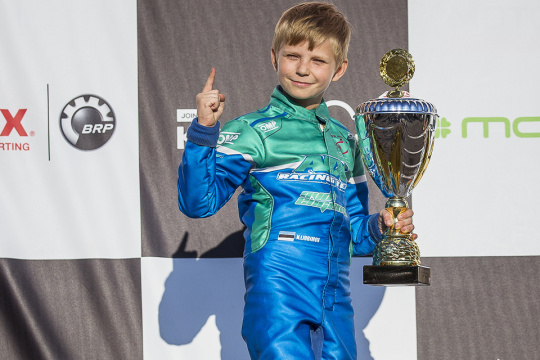 Author: Vroomkart International
The last edition of the Vroom Award was a success and above all an edition full of novelties, such as the one concerning the youngest ever winner.
Nikita Ljubimov, who entered by right in the list of candidates for our award, especially after winning the Micro Max title at the Rotax Grand Finals in Bahrain, reached record numbers during the voting days. A great following that of "Nik" that led him to success, even in this special ranking.
Considering that the last Estonian Rotax champion (Juri Vips), currently runs in F2 and has just tested the Red Bull of Max Verstappen, Nikita Ljumibov can only follow the path already traced. An incredible result for our youngest winner (just 10 years old), a strong signal for the Rotax world and for Estonian karting that has in Ljumibov the next great promise. Ljumibov received many votes for the little Estonian, already a protagonist on the track even before the Grand Finals, known for his comebacks and overtaking as a seasoned driver.
NIKITA: «It's hard to explain my feelings, I don't feel like a world champion yet, everything happened very quickly). The place, where RMCGF tоок place, is of extraordinary beauty! The Kingdom of Bahrain will forever remain in my heart and memory, as the most hospitable and friendly country. It was a dream to walk into the places where the best drivers in the world race and where it is incredibly difficult to get in. It probably gave me strength for the race and inspired me to fight for the win. I was hoping to at least finish in the top 7-8th at the Grand Final. Although I realized that all the champions of their countries were on the track and it was just amazing to race among the best drivers from all over the world and to be part of such a level of competition. The race in Bahrain was difficult. At the beginning of the practice days, it was not so good, I assumed it could be. I tried to drive a hobby kart, but it was too big for me, so I did 7 laps just to learn, where you turn left or right and got off the track. I knew that a lot of other competitors had been to visit the track before, some of them even did their races there, just 1 or 2 weeks before the Grand Finals. They had experience on the track and had driven 100 rings or more. I only had 7 sessions to drive. At some point, I realized that it's not going to be that easy to get even in the top 20 drivers. At the end of the first day of practice me and my mechanic Luka analyzed all the difficulties of the track, we set the chassis. Luka gave me the main tips on trajectory and braking, and on the second day of practice, I was already on top of all the guys. At first, I was very upset that I didn't get the pole position in qualifying. My mechanic advised me to do 6 practice runs on my own (and I did), especially without a slipstream. I only did one practice, trying to take the slipstream and overtake. So, I was looking in qualifying for wind from someone fast, but it didn't work. I'm thankful to my mechanic, because in the race he helped me drive myself and became my strongest part. When I went first in the final race, I just needed to go 4 or 5 karts ahead so no one could catch me or wind behind me. I was confident in my abilities and strength for the final because I was the fastest in all warm ups and the next 3 races (2 heats and pre-final). Mostly want to thank people ,without whom this win was impossible Luka Medunitsa (my teacher, trainer and mechanic) for his patient, Ardo Virula (engine engineer Avd Engines) for greatest Rotax engine set up in the world, Aivar Korjus (team principal Aix Racing Team) for support during race weekends, my parents, relatives and closest people for each day support ».

On Estonian karting Nikita specified: «The Rotax Max Challenge is not very appreciated by the Estonian Karting Union or the Automobile Federation in Estonia. It doesn't matter much for them, but for other people, who are involved in karting and love it from all sides, no matter in which class you became a champion: Cik-Fia, X30 or Rotax. Actually to say that is strange and unfair for all drivers, boys and girls who are involved in Estonian Karting, because this season we had almost 30 drivers in Rotax Junior and only 14 in OKJ, Rotax Senior 26 drivers and only 8 in OK. So you can understand me».
A future in karting beyond the Rotax world?
«This year I am moving to the next Rotax Mini Max and Mini 60 class. I'll start from the Rotax Winter Cup and then move on to Jesolo or Genk (Home of Champions track), because I was one step away from winning the Golden Cup last year, so I still want to get this beautiful Tropfey there. I would also like to start from WSK, but we decided to make a little brake and plan the Italian trips after the Rotax Winter cup. So if it will be possible, I will join races in Lonato, La Conca or Sarno. I still have time to drive in WSK because I am only 10 years old and I see that there are 12-13 years old guys driving in Mini60. How they manage to configure the chassis and engine tuner you have, compared to the real driving skills, at least at the Mini60 level.  This is my opinion, maybe I'm wrong».