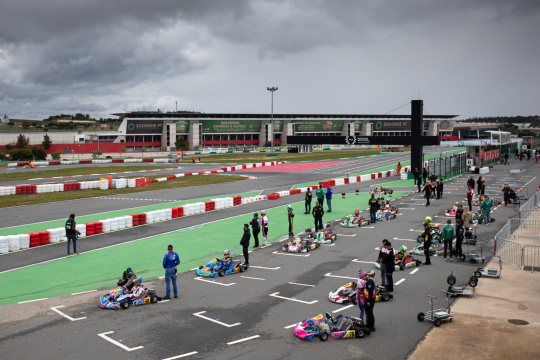 Author: Vroomkart International
The Euro Series Champions Of The Future is ready for its first chapter of the season, this weekend it will be Portimao that will turn the spotlight.
When the COTF is ready to take to the track it means only one thing: European Championship is near. On the "Kartodromo International Algarve", in fact, in the upcoming weekend all the protagonists of the season to Presa Diretta will meet after the Winter Series of Franciacorta.

This is an important occasion for everyone, not only to learn the track and the details purely related to driving, but above all to get into the right physical and mental condition that the FIA Karting context requires and, obviously, to prepare the best set-up and collect useful data.

There will be 128 drivers of the two categories, exactly equal number between OKJ and OK.

In the Senior category all eyes are still on the team which, right here in Portimao, on the occasion of the 2020 World Championship, scored a historic hat-trick. The Tony Kart trio, made up this time of Luigi Coluccio, Tuukka Taponen and Joe Turney, will once again work to put the rest of the entry list in line. Great responses are expected from the Birel Art, CRG, Parolin and RFM drivers, already competitive in the first part of the season, including Franciacorta. Eyes also on Tomass Stolcermaniss, recent winner of the first trophy offered by RGMMC.

The hunt for the top name, as always, in the Junior field with all the teams full and the protagonists of Franciacorta ready to repeat, starting from Maciej Gladysz (winner of the Winter Series), Anatoly Khavalkin (Parolin), Kirill Kutskov (Birel Art), Andres Cardenas (Energy Corse) and Oleksandr Bondarev (RFM) among others.

There is a high probability of rain on the Portimao kart track, a possibility that should not be ruled out for the European Championship in a fortnight time. Official qualifying will start tomorrow morning, leaving space for the heats between Friday afternoon and Saturday. Grand Final scheduled for Sunday, March 27.