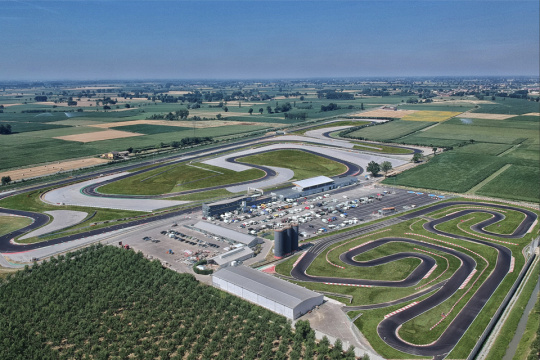 It must be said that the track is still little known and it is mostly frequented by drivers from the neighboring areas. Few people were expecting this choice, but ACI-Sport and CIK FIA have seen and appreciated the facility and wanted to bet on this track.

The track - begins Ennio Gandolfi - has a straight of 220 meters, with turn 1 and the next hairpin perfect for overtaking. The 60-70% of the track is suitable for overtaking, also because it combines medium-fast stretches with slow parts and chicanes.
You have to be very fluid in driving - continues Gandolfi - because to go fast you have to use long ratios and to get a good time you have to drive perfectly in the mixed section, with two left turns to be done in full fourth gear followed by two hairpin bends in second gear. In this section, it is fundamental to be in good synch with the chassis and the engine/gears. In short, a 1200m circuit that is definitely not  easy!

At the end of the straight, the KZs can reach 142 km/h. For now, in the races held in KZ the times are around '47-'47.5, but the expectations for the European are around '46, although Ennio himself admits that even lap times could reveal more surprises given the high level of the drivers.

From a historical point of view, the old kart track was established in 2015: initially 1 km long with half the current space, hosting mainly Kart Sport Circuit races. In November 2019, the track was completely redone, lengthening it and expanding the paddock to 25,000 square meters (paved and with power and water outlets). The adjacent building and racetrack were also renovated. The kart circuit has indeed all the facilities of a racetrack with a bar, restaurant, kart store, and photographer's shop. Before the European Championship, on April 10, the second stage of the ROK-Cup Italia will take place, and may the best driver win.