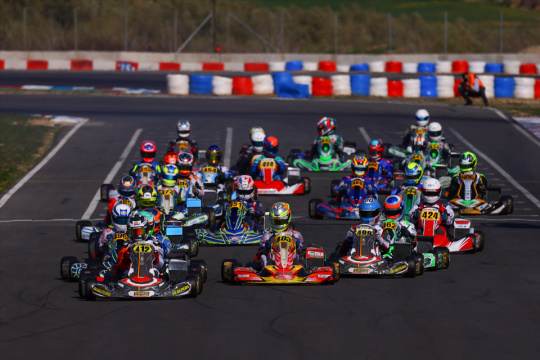 Author: Vroomkart International
With no real surprises, the winners of the RMCET Winter Cup titles shone through when it counted most and the racing brought out some deserving accolades too. The champions: Albert Friend (Mini MAX), Ethan Jeff-Hall (Junior MAX), Callum Bradshaw (Senior MAX), Martijn van Leeuwen (DD2) & Martynas Tankevicius (DD2 Masters). (J.W. & Photos Hellofoto)
It was back to sunny skies with a chilly breeze in the Andalusian region of Spain Sunday for the Rotax MAX Challenge Euro Trophy Winter Cup finals. Highlighted by the competition being closely-fought at the beginning of the season has set precedence for what can be expected at the international series this year. For podium place-getters, the prizes included free entries for selected RMCET rounds in Belgium, Italy and Germany, together with RMC International Trophy 2022 entries for Le Mans. In general, the competitors, teams and supporters were happy to be back on track racing.

Mini MAX – Picking up where he left off Saturday, Albert Friend continued to be the first to the finish line once again in the initial pre-final on the program at Circuito Karting Campillos and Boaz Maximov took second ahead of fastest qualifier Nicolas Garcia Diaz. The Spanish driver was still determined to stand on the top step though and in the final, was almost glued to the bumper of Friend, while they swapped quickest times over the 11 laps. Friend pushed hard and ran slightly wide on a couple of occasions, until an exciting last lap where Garcia Diaz surged into the lead. But the Dan Holland Racing driver from the UK succeeded in getting it back before the chequered flag to end a sensational battle with only 0.046 seconds separating them. Rounding out the podium was the Belgian Micro MAX champ and Golden Trophy winner Maximov, with Nikita Nikishov 4th and Marcel Zsebo 5th. The Mini category for ages 9-12 was introduced in this format for the first time at the RMCET and the racing within the field from 11 different nationalities offered great experience.

Junior MAX – Aron Krepcsik off grid 4 grabbed the lead in the pre-final from pole-sitter Scott Marsh during the opening laps, until Ethan Jeff-Hall relegated them both to minor positions to take line honours. However, a front fairing penalty dropped him back to P4 which meant the Hungarian inherited the win over Vic Stevens and Marsh, while Austin Lee maintained his 5th place. The final saw Krepcsik and Vinnie Phillips get the jump, as Marsh and Jeff-Hall shuffled for positions at the head of the group with Stevens, Lee, Enzo Bol and Leon Zelenko as a terrific race unfolded. Jeff-Hall stole P2 and Marsh followed behind, but when Krepcsik started defending Jeff-Hall signalled his compatriot to keep chasing. With two laps to go, they past the leader and Jeff-Hall got the break he needed while his rivals went wheel-to-wheel, rubbing tyres. Marsh’s kart mounted Krepcsik’s rear bumper so he dropped to P6, handing Stevens 3rd from Philips and Zelenko. Tommie van der Struijs and Karel Staut recovered well from a difficult lead-up to the finals to finish strong within the top 10. Ethan Jeff-Hall once more showed the form that saw the British driver win at the RMCET in 2021.

Senior MAX – The only one to break into the 1:02s in the MAX class Sunday was David Aulejtner and despite having a faultless record during the heats, he found himself spun out of contention in the final. Sean Butcher overtook him for the lead in lap two of the pre-final, which was short-lived when Callum Bradshaw moved up to control the race from there in, while the rest diced for places behind. The Polish pace-setter started the final on the second row beside Butcher’s teammate, Archie Walker, who crossed to the inside as they approached turn 1 and they collided, fortunately not in the line of the accelerating field, leaving them to re-join the race at the back. Out in front, Bradshaw was challenged early by Butcher alongside him, but the current Euro Trophy champ didn’t flinch and kept his focus to claim another major title with a double victory Sunday. In the fight for the podium, his fellow team member Connor Jupp was off in the dirt momentarily, after passing Kai Hunter for P3 he clipped the back of Hunter’s kart as he regained his position up the inside. Finland’s Miska Kaskinen made his own move for 3rd place. The RMCET Junior champion Kai Rillaerts stepped up the pace to take P4 from Zsombor Kovacs for an encouraging result in his rookie season; although the Hungarian fell to P8 with a bumper penalty, making it P5 for the other senior Kai [Hunter]. Strawberry Racing therefore scored two RMCET Winter Cup titles including Junior MAX.

Rotax DD2 – Martijn van Leeuwen never looked like losing and literally outdrove anyone who considered the idea of taking his Winter Cup home. For the Rotax DD2 World number one [aka Dreezen by the racesuit], it was an outstanding performance following his victory in Bahrain.  The pre-final placings were top 3 Patriks Locmelis and Ragnar Veerus, then the leader’s teammate Maxim Drickx, with RMC International Trophy and British champ Rhys Hunter winning the action-packed duel for P5 from Ville Viiliaeinen; Xander Przybylak and Mathias Bjerre Jakobsen bowing out from post-race penalties. Although Van Leeuwen led from the lights in the final as well, Rhys Hunter pounced in true ‘Hunter’ style, to be sitting in second within the opening lap and have the leader in his sights. A full course yellow was called twice to rearrange the barriers and the field bunched up, so it almost felt like the F1 decider behind the pace car all over again… but with the Dutch Schepers Racing champ on pole, he was unbeatable, launching himself to take the victory by over 1.5 seconds. Rhys Hunter was pleased with his vice champion’s title though. Drickx tried for a move on Veerus in P3, but had Locmelis and Viiliaeinen, over his shoulder, so he was 4th and Viiliaeinen confirmed 5th.

DD2 Masters – Just over half a second covered the first three drivers in the pre-final when the official result classified Jonathan Wemaux the winner over Bruno Dos Santos for a French double. Finishing 3rd, Martynas Tankevicius had overcome front row starter Pritt Sei in a Baltic challenge, split by former Rotax champ Christophe Adams in P4. The collective efforts of the poleman Rudy Champion fell short after a penalty left him starting the final at the end of the grid. Wemaux was still one of the quicker drivers, leading the first of 15 laps in the last race ahead of Sei and Belgian Carl Cleirbaut, until Tankevicius got into P1 and progressively stretched the gap to nearly five seconds to take victory for Lenktyniu Linija. Dos Santos worked his way through to trail Wemaux and complete the podium, while Sei finished in P4 just ahead of Cleirbaut. Champion was close to a potential top 5, but the RMCIT 2021 winner had to settle for P7 behind Adams.

Watch all the racing action online from the RMCET Winter Cup including the race videos on YouTube, as well as the full day’s LIVE coverage from both Saturday and Sunday on the Camp Company channel – https://www.youtube.com/c/CampCompanyGmbH/videos

Download the Rotax Global App from the App Store or Play Store to have complete access the direct online links, entry list, track info, results and event details on your mobile device