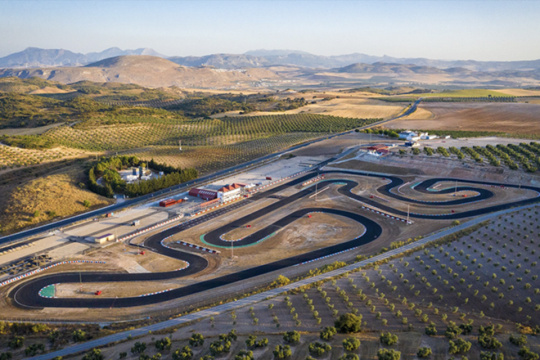 Author: Vroomkart International
The track action continued with qualifying heats Saturday and literally provided a ‘wake-up’ call for many competitors, that they will have to work to be at the top (J.W. Credits: © HelloPhoto)
The first outing of the season on the International calendar of the Rotax MAX Challenge Euro Trophy has seen a welcome return of the Winter Cup at picturesque Circuito Karting Campillos this weekend in Spain, where 156 participants are going head-to-head in the five Rotax classes being contested. The 1,580-metre track is fast and the racing is proving to be a challenge, considering the nature of the layout and the importance of getting the advantage of a slipstream, all along dependent on the difference the drivers make in racecraft and strategy, when the material itself appears to be close in comparison as well. And the winners are clearly just doing it all better.

The fastest qualifiers on Friday were not all able to convert it into retaining their position following the heats, but they are still in contention for the victory. However, in all but one class, pole position for Sunday’s pre-finals has been secured by drivers who made it a clean sweep in their three races.

Mini MAX – Albert Friend took the honours in every heat to lead the youngest class of 24 entries going into finals day on Sunday. Dutch driver Maximov Boaz was also impressive, having two second and a third place to join the Briton on the front row. While pole-sitter Nicolas Garcia Diaz tried hard to win on home turf, he was consistently fighting at the front and had a top result of P2. The Spaniard will start on grid three alongside Rory Armstrong, who was the second best qualifier. At times on Saturday, the long train of karts dicing for positions resonated the feeling that there’s a very promising new generation of great little race drivers on the horizon, including the 2021 Micro MAX champion and Vroom International Magazine #1 ‘Driver of the Year’ Nikita Ljubimov.

Junior MAX – Nothing separated the British duo of Scott Marsh and Ethan Jeff-Hall in the points after the racing, where they were also quickest in track, but Marsh qualified on pole Friday so his single victory and twice second in the heats outweighed Jeff-Hall’s two wins. Several others were in the leading mix, including Belgian Vic Stevens and Hungary’s Aron Krepcsik taking a second place, lining up respectively on row two for the pre-final. P2 in quali, Leon Zelenko suffered one disappointing result after being third in two heats, so the Croatian cannot be discounted. In fact, there is still any number of Juniors that we can expect to see climbing up the order in the finals.

Senior MAX – Following a strange situation in Group 1 qualifying that left 20 drivers with penalties for impeding other karts, including some of the session front-runners, Kai Hunter then topped the timesheet in Group 2 and fastest overall. He was just one of four competitors who took victories Saturday and on a longer list of drivers who were all inside the first five in the races. However, the man of the moment was without doubt Poland’s David Aulejtner, ranking seventh in official timed practice then proceeding to take the triple win in the heats. His teammate and the defending RMCET champion Callum Bradshaw won the opening race, while fellow Brit Sean Butcher claimed the remaining one plus a double P2, to give him a front row start for the pre-final. Kai Hunter will line up beside top three place-getter Zsombor Kovacs on row two ahead of three of the fastest guys in the racing; Connor Jupp, Bradshaw and last year’s Junior Euro champ and Rotax number 3 Kai Rillaerts. Italy’s Elia Pappacena started on the front row in the heats and ended up mid-pack, having fought the intensity of this highly-competitive class of 56 drivers, some of which will face their Winter Cup final campaign in the second chance race Sunday morning.

Rotax DD2 – The recently-crowned World number one, Martijn van Leeuwen, is riding high and looking confident to add another title to his career portfolio, qualifying first and winning all the heats in the 2-speed gearbox category. Could it be the luck of the racesuit he wore of another well-known champion from years gone by, Rick Dreezen, that added to the unmatched speed of the Dutchman? It was a close duel for places between the Estonian Ragnar Veerus, second in qualifying, and the number three in the world ranking from Bahrain last December, Patriks Locmelis of Latvia, split by only one point in the final tally. Once more, Veerus will start from the outside of the grid in the pre-final then Locmelis and Lukas Hartmann, whose German teammate may have been the one most likely on P2. Finn Stiak posted third best laptime Friday and had two second place finishes, but a penalty took him out of heat 2 so he now starts from tenth. Right behind him, British MAX champion Rhys Hunter will be on a mission to make up lost ground from a retirement, running in the top five.

DD2 Masters – A familiar player from the podium in the RMCET Masters class, Rudy Champion was the class act of the 32+ category, unbeatable in every session from qualifying through the heats. Carl Cleirbaut may have hoped for more from his front row start, he’s off grid 4 beside long-time Belgian rival Christophe Adams; each with a best third place result. With a double P2, Sei Pritt from Estonia secured grid two after winning most of the battles on track, meanwhile second place in heat 3 was Martynas Tankevicius, clocking fastest lap in two races and ranked sixth. Including the poleman, there are five French drivers in the class, Bruno Dos Santos was a race pace-setter and Jonathan Wemaux improved for third in the late afternoon heat. It’s shaping up to be a very interesting final!

Live coverage begins on Sunday, February 20 at 10.10am after the warm-up sessions.

Download the Rotax Global App from the App Store or Play Store to have complete access the direct online links, entry list, track info, results and event details on your mobile device