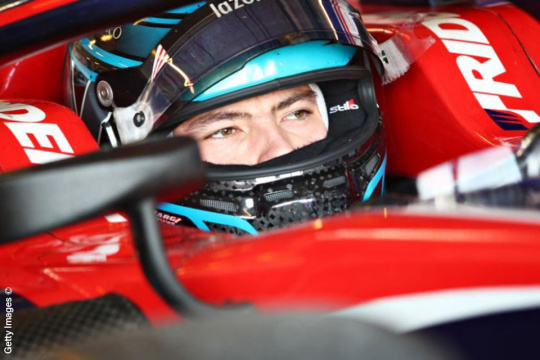 Author: Vroomkart International
We met Calan Williams - a rookie in Formula 2 with Team Trident - at the "super physical" track in Borgo Ticino (one hour from Milan), during a kart training session.
The 21-year-old Australian, who now lives in around half of Europe, was on track to train together with other team drivers, supported by mechanics and by Team Manager Giacomo Ricci. Karting is in fact the best gym before the collective tests in Bahrain and is the suitable complement to the intense training he carries out at the "Formula Medicine" of Dr. Ceccarelli. For the day, the Formula 2 driver used special 175 cc Iame Super Shifter KZ engines.

Alan, what are the main differences between a Formula 2 and a kart, considering the fact that in kart you drive with your whole body while in Formula 2 you only use ankles and wrists?
Yes, there is a lot of difference, but they’re also similar enough to get a good workout, which is why I do it with the Team. The first difference is that the kart’s very light and your body weight affects a lot of the total weight and so as you said you use your whole body in karting, also, as it makes a big difference where you move, how you drive it, etc., whereas in a Formula 2 the situation is completely different as the seat belts keep your whole body strapped inextremely tightly! So actually even if you want to move you can't move and that's a big difference. For me, what makes karting a great workout is the fact that everything happens very quickly. You can put on some very grippy tires and you have some G-Force too. It is really a great workout especially on the mental side of it: you get used to reacting quickly and staying awake, sharp. On a Formula 2 circuit,there is more speed, but the straights are also much longer. On a kart track, there are practically only curves! You have to be constantly responsive and it's very good training for that.

In KZ it's like being on a frisky, prancing horse. What is the difference in feeling between a kart and a Formula 2?
The feeling is very different. In Formula 2 you have an elevated G-Force and the steering is very heavy, so you have to be physically stronger: you have to have a strong neck, be very gym-trained, have strong arms and a generally prepared body. While in karting, what you need to be fast comes from being able to react quickly and beingmentally sharp. I think combining the two sports is very positive for me in Formula 2. Training in kart I think helps me to develop extra skills on my car.

We know that you raced with Rotax in Australia. Can you briefly tell us about this experience?
Yes, I raced in Rotax in Australia, in the Junior MAX category. I raced mainly at the local level, participating in events such as the National Championship and events in Western Australia with some bigger events nationally, but I did mostly local races. When I was younger in the lower classes I did a couple of races at the national level, considering that moving around Australia had big travel costs for us from the West. So I tended to stick to local events until I switched to cars - I still have great memories of my experience in Rotax. The level of competition wasvery good and we competed often, twice a month, even three at times. Starting in motorsport at the age of 7 was a very positive experience.

This year you wil havel on the track an opponent who comes from the SIM world, Cem Bolukbasi. What "educational" value do you think karting has compared to a simulator? What are the pros and cons (if any)?
Both are pretty good tools in order to develop. I think they can also be used together for training, why not. It depends a lot on the person because I'm sure if you ask people "do you want to start with karts or a simulator?" you would have different answers: probably some would prefer one or the other without having doubts. But an important part of motorsport, especially when you're starting out, is having fun and having the passion. So I think when you start for the first time it's important to do what you like and some people might like the kart more, while others might like the simulator more. I think obviously the most important difference is that in SIMs there's a lot less physical strength involved, whereas in karts, there’s plenty more, and how. I think a combination of the two is the optimal solution.