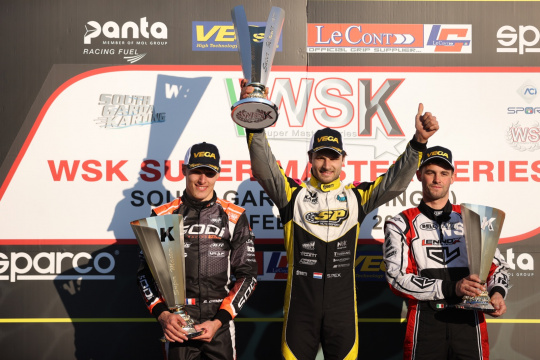 Author: Vroomkart International
The curtain also falls on the second round of the WSK Super Master Series. Pex (KZ2), Taponen (OK), Fluxa (OKJ) and Pesl (60 Mini) win the finals.
After a Saturday certainly over the top in some respects, the four categories completed their programmes, awarding more points for the Super Master Series classification. Three out of four poleman managed to confirm their position, triumphing under the chequered flag.

The new KZ2 is starting to take shape, albeit with a few exceptions and "last minute guests" at the final party. The second round goes in the hands of a sumptuous Stan Pex, more fit than ever with the colours of the team that, among other things, bears his name, able to excel before the official teams to the sound of driving technique and consistency. The Dutchman was able to wait and then attack a few laps from the end the rival of the day David Trefilov, hope for Maranello Kart. Once in command, Pex has been able to keep up with the train behind him composed of Trefilov (to keep an eye on the races that will count even more) and the newfound Emilien Denner, confirmation of the army Sodikart despite a seizure Saturday morning, quickly forgotten. Sparks between Denner and Trefilov with the German getting the worst of it in the final stages, all in favour of Matteo Viganò, back on track after his victory in the Skusa SuperNats 2021 and third on the podium. Fifth position for Pedro Hiltbrand, out at the end of the first lap Jeremy Iglesias after a race contact.

The OK changes face but not the colours of the winning team, thanks to the relay between Tuukka Taponen and Luigi Coluccio. The Finnish driver immediately seized the opportunity to get back the leadership in the category where he is the reigning World Champion, snatching the pole position from Coluccio in the morning and keeping the competition at bay in the final. Behind the winner, a fierce fight between Alex Powell (protagonist of the weekend) and Luigi Coluccio, already at loggerheads in the pre-final and still fighting for the podium. Second place in the hands of the Jamaican, third Coluccio, however, still in the winning train.

Fight in two for what concerns the Junior with two new faces. Were in fact Lucas Fluxa and Oleksandr Bondarev to give spectacle in the last seventeen laps of the weekend. The Ukrainian did everything he could to complete the work starting from pole, but had to give up after the attack of the Spaniard with five laps to go. The podium was completed by FIA Academy Trophy champion Maciej Gladysz.

The new course of the 60 Mini, for now, seems to have only one master: Jindrich Pesl. The driver from the Czech Republic maximized the pole position to aspire to the success, taking behind a good Filippo Sala and Dries Van Langendonck.