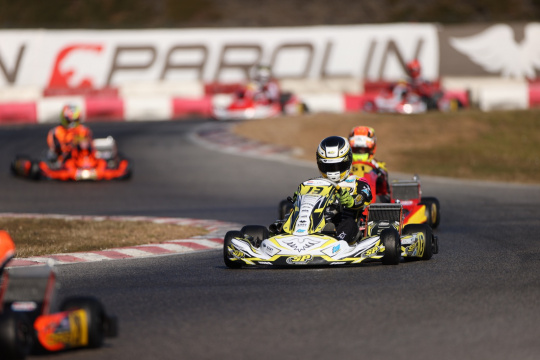 Author: Vroomkart International
Since the first heats of the morning, unfortunately, accidents have characterised the course of today's programme.
Heats mowed down by mistakes and caramboles maybe due to an excess of agonism, so that the yellow flags and the slow regime are called in several times to remove the karts from the race. "Dangerous trail" that once again causes concern in the paddock between insiders and fans with the vehicles reaching high speeds and reckless as regards the Mini and Junior.
But sparks were registered in all the categories, noteworthy the crash between Emilien Denner and Paavo Tonteri in KZ2 with the French driver surprised by the seizure of his engine, then finished in the middle of turn 1 after the crash with Paavo Tonteri behind him, all luckily without consequences, as well as the rolling of Orjuela under Slow regime.

In KZ2, Stan Pex leads the classification ahead of tomorrow's pre-final with two seconds and a third place. He is followed by the duo Viganò - Hiltbrand. Back Iglesias, Denner, Van Walstin, Palomba and Gustavsson, all slowed down by accidents, withdrawals or penalties.

60 Mini, also marked by retirements, with Jindrich Pesl in clear advantage over the competition. Virtual pole position for the second pre-final in the hands of the Spaniard Costoya.
We remind you that with the new system, the results of tomorrow's pre-finals will be added to the heats, delineating the qualifiers and the starting grid for the finals.