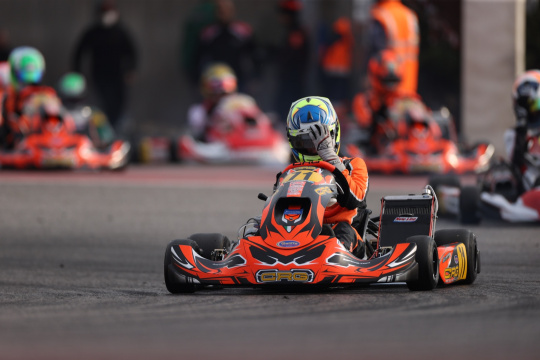 Author: Vroomkart International
At the second round of the WSK Super Master Series, different results and values on the field in the four categories compared to a fortnight ago.
In the second weekend with WSK traction the results are different from the first official outing.

In KZ2 Emilien Denner makes a comeback by redeeming the first appointment of the Series which started badly and ended worse. The French driver of the Sodi Kart takes the absolute pole position, preceding his always fearful teammate Van Walstijn. Will they be the two to play for the victory? A question that begins to leak out in the paddock given the great competitiveness of the French line-up. All agree, however, the return to the track of the World Champion KZ2 Lorenzo Travisanutto, immediately in the pack of fray and now fully in the tussle with the drivers belonging to what will become KZ European Championship. Also worth mentioning is the march of Viktor Gustavsson, very much in symbiosis with his CRG, which could be a confirmation of the Swedish talent and the All Blacks team.

In the OK category it is still the Italian drivers who make the difference, with Luigi Coluccio dominating the scene in the Senior category, confirming his pole position in the group and pulling behind Cristian Bertuca, first of the Birel Art and fourth overall. Matheus Ferreira and Alex Powell, the other two group pole positions, cannot be underestimated.
New names in OKJ, surprisingly led by the Spaniard Luca Fluxa, proactive also in the first heats. Open fight also for Douwe Dedecker, Enea Frey, Nathan Tye and Zhenrui Chi, all new faces at the top of the classification, under the sign of the generational change.

In 60 Mini, space to the Lithuanian Ainis Vibriantis, also a debutant, far from the top teams.