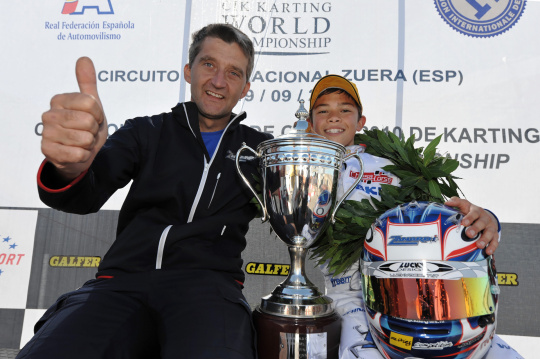 Author: Vroomkart International
For those of you who think motorsport is somehow meritocratic, or if you're the kind of person who gets pissed off 'because a kid I know who's going so fast has run out of money', the story of Nick De Vries might make you very angry.
If, when you think of a Dutchman who is an unbeatable driving talent, you think of Max Verstappen, you are right. However, if you're a real fan of the sport, thinking about Holland also brings Nyck to mind. The boy (that's right: he's just turned 27: he's still a boy) has had an extraordinary career in karting and is one of the few professionals in motorsport with a double world title in the single-speed karting classes.

In 2010 he won his first title at Zuera with Team Dino Chiesa and the Zanardi chassis: that year, even before winning his first title, he was flagged up as one to watch by McLaren who enrolled him in their Young Driver Program (more or less like Ugo Ugochukwu a few months ago...). In 2011 he doubled his title in KF1 (now OK) and seemed destined for a golden career in single-seater too. In fact he did very well just past in cars too: he won both the Formula Renault Eurocup and the Formula Renault 2.0 Alps Series in 2014. He then scored a sixth place in GP3 with ART and had his hardest time when, at the end of 2016, McLaren's financial support failed: you know how 'academies' work. He still made it to F2, but with a second-tier team and only started winning when he moved to Prema Racing, where he got a real second chance, in 2018. In 2019, ready to be at the top again, he didn't disappoint those who believed in him: in fact, De Vries won 4 races and grabbed the title.

Despite this, no automatic jump to F1 as happened to other GP2 champions like Pierre Gasly, Stoffel Vandoorne or George Russell. He got his chance as third driver at Mercedes - a fairly 'virtual' opportunity - but was then diverted to Formula E, where guess what? He won the title in his second year and is still one of the favourites for the Encore. Some say: some drivers only decide to pursue the F1 dream if a place is available in a team that makes sense to drive for, and Nick may be one of them. In the meantime, time passes and despite looking like a teenager, the Dutchman is now at an age that some consider too 'advanced' for F1, while it's obvious to anyone that far less talented drivers have put their signature on that grid. At the end of 2021 rumours had him as a possible Williams driver, who then preferred the returning Albon on the unconvincing grounds that "Nyck is an excellent driver but lacks experience". A clear case of how a series of 'sliding doors' often dictate the path of an athlete towards success or towards what for some is the only pinnacle of motorsport, Formula 1, Nick is also an example of how victories in cars of all types, regardless of the arguments of circumstance, are the best possible response to the qualities of a driver.