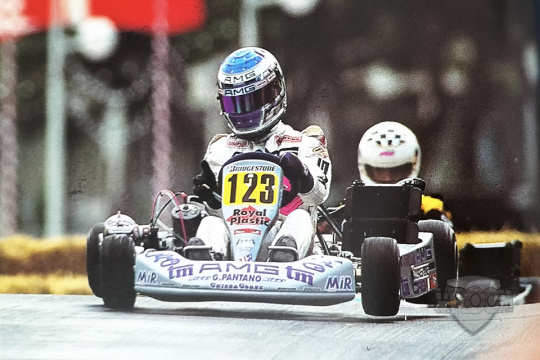 Author: Vroomkart International
In the karting world, he has remained in the hearts of many for his driving style. One of the first to show the “AMG” livery on karts in the late 1990s, he has won plenty in karting.
In addition to various Italian Championships, he was Junior World Champion in 1993, European and World Champion again in Junior in 1994, twice European Formula A Champion (1995, 1996); when things "went badly", as in 1997, 1998, and 1999, he nonetheless finished on the podium of the World Championship in the Top Class (a memorable 3rd place in Mariembourg in Formula Super A in 1999, starting 34th). His car career has been, despite his talent, a roller-coaster ride: after his victory in the German Formula 3 Championship in 2000 and a brilliant debut in F.3000, he made his early debut in Formula 1, but with a team in crisis (the Jordan of 2004) and with performance below expectations for reasons not attributable to the driver born in Padua, Italy, in 1979. Undeterred, the determination to challenge himself was never lacking in Giorgio, who humbly later distinguished himself again in minor categories – and even a few races in Indy Cars - that could have brought him back to the most important stage for a driver.

After a few years with a non-top-tier Team in which, regardless, he finished 5th and 3rd places in the GP2 Championship, in 2008 Pantano managed to establish himself in the Championship (beating drivers such as Romain Grosjean, Davide Valsecchi, and Sebastien Buemi),but unfortunately the call for a return to Formula 1 did not come - not even in the form of a test. Much bitterness, asthe victory in that series had come from driving for a small team that Giorgio himself had brought to victory, unlike other drivers, whom some sometimes preferred because they were immediately successful, with a much higher-level Team. Pantano shall again be a protagonist in Indy Car and GT, before returning to his first love, karting, first as Team Manager and then as a manufacturer. Happy birthday, Giorgio, and all the best!