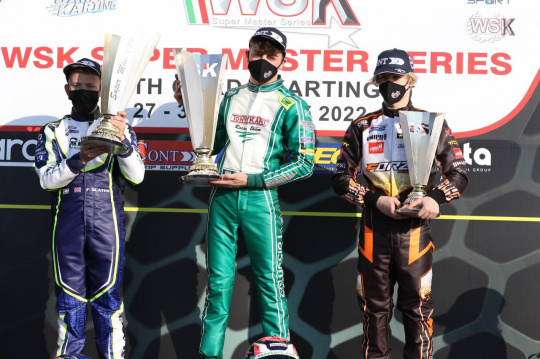 Author: Vroomkart International
The first weekend of races of the new year gave the first answers and points of reflection on the four categories on the track. Victories for Coluccio (OK), Lammers (OKJ), Van Walstijn (KZ2) and Van Langendonck (60 Mini).
OK - Coluccio leads the OTK parade
It is a Senior that, at the moment, speaks Italian thanks to the first "clapperboard" of Luigi Coluccio. The Apulian driver has given continuity to the project that had launched him first with the Kosmic colors and now with the Tony Kart ones to gain a respectable place in the Olympus of the category. Perfect weekend between heats, almost completely dominated, pre-final and final showing a race pace of total control over the competition. The only blemish was the qualifying session which, according to Coluccio himself in the paddock, was not purely lucky (traffic on the good lap), but widely claimed later. In addition to the Italian, immediately winning, to record the great test of strength of OTK material able to open the 2022 with a five. Second position for the "rookie" Freddie Slater (Ricky Flynn Motorsport), long awaited after an arrival in Senior sometimes postponed but propitiated at the right time by a good silver medal. Third Gustaw Wisniewski (Forza Racing), new arrival of the British team, positive in the conduct race and brawl with the World Champion Tuukka Taponen (Tony Kart) in fourth place, concludes the five James Egozi (Tony Kart), also among the "rookie terrible" of this first event. The impression is that OTK has many arrows in its bow to be able to excel in the new season, the signal is certainly the podium composed by three drivers of three different teams, respectively with a Tony Kart chassis, Lando Norris and Exprit.
In the first ten positions, there were also eight "twin" chassis OTK chassis, except for the good sixth place of Cristian Bertuca, first of the Birel Art, seventh Enzo Deligny with the first of the Parolin.

OKJ - Bondarev penalized, space to Lammers
Slightly different music in the first appearance of the new Junior drivers, bound by surprises and confirmations of the first hints of the end of 2021. Parolin Racing is back in front with the Dutchman Renè Lammers, already very promising in the 60 Mini period and immediately at ease with the leadership of the new category, built up by three victories in the heats and by the success in the pre-final. A path that, combined with the race pace, allowed Lammers to take advantage of the 5sec penalty (spoiler rule) imposed on Oleksandr Bondarev (RFM) to win. The Ukrainian had in fact crossed the finish line first, then dropped back to fourth position. Podium completed by Dmitry Matveev (Koski Motorsport), another profile to keep an eye on after the great performance of a few months ago at the World Championship of Campillos (Spain) where he risked for a long time to become Champion. Bronze medal to Kirill Kutskov who, with eight positions gained, marks the first podium of the season for Birel Art.

KZ2 - Sodi currently unstoppable
In KZ2 it is still a party for the Sodikart colors, more than ever on the shields after the victory of the Champions Cup and the great show of strength of the first Super Master Series of the season. The French team could count once again on the great maturity achieved by Senna Van Walstijn. Despite the lack of absolute pole position at the end of the heats, the Dutchman's weekend never seemed to be at risk, showing superiority until the checkered flag. With these two first signals, Sodikart could seriously declare "war" on Birel Art, always alert and on the podium thanks to Pedro Hiltbrand, at his first race as "Red Army" driver with eleven positions recovered. Definitely surprising also the weekend of Maranello Kart, at the top after the reorganization of 2021, constantly in the lead with the German David Trefilov, who started from the pole position. Four different manufacturers in the first four positions represented by the consistent race of Jeremy Iglesias. First step marked CRG towards the discourse started at the end of the FIA European KZ and KZ2 Championship of last season.

60 Mini - Van Langendonck rapacious
Good first race also for the 60 Mini, more than ever in an embryonic phase and to be understood on the basis of the new protagonists, but certainly very hard fought. With the "usual" three changes at the top, the very final was filed by the overtaking at two laps to the end of the Belgian Dries Van Langendonck (Parolin), winning with three positions recovered and almost a second gap on Jindrich Pesl (BabyRace), started from the pole position. The final podium is completed by Christian Costoya for the joy of the Parolin team, one of the most positive at the beginning of the season.
S.C.
Photo: Fotocar13