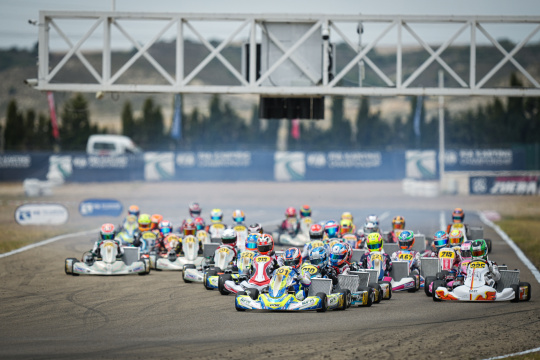 Author: Vroomkart International
The WSK Super Master Series will open the 2022 season, with more novelties and confirmations in the line-up of the teams.
A season "kick-off" which has been forced to change its location in the last days, passing from Adria to Lonato after the events linked to the Venetian venue of the previous days.

First call for all the four categories, almost fully booked, in view of the topical appointments of the FIA Karting season and not only. The entry-lists of the first round of the WSK Super Master Series have "revealed" the remaining teams' line-ups, which had not yet made official the forces in the field for the season.

Starting from KZ2, as we had already said, CRG will line up Viktor Gustavsson and Natalia Balbo as new arrivals. Official confirmations for the 2020 World Champion Jeremy Iglesias, at the second year of his "All Blacks" project, alongside Alex Irlando, Paavo Tonteri, Jorge Pescador and Brandon Nilsson.

Among the manufacturers, also Maranello restarts with the SRP Racing division, led by David Trefilov, protagonist of the last KZ2 Super Cup, Nikita Artamonov and Ivan Klymenko. Absent from the track, at least for now, Fabian Federer.

First fight of the season also for Stan Pex (SP Racing), expected at the top of the ranking, also Arvid Lindblad (SP Racing) is present at his debut in the queen class after his high performance in OKJ and OK. New name under the Tony Kart tent compared to the last update, the Spanish girl Laura Camps Torras, winner of the last "Girls on Track - Rising Stars" and new Ferrari Driver Academy driver.

In OK category other unveiled line-ups starting from Lennox Racing with Nathan Shaap, Rafael Modonese and Maksim Angelard. On the other hand, Parolin Racing will still line up Enzo Deligny and Maksim Orlov, protagonist of the last WSK chapter in 2021.

For the "private" teams, Ward Racing will start its season in a fierce way as always with Maksimilian Popov, Artem Severiukhin, Mark Metsker, Alvar Siimesvaara, Vasil Michalidis and Menyhert Krozser.

All eyes are on some names in search of confirmation compared to last season with Dmitry Matveev (Koski Motorsport), Alfie Slater, following in his brother Freddie's footsteps in RFM, Tomass Stolcermanis (Energy Corse) and Gerasim Skulanov who has switched to the Birel Art supply as Lennox Racing.