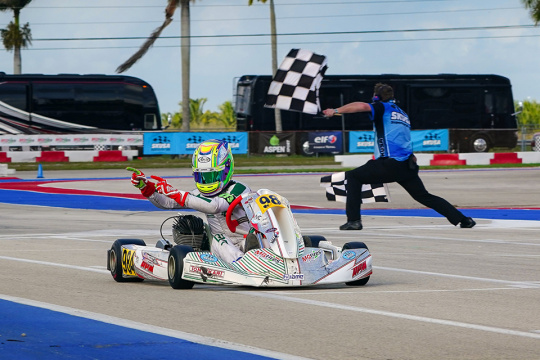 Author: Vroomkart International
With observations to improve Video Marshaling gathered, SKUSA's top management reintroduces rules on pushback bumpers, while working on ad hoc solutions for all drivers.
After the year’s first race in Homestead, for which it was decided to suspend the rule that punishes bumper displacement, SKUSA carefully weighed all the pros and cons that emerged and after careful evaluation decided to restore the norm starting from the next SKUSA event, also in Homestead, on the weekend of February 13th.

“No matter how you slice it, we’re going to make some people unhappy,” Tom Kutscher, head of the Series, explains. “Some people absolutely hate the bumpers, while many people appreciate their use and effectiveness at policing rough driving. After carefully researching the driver conduct after January’s race in Homestead, we feel it imperative to reinstate them beginning in February.”

As explained to us in an interview that you will read in full in the next issue of Vroom Magazine, the SKUSA staff, which already relies on a video monitoring system of the races, will further improve the "video commissioners" system to give the necessary support to those competitors who have been penalized and who wish to appeal to the end of the race for the cancellation of a penalty that they believe they do not deserve. “It’s a work in progress,” Kutscher said. “It’s not lost on us there are occurrences where people initiate the pushback bumper without hitting anyone. And/or there are some dirty tricks in the cool-down lap or scales. It’s up to us to try and find efficient ways to police that with the investment we’ve made into technology. And rest assured, that is indeed the plan. However, as we hash that out and perfect it for NOLA (ProTour, beginning of April, ed.) we’ll be reverting back to the pushback bumpers.”