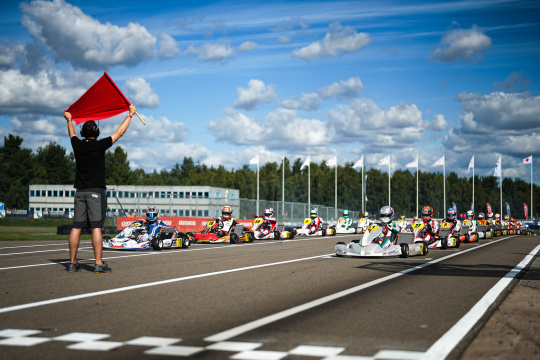 Author: Vroomkart International
With the first races just around the corner, there will be many changes in the new entry-list.
Many of the top teams have already made their line-ups official for the season, which is now just a step away from the real start. Unexpected changes and confirmations will outline the first rankings in preparation for the big events that await us.

As far as KZ and KZ2 are concerned, we still have to wait a few days for the complete general picture but, above all, the constructors have already made their battle horses known. Starting from the reigning World Champions of Tony Kart, Noah Milell will be the most awaited one, followed by the vice-champion Lorenzo Camplese and by Simo Puhakka. Also Juho Valtanen, already wearing Prevalle's colors since the last races of 2021, confirmed also the Luyets (Jean and Samuel), promotion for Alexander Gubenko. Awaiting the new entry Adrien Renaudin, ready to excel again after the past seasons constantly at the top of the category.
The "Red Army" Birel Art, will stage yet another high level line-up starting from KZ2 with the strong Italian presence led by Giuseppe Palomba, Alessio Piccini and Leonardo Marseglia, new entry Moritz Ebner, Oscar Targett and the Lithuanian Kajus Sisknelis. As far as KZ is concerned, on the other hand, an all attacking trident with the confirmation of Marijn Kremers and Riccardo Longhi and the passage from the Lennox Racing colors to those of the official team for Pedro Hiltbrand. Matteo Viganò, after the victory of the Skusa SuperNats 2021, will still be the standard bearer of Lennox Racing by CL16.

At CRG, among the biggest news of the past weeks, there is the arrival of Viktor Gustavsson after the years and the title of European Champion won with the colors of Leclerc. New entry all female with the arrival of Natalia Balbo in her first season as official driver.

Kart Republic, after having made official its line-up, will still line up Danilo Albanese and Paolo Ippolito, new arrival of the season.

On the French side, great comeback for Emilien Denner, ready to avenge the 2021 European Championship, just like his new partner Senna Van Walstijn.

Among the unexpected news, in the previous days, we have already confirmed the passage of the reigning European Champion, Giacomo Pollini, to the Birel Art supply with the Renda Motorsport management.

At Parolin, confirmations for now for Lorenzo Travisanutto and Francesco Celenta, waiting for the complete line-up.

OK/OKJ
The Direct Presence classes will officially start their season starting from the first WSK Super Master Series 2021 in Lonato, at least as far as the constructors are concerned. Among the already confirmed line-ups, Tony Kart will also have Luigi Coluccio on its side paired with the World Champion Taponen and Joe Turney.
The Birel Art front is fierce with the confirmation of Cristian Bertuca and the return of Karol Pasiewicz. Debuts for Harley Keeble, Yevan David, Kirill Kutskov, Gerasim Skulanov, Reno Francot and the young Zoe Florescu.

Also the European Junior Champion Freddie Slater moves to OKJ, ready to take to the track for the first time the Lando Norris chassis after the official collaboration with Ricky Flynn Motorsport. Among the novelties also the arrival (OKJ category) of Maciej Gladysz, fresh winner of the FIA Academy Trophy.

More debuts in Sodi Kart with Consani and Nathan in Junior, confirmed and starting in the next Champions Cup.

The colors of Fernando Alonso (DPK) are ready to the season of redemption, captained by the Italian X30 Junior Champion, Francesco Marenghi, ready to move to OK. In the Junior category, Bugunovic, Costa, Saleh and Monza.

Updates on the next category or team changes will follow, waiting for official announcements.