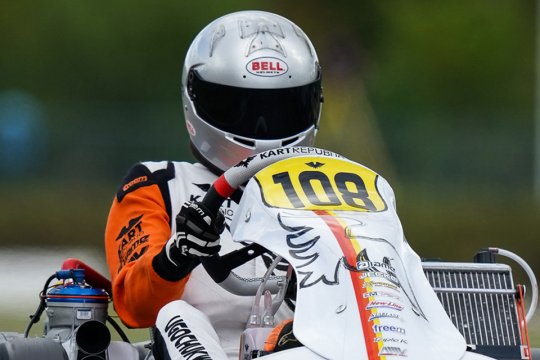 Author: Vroomkart International
For some, the parallel with Lewis Hamilton is all too easy. But times and ways are different, and because today Formula 1 is much more present in karting than in Lewis' time.
Romanticism aside, the agreement that links the very young and crystalline talent of Ugo Ugochukwu to McLaren is something that recalls the historic Dennis-Hamilton agreement only perhaps because of the vague resemblance between the Italian-American teenager and the young Lewis of the late 1990s. The story of Hamilton, as told by Lewis himself, began with a young boy, a child really, who at a gala presented himself to the big boys of British motorsport with a folder under his arm and his father explaining "who's who" to him.

The rest of the story is known and here we are talking about Ugo, therefore: Ugo Ugochukwu is an extremely talented kart driver of 2021 and McLaren a team that has little to do with the one of 20 years ago. That said, the youngster who crossed the ocean from New York a few years ago to become a professional has an interesting track record: OKJ Champion in 2020 after moving to Kart Republic and a World Championship, again last year in Portimao, lost probably due to adverse weather conditions so much so that the week before, in the Champions of the Future match, he had won without problems and in his own words, the possibility of winning that World Cup was more than concrete.

In his experience in OK in 2021, his last in karting, perhaps one would have expected more and some might even think that the "McLaren issue" and media interest have interfered. None of this: Ugo's talent is not in question and even at the World Championship in Campillos, however deserved by Taponen, Ugo was very fast right from the start of the final where he had gained the pole with great consistency throughout the weekend and in the heats. Then we all know how the finals can go, small technical problems can jeopardize a result that these kids, oriented as they are to jump in single-seaters, can hardly go back to chasing even just for two years in a row in the Top categories of karting.

Anyone who knows Ugo knows how cool and calculating he is on and off the track and how even in the most extreme situations he appears imperturbable. These are qualities that for a future professional driver - given the premises - are fundamental and that Ugochukwu will not fail to show also in cars, where the transition to F4 has already started on the track for him and where a season in the Carlin Team awaits him in the British F4, where the great adventure under the McLaren’s protective wing about to begin.