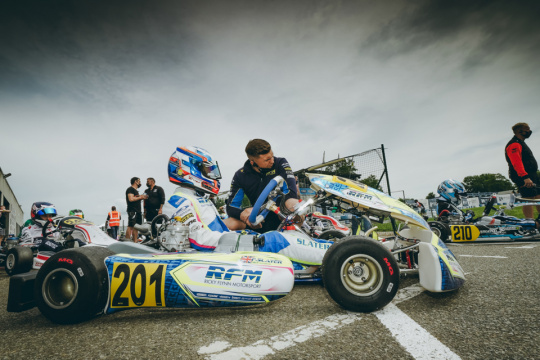 Author: Vroomkart International
"Sed lex dura lex – It is harsh, but it is the law". The rules, especially in a sport like ours, arise from the need to balance three key factors: Safety, Sportsmanship and Entertainment in strict order.
However, there are rules that, ever since their introduction, have been the subject of debate, such as the one that - with the aim of dissuading drivers from contact and thus containing their aggressiveness and accidents - punishes with a 5-second penalty those who arrive at the parc fermé, once they have crossed the finish line, with "non-compliance of the front spoiler" (as the text of the rule itself states, in Italy, but the meaning is the same everywhere): that is, with an alteration of the position of the spoiler, often (but not always) due to contact with other competitors.

Well, when this affects the result of a World Final and specifically a final in which the gap inflicted on the second (the excellent and deserving Nakamura, who stole nothing, let it be clear) had almost allowed Freddie Slater to win (Freddie missed the victory by a few tenths …) it is normal for the debate to re-ignite. All the more so if a couple of months away, the Rotax World Final was also conditioned by the application of the regulations in very similar terms, depriving the very fast Tereza Babickova of a historic victory, and like it or not the rules must be applied.

For Slater, it would have been his second World Championship in a row, just as for Hamilton, it would have been his eighth in the exciting Abu Dhabi finale: a great way to make history. From Karting to Formula 1, the rules often produce unexpected results that some, legitimately, can dispute or simply curse. But they are the rules, and the reality of the races and the experience gained through them can help those involved to adjust their focus and better calibrate the rules and their application. Resources will be needed, not only in the legislative context but also on the track, for example by adding commissioners and with greater vigilance on what happens in the race, because the Entertainment, the Spectacle, that fans so enjoy is born and develops from the essential balance between Safety and Sportiness, while the drivers, on the track, do their best to win.