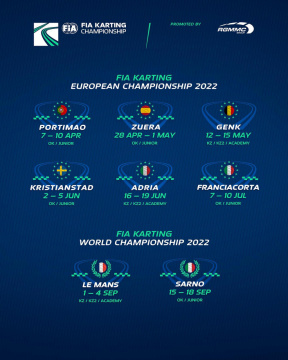 Author: Vroomkart International
The 2021 season has given a new face to FIA Karting competitions with the generation change in all categories. Expectations are high for the FIA Prize Giving in Paris on 18 December 2021.
The 2021 FIA Karting season has offered a lot of ideas, and it is now over and almost archived with the last act in a few weeks in Paris, when all the Champions of the four categories (OK, OKJ, KZ and KZ2) will be included in the golden roll of karting that counts.

After the Grand Gala on 18th December, it will be time to think immediately about the next season, which is expected to be eagerly awaited and above all ready to put on a show, also thanks to the new homologations which will be in force from 2022 after having postponed the big step because of the Pandemic.

The FIA has therefore already made official the scenarios where all the karting aces will write the new course between welcome returns and novelties such as the decisive stage of the European OK and OKJ on the Italian track of Franciacorta, the third appointment "made in Italy" on the calendar. Here are the dates and circuits chosen.

At the last World Motorsport Council, the FIA Karting then officially announced the suppliers for 2022, confirming the choices made. No news yet on the choice of tyres, to be unveiled in the coming weeks.