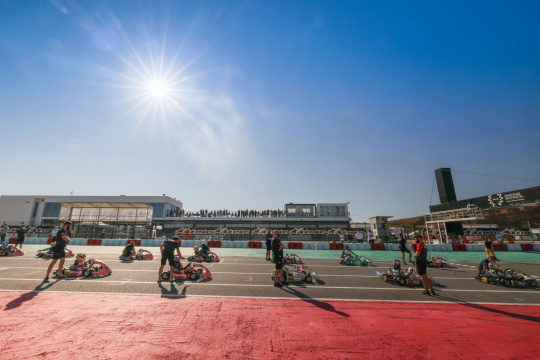 Press Release by: Iame
For the second year running, the I-Games targeted to set itself as the best way to close the international IAME X30 season, and so it did!
The scenery was set at the Kartódromo Internacional do Algarve which is not only known for the great layout and infrastructure of the track, but also a great touristic location by the beach with great weather, even at this time of the year!
The attendance stayed at equally high levels as the rest of the year in all three categories, proving the stability and strength of the RGMMC-organized IAME series!
All categories were highly contested until the very last meter before the finish line, with the final crowns going to Roman Kamyab, Andy Ratel and Callum Bradshaw.

X30 Mini
From the very first moment Roman Kamyab (Fusion Motorsport) showed his intentions setting the fastest lap in qualifying, ahead of Noah Baglin (Oliver Rowland Motorsport) and Jesse Phillips (Fusion Motorsport)!
Kamyab continued in strong fashion on Saturday, finishing on top after the three qualifying heats, this time ahead of his two teammates Ben Smith (Fusion Motorsport) and Kit Belofsky (Fusion Motorsport)!
Noah Baglin came back to strength in the prefinal, taking that win to set the ground for a battle for a win in the final, edging Kamyab just by a fraction at the finish line, while Rodrigo Seabra (Oliver Rowland Motorsport) made a fantastic effort to come back 13 positions to finish 3rd and secure a second row start for the final!
The final was a tightly contested race, where Kamyab would reclaim the lead but had to defend heavily from his two teammates, claiming the win with Ben Smith in second and Jesse Phillips in third almost touch each other over the finish line!

X30 Junior
While all eyes were probably on the recently crowned Euro-series champion Kanato Le (Strawberry Racing), it was Andy Ratel (KBK Competition) who got the pole position putting in a last-second fastest lap. In second place it was Thomas Strauven (Strawberry Racing) while Kanato Le finished in third!
Saturday’s qualifying heats finished in a very close classification, where Thomas Strauven equalled on points with Kanato Le and Vinnie Phillips (Strawberry Racing) so the positions had to be decided on the details!
Some hard racing in the prefinal saw Thomas Strauven drop back two places, finishing 3rd, and Kanato Le four, finishing 6th, to the benefit of Vinnie Phillips and Andy Ratel who secured their front row start for the final.
After his prefinal form, Andy Ratel seemed to have found again his early form, getting ahead after the initial battles for the top and clinching the win! Thomas Strauven eventually finished second, while third spot went to Eric Gene (MOL Racing) who made a fantastic race to overtake early favorites Phillips and Le on the way to the podium!

X30 Senior
The senior category saw several of the protagonists of the Euro Series contest for the top. Out of them it was Sean Butcher (KR Sport) who put on a great lap to claim the top spot ahead of Danny Carenini (KIB Racing/Parolin Portugal) and Thomas Fleming (Dan Holland Racing).
There were many outstanding results in the heats, from Aaron Walker (Strawberry Racing), Callum Bradshaw (Strawberry Racing), Sean Butcher, Mark Kimber (Strawberry Racing), Tereza Bábíčková (Tepz Racing Team), and Lewis Mackie (Fusion Motorsport), but in the end it was Callum Bradshaw who took the top spot 7 places up from his qualifying, ahead of teammates Aaron Walker 15 places up from qualifying and Mark Kimber 9 places up!

Bradshaw continued in strong form in the prefinal taking the win, but not without some surprise battles with Khali Atkins (Croc Promotion) who eventually finished second. Mark Kimber maintained his third place.
It could have been anyone’s guess who would win the final, after a long battle that saw the lead changing several times, between Bradshaw, Walker, as well as Eloi Gonzalez who came to the top all the way from his 8th place start. The group was also challenged by Connor Jupp (Fusion Motorsport), Santiago Vallve (MDC Racing) and Maximus Mayer (Fusion Motorsport). Eventually the win on track went to Eloi Gonzalez, however a front-bumper penalty handed the win to Callum Bradshaw, second to Connor Jupp and third to Aaron Walker!

As always, RGMMC is pushing its media exposure with increased presence in the social media space added to the already industry-leading live timing and streaming coverage.
Results, photo and video highlights and all information updates were posted on facebook and Instagram, in addition to interviews and highlights that were made available on the RGMMC Productions Youtube channel.