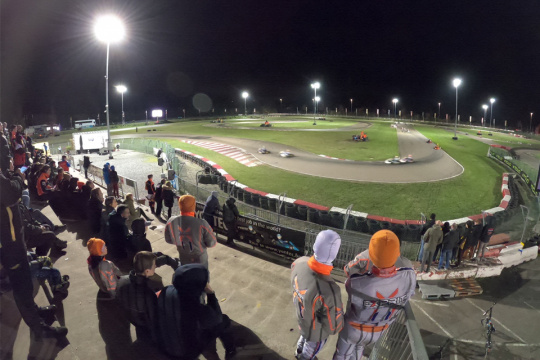 Author: Vroomkart International
Rotax MAX Challenge Euro Golden Trophy Saturday, November 6 – Karting Genk, Belgium
The Rotax MAX Challenge Euro Golden Trophy has provided an excellent opportunity for just over 200 drivers to compete in the popular international race event in Belgium, as the 2021 season draws to an end. With the winter closing in, the 1,360 metre Karting Genk circuit lit up as the sun went down Friday, for the official timed practice sessions to decide the race pole-sitters. And true to form in Limburg , the weather changed late in the day to bring some light showers just in time for the qualifying at the ‘Home of Champions’, which was repeated as the floodlights came on again Saturday afternoon for the third round of the heats. This kept things interesting for the track action in the battle for positions and points in all six of the Rotax racing categories.

MICRO MAX
Kenzo Craigie (GBR) from the Sodi Vitesse team secured pole position in qualifying in the field of 27 drivers. However, it was the young Dutchman Boaz Maximov running on a Birel in his preparation for the RMC Grand Finals with Bouvin Power who took victory in two of the three heats Saturday to be starting on P1 in Sunday’s pre-final. Germany’s Noah Janssen was the winner in the opening heat to be starting on the front row as well, while another of the Sodi Academy drivers Albert Friend (GBR) ranked P3 after the heats and Luka Scelles (FRA) was P4 ahead of Craigie.

MINI MAX
It was Mees Houben (NED) who set the track alight in Friday’s timed practice to post quickest lap by just over half a second in Rotax Mini MAX, but the Parolin driver was unable to keep pole position for the pre-final. Instead, local youngster Mateja Radenkovic (BEL) having won two heats to lead from Houben and Toms Strele (LAT) sitting on equal points. Ranking P4 and 5, was Lawrence Herbots (BEL) and France’s Romeo Roussel who took the win in the last heat with the pair also tied on points.

JUNIOR MAX
Juniors lined up with 45 entries contesting the Euro Gold Trophy title where another Belgian Thomas Strauven set the pace in Friday’s qualifying and the Strawberry Racing driver took advantage of the prime position to keep his place for the first of the finals on Sunday. Fastest in group 2 Friday was SP Motorsport’s Jayden Thien (NED), who went on to take the flag as the only winner of two heats. Strauven took victory in one race, as did Bruno Mulders (NED) ranking P2 overall and Vinnie Philipps (GBR) to be P3. The newly crowned Rotax Mini MAX British champion Ethan Jeff-Hall led another race winner Mikkel Pederson (DEN) who rounded out the top 5 in the points following the heats.

SENIOR MAX
Rhys Hunter (GBR) from team DHR is looking confident to be a favourite for the victory here in Belgium, having clocked the fastest lap in qualifying and maintained his number 1 grid position for Sunday’s pre-final, after taking the win in two of the heats, only to be beaten by his brother Kai in the other, also with two wins. The pace-setter from group 2 in the timed practice, Zsombor Kovacs (HUN), beat local GKS hotshot Dylan Lahaye to the best time in the qualifying by a mere 0.002 seconds, before the Belgian was handed a bumper penalty thereby promoting another well-known fellow countryman Sebastian Bailly up the order. In front of him was another strong contender also making a special return appearance in the Rotax event, Clayton Ravenscroft (GBR), who held onto P3 after the racing, actually winning the last heat under lights. Luca Larini (BEL) was consistent taking 2nd in all three of the races to rank P2 behind Rhys Hunter, while French champ Nicolas Picot ranks P4 ahead of Kovacs for the pre-final order. Another former Euro Junior front-runner Mads Riis (DEN) was the winner of the remaining heat. The times were incredibly close and the field of 59 is shaping up to be a fantastic finals day.

DD2
Pole was claimed by Patriks Noels Locmelis (LAT) of BirelART Baltics in the second group of the 2-speed gearbox class and the 46Team driver Kacper Bielecki from Poland put his Haase kart at the head of the leaderboard in the first group, claiming P2 behind the Latvian in the timed practice. In the racing, the main order only changed for the poleman, replaced by newly-crowned 2021 BNL champion Glenn Van Parijs (BEL) riding on-board the BirelART chassis preparing for his Grand Finals Bahrain campaign next month. He took a win and two 2nd places, while Bielecki ranked P2 and third-placed Xander Przybylak in the #401 kart each finished Saturday with a heat victory, while Mika Metz (GER) and Lasse Andreasen (DEN) made up the first 5 places on the grid for the pre-final Sunday.

DD2 MASTERS
The fastest time was set by Daems Racing Team’s James Beacroft (GBR) in the over 32-year category, fractionally ahead of Cyprus-based Denis Valantis Thum. Although in the racing the lead changed; it was the very experienced French racer and team Manager Morgan Riche who dominated the heats taking three victories to secure pole for Sunday’s pre-final. Finishing each race in P2 was RMC Euro Trophy front-runner Alessandro Glauser (SUI) looking good for the challenge, then came Sebastian Rumpelhardt (GER) ahead of Beacroft and Thum in the overall points ranking after the heats. Sunday’s racing is guaranteed to turn on some exciting competition at the Karting Genk venue, with six tickets to the RMCGF 2021 in Bahrain up for grabs in addition to the titles, along with a prize pool of €30,000 in event entry bonuses for next season’s RMC Euro Trophy to the podium place-getters.

To follow all the track action online Sunday visit the official RMCET website for all the links - www.rotaxmaxchallenge-eurotrophy.com