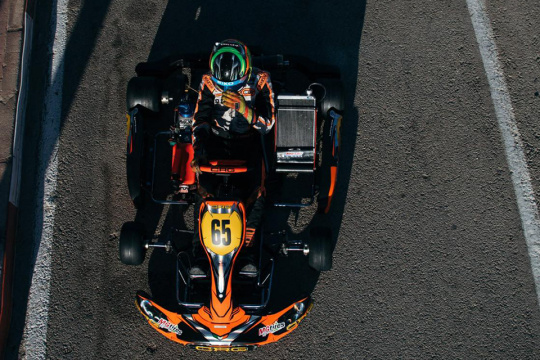 Author: Vroomkart International
The World Championship has started on the Spanish track of Campillos. First pole positions for OK and OKJ with David Walther and Gabriel Gomez masters on Friday.
After averting the threat of rain (at least for today), the World Championship officially came to life at the end of the numerous free practice sessions. The official qualifying gave a hint of what could be the values on the field, mixing protagonists with outsiders ready to be decisive for the final of the Championship.

OKJ - David Walther in front of everyone
The Danish driver was unrivalled in his qualifying session, setting a time of 1.01.687, enough to take home the world pole position and above all the possibility to fight in tomorrow's heats. The reigning World Champion Freddie Slater was immediately second in the overall standings (1.01.698) and leader of Group B, while Maksimilian Popov set the third fastest time in Group C. The fight was immediately tight between Slater and Matheus Ferreira, with the Brazilian sticking to the group of the first ones and leader in group D, the last two pole positions were assigned to Dmitry Matveev, for the joy of Koski Motorsport after Walther, and James Egozi first of the Tony Kart drivers respectively for groups E and F.

OK - Gabriel Gomez and CRG, it is pole
The Brazilian driver of CRG was very fast since this morning's free practice and showed good performances. The same performances he was able to repeat in his qualifying session, stopping the clock at 59.391, a stratospheric time which put the green-gold driver in the first position. Oscar Pedersen took another surprise second in 59.401, a time he was able to improve on and stay ahead of the favourites. The last three poles were awarded to Nikola Tsolov, still in great form, Ugo Ugochukwu and Rafael Camara in groups C, D and E.