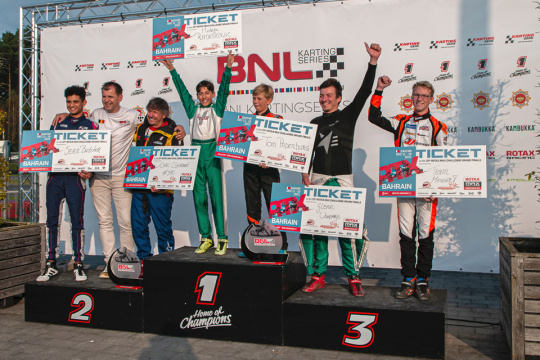 Author: Vroomkart International
After a six-month long journey, the final round of the 2021 BNL Karting Series season took place under fantastic sunshine in the first weekend of October, where both titles and Rotax MAX Challenge Grand Finals tickets were given away at the “Home of Champions,” Karting Genk in Belgium.
With almost 90 drivers from 12 nations would head to the 1,360-metre circuit in Limburg, to battle it out for one final time, ahead of a lengthy winter break.

Micro Max-Maximov wins the weekend, but Papenburg takes the title by a whisker
It was a weekend of twists and turns for the youngest class in the Rotax family, with a new weekend winner and new champion being crowned.
Boaz Maximov would win the weekend result, winning three of the four races, after a clash between the Dutch driver and countryman Tom Papenburg in the first race, where the latter had come into the weekend leading the standings.
Even with a post-qualifying exclusion, Belgium’s Yenthe Moonen would storm through the field in the first race to win the first race, it would help the #10 to take the runner-up spot for the weekend. Papenburg would fight back to finish in third place, followed by both Luca Stordeur and Vic Van Campenhout.
But a mere four points, Papenburg would secure the overall title, ahead of Maximov, and would secure his place at the Grand Finals for Team Netherlands, with Moonen, Van Campenhout and Stig De Raedemaeker completing the championship podium.

Mini MAX-Radenkovic unphased and dominates proceedings
Belgium’s Mateja Radenkovic would be very much unchallenged all weekend long at Genk, as the Bouvin Power driver scored a perfect weekend, taking pole position on both days and winning all four races amidst the fantastic sunshine. Thijs Stevens would take the runner-up spot by just three points ahead of Mees Houben, with the GKS Lemmens Power driver having to drive with a minor hand injury.
Lawrence Herbots would be in the mix for the top three that weekend, consistently running in the top three, rounding out his weekend with a third-place finish, putting him fourth on the podium ahead of Mats Van Rooijen.
Radenkovic would take the title from Houben by 65 points with a near perfect season in his pocket and secure his Grand Finals place with Team Belgium. Stevens would take third in the overall standings, 20 behind Houben, followed by Herbots and Van Rooijen.

Junior Rotax-Rillaerts gets a scare but picks up another title
JJ Racing’s Kaï Rillaerts would get the surprise of his life in the first day of racing at the season finale, having been pipped to the finish in the first race on Saturday by 0.040 seconds by young Dutchman Tommie Van Der Struijs, who would go on to do the double on the first day.
But Rillaerts would be back on top form on the final day of the season, winning both races comfortably en route to picking up another championship, his third of the year, and with it also came the weekend result.
Van Der Struijs would finish four points off a maiden Junior weekend win in the BNL, ahead of Germnay’s Farin Megger, who scored 58 points over the course of the weekend. The recently crowned RMC Germany champion would take a third and second place result on Sunday to secure the final spot on the weekend rostrum.
RIllaerts’ victory over team mate Megger for the title was a considerable 84-point margin between the pair, whilst the Netherlands’ Matthijs Terlouw run to the runner-up spot was dealt a severe blow in the last race of the season, where a first-lap incident saw him end up finish out of the points. Senior Rotax: Butcher untouchable and successfully defends his crown!
KR-Sport’s Sean Butcher would also be a driver that could not be denied a second successive title, even with the fact that Bouvin Power’s Luca Leistra was unable to participate in the final race weekend of the season.
The London-based Australian, who runs under a British licence, would be a tour de force at the circuit, taking pole position on both days and winning all four races. He thereby secured a second title in a row in the same style that Joe Turney did back in 2018 and has booked his place at the Grand Finals with Team UK in Bahrain.
The closest challenger to him was KR-Sport team mate Lachlan Robinson, with the UAE  driver being able to secure three second place finishes and a fourth on his way to taking the runner-up spot in the overall standings.
The Netherlands’s Max Stemerdink would try his level best to secure the Senior Rotax title, but would be denied the chance to do so, as countryman Sam Bergsteijn would hit the final step of the weekend rostrum, one point ahead of two-time Senior Rotax champion Dylan Lahaye. Stemerdink would finish 29 points behind Robinson in the championship standings.

DD2-Drama at an all-time high, but Van Parijs was not denied
The final race weekend in the DD2 class didn’t quietly into the night, but it did provide an explosive way to round off the season in the most unpredictable way possible. It was Estonia’s Ragnar Veerus that would end up winning the weekend results, becoming the first of two new race winners in DD2 this year, winning the Final on Day 1, with GKS Lemmens Power’s Mick Nolten winning both races on the Sunday.
Nolten would hit the runner-up step on the weekend podium, ahead of Latvia’s Patriks Noels Locmelis, who took two third place finishes, a second and a fourth.
Two significant incidents between Glenn Van Parijs and former two-time champion Xander Przybylak saw the latter excluded from the weekend result, with the former denied of a total of eight race wins over the course of the season. But Van Parijs would win the title by 55 points ahead of Nolten, with Veerus’ efforts over the course of the weekend putting him on the final step of the championship podium.

DD2 Masters-Champion falters at the final hurdle, as Cleirbaut goes to Bahrain!
With two different race winners over the course of the final weekend, the battle for the title for DD2 Masters was decided on the last race of the season. Bruno Dos Santos was able to take the victory for the weekend, having picked up a win in both finals, with Carl Cleirbaut second ahead of the returning Christophe Adams.
Cleirbaut would also share the victories with Dos Santos, along with a second and a third place finish in the other races to keep him in close conention with defending champion Rudy Champion. But it all came to one incident involving Champion and DD2 driver Jordy Koullen in the final race of the weekend, where a Turn 10 incident saw the French driver promptly excluded and costing him a title defence in the process.
Cleirbaut will head to the Grand Finals for Team Belgium, having raced for them back in 2019 at Sarno, winning the championship title as he did that year by just six points from Champion, who already booked his place at the Rotax MAX Challenge International Trophy in late July, whilst Dos Santos would finish third overall, 64 points behind countryman Champion.
Now with the 2021 season completed, it has been a welcome return to a full championship with no interruptions in the eye of series organiser Dave Ritzen: “It has been great to be able to have an uninterrupted calendar after last season, where the pandemic made things so unpredictable.
“We had great racing all the way through the season, and with the weather on our side at the final round here in Genk, it made for a great meeting for everyone involved. We know that it is a long winter break before the 2022 season starts, but now we can all enjoy the Rotax Grand Finals in Bahrain!”
Soon after the 2021 season was completed at Karting Genk, the new calendar for their 2022 campaign has been revealed, with the dates and locations as follows: BNL Kick-Off – Karting Genk – 19th & 20th March Round 1 – Karting Genk – 16th & 17th April Round 2 – Karting Des Fagnes, Mariembourg – 2nd & 3rd July Round 3 – Karting Genk – 1st & 2nd October. With six drivers crowned champions and six tickets to the Rotax Grand Finals given away, the ledger is reset for 2022, with drivers now looking to improve over the winter time, getting themselves ready for the next challenge.