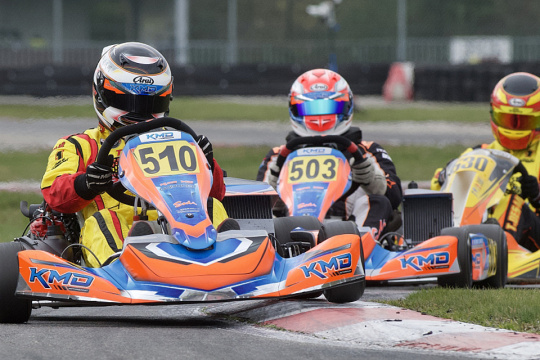 Author: Vroomkart International
After three months since the last competitive race weekend of the BNL Karting Series in early July in Mariembourg, the third and exciting final round of the 2021 campaign is about to decide this year’s champions.
With almost 90 drivers from 12 different nations, spread over six classes, the “Home of Champions,” Karting Genk, will again provide a welcome and familiar background to those that have kept with the rollercoaster journey.

In Micro MAX, Tom Papenburg took three wins out of four at Karting Des Fagnes in early July to cement a 17-point advantage going into the season finale in Genk, with fellow Dutch driver Boaz Maximov in second. Lorenz De Cock completes the top three in the standings, eight points off second.

Mini MAX has Bouvin Power’s Mateja Radenkovic leading the way, after a near-perfect score last time out, with Mees Houben eighteen points adrift, but he also scored a victory in the Pre-Final on day two at Mariembourg. The GKS Lemmens Power driver is ahead of both outgoing champion Max Sadurski and Lawrence Herbots, who are tied on points.

A healthy lead of 64 points for Belgium’s Kaï Rillaerts sees him command proceedings in Junior Rotax, as the Euro Trophy champion and Rotax MAX Challenge International Trophy heads into the final round of the season, ahead of nearest rival, the Netherlands’ Matthijs Terlouw. Newly-crowned Rotax MAX Challenge Germany champion, Farin Megger, completes the top three with 100 points to his name, followed by JJ Racing’s Joep Breedveld.

Senior Rotax could have a defending or a new champion in 2021, but there has been a development with points leader Luca Leistra not able to attend the finale. Last year’s champion Sean Butcher is currently second in the standings, but his KR-Sport team mate, the UAE’s Lachlan Robinson, is only one point adrift. Max Stemerdink now has a chance to factor into the title picture, as he is a mere six points further back in fourth.

Glenn Van Parijs has been the class of the DD2 field this season, having picked up five race wins this year over the first two rounds, which puts him a full 83 points ahead of Dutchman Mick Nolten, which could very well see the former secure the title in the first race if he finishes with a 100-point lead.

It is a four-way battle for the runner-up spot in the championship between Nolten, former two-time champion Xander Przybylak, Estonia’s Ragnar Veerus and Belgium’s Jarne Geussens, who are covered by just 17 points.

France’s Rudy Champion is close to winning back-to-back titles in the DD2 Masters class, but has a slender 29-point lead over 2019 champion Carl Cleirbaut, which means the title may not be a straightforward formality. Jonathan Wemaux has stayed in contention, having strung together some welcome consistency over the course of the first two rounds, as he trails Champion by 68 points.
The final 20 races of the 2021 BNl Karting Series season brings it all to a close in the Limburg region, with champions set to be crowned, along with a lucky few receiving the prestigious chance to compete at the 2021 Rotax MAX Challenge Grand Finals in Bahrain this December!

All races will be live-streamed via Camp Company GmbH, direct from the circuit itself this weekend.