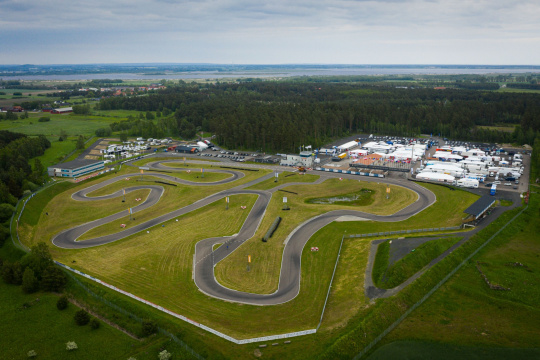 Author: Vroomkart International
The wait is over, the most important stage of the season is about to repopulate with all the contenders for the title of World Champion.
After a few years, the Swedish track of Kristianstad (Asum Ring) returns to host a KZ and KZ2 World Championship. An appointment which is worth a season and one's name inscribed forever in the roll of honour of the greatest. Less long break than usual for the European Championship, just concluded on the circuit of Adria with the all-Italian victories of Riccardo Longhi and Giacomo Pollini.

The feeling before getting into the heart of the new edition of the FIA Karting World Championship is that of a completely new dimension where all values will be "reset" to put everyone back into question. The Swedish World Championship will also sweep away the extra-sporting events experienced one year ago at Lonato, which for a few weeks had polluted the sporting performances and the historical victories of Iglesias and Cunati. The Asum Ring has repeatedly accustomed to a unique spectacle inside and outside the race context, similar ambitions and hopes also for this 2021.

In KZ it will once again be a hunt for Birel Art men, inevitably to be beaten after Riccardo Longhi's triumph in the European Championship, won with pain but never giving up. Longhi will aim to do the encore and also take the world scepter, improving the second position of 2019 behind his teammate Marijn Kremers, another great pretender after a troubled European and the second place last year. Eyes also on Emilien Denner as Kart Republic for the occasion and fiercer than ever to avenge the withdrawal and broken dreams of Adria. Ambitions of revenge shared by Matteo Viganò (Lennox Racing) and desire to impress again for Pedro Hiltbrand and Viktor Gustavsson hunting on the home track and among the absolute favorites.
After Paolo Ippolito's exploit, it is fair to expect great things from the CRG army, not only with the Italian driver, but above all with the reigning World Champion Jeremy Iglesias, who is increasingly growing in his first "All Blacks" season. Many luxury outsiders such as Francesco Celenta (Parolin), Simo Puhakka (Tony Kart) and Noah Milell (Tony Kart) also in front of their fans, Alex Irlando (CRG) and Stan Pex (SP Motorsport). Not to be underestimated are the interesting returns of Bas Lammers (Kart Republic) and Anthony Abbasse (Sodi), both very motivated.

More than 100 pretenders to the success in the International Super Cup KZ2, led by the new European Champion Giacomo Pollini. The NGM Motorsport driver will be on track with the number #101, dreaming of an encore that would crown a season with CRG colours of even more value. Pollini will try to repeat what he did in Adria, where his consistency and lack of mistakes deservedly brought him to enjoy the European title. A task that Senna Van Walstijn (CPB) will want to make difficult right from the start, especially after the defeat in Adria and the great potential he showed.
Scrolling down the list of favourites, the fresh winner of the Italian ACI Championship, Giuseppe Palomba (Birel Art) will start from the awareness of having been the fastest on the track in the last appointment together with Danilo Albanese (Kart Republic), both widely in control of the first and second position without the close contact on the first lap. Hunting for confirmations Leonardo Marseglia (Kart Republic) also among the best but betrayed by a technical problem in the heats of Adria and out of the games, sweet memories and license to dream big for Lorenzo Travisanutto (Parolin) already World Champion at Asum Ring in OK and for the first time on the podium of KZ2 a few weeks ago.

Will it still be tyre chaos? Teams and drivers expressed their discontent during the European Championship with the sole supplier of 2021 tyres. Important accusations especially in light of Friday's qualifying and in some cases Saturday and Sunday's heats. Hot tempers not to be underestimated for the fate of the weekend, which promises to be unique as always.

Official start on Friday 3 September with the last free practice and the first official qualifying, heats between Saturday 4 and Sunday 5 September before the finals that will award the new titles.
FULL GUIDE