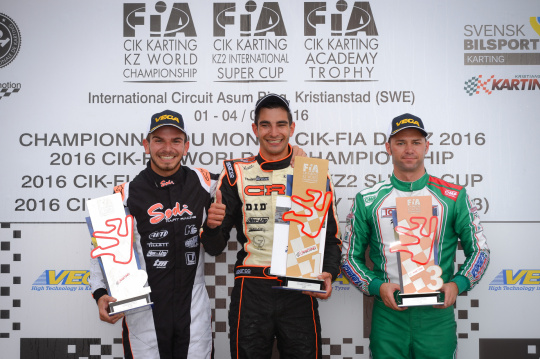 Author: Vroomkart International
In a few weeks the FIA Karting Circus will open its doors at the Kristianstad circuit for a new edition of the World Championship. In 2016 the last presence of the gearbox class in Sweden.
A distance of five years between one World Championship and the next, a period of time to be considered abysmal in terms of values and different sporting eras compared, but not so different in terms of protagonists and probable great returns.

Comparisons in motorsport are often impossible to make precisely because of the different approach of a sport that in its nature continues to accelerate and move fast towards new scenarios. However, there are some similarities between Kristianstad 2016 and what will be Kristianstad 2021, especially in the light of the results just consolidated since the end of the European Championship.

KZ
From a sporting point of view, the 2016 World KZ Championship saw the great triumph of Paolo De Conto. An important pearl in the career of the symbolic CRG face in the golden age of the assaults on the most prestigious titles of international karting. De Conto's victory came at the end of a weekend of great battle and, above all, after the 25 laps of fire together with Anthony Abbasse, his great rival for the second year in a row. The podium was completed by yet another heavy name such as Marco Ardigo (Tony Kart), the initial leader of the race.
Looking only at the starting grid of finalists, there are many names that will make their return to the curves of Kristianstad in 2021, starting with Abbasse. The Frenchman will have the satisfaction of being there again five years later, this time as a fan (at least that's what he said on the eve of the race), still wearing Sodi Kart colours and with the same undeniable desire to excel. Scrolling down the list in fourth and fifth place in 2016 came Bas Lammers (Sodi) and Simo Puhakka (CRG), both firmly at the wheel again this season with Lammers fresh from two consecutive podiums in the World Championship and now a well-known face for Kart Republic, Simo Puhakka will instead take the reins of Tony Kart.
Colours and "job" quite different for Jeremy Iglesias, seventh five years ago and now CRG's bearer and above all reigning World Champion after the fairytale of 2020. The Pex brothers were also present with Stan ahead of Jorrit, Lorenzo Camplese and Jorge Pescador, even if in KZ2. It is also worth mentioning Jordon Lennox-Lamb, who went from driver to Team Manager, with high hopes of a good result.

KZ2
The International Super Cup KZ2 completed a great end of season for CRG, also thanks to Pedro Hiltbrand's triumph as absolute dominator and to the open poker with the second place of Fabian Federer (SRP Racing), Benjamin Tormqvist (CRG Holland) and Felice Tiene (CRG). Hiltbrand and Federer will obviously be on track also in 2021, but in KZ, with the Spaniard now wearing Charles Leclerc by Lennox Racing colours and in second place in the last race at Adria, Federer, still with SRP, will have to come back to the top of the general classification.
Fifth place in 2016 for a Matteo Viganò totally changed nowadays, not only for the passage in KZ and from Comer at that time to Lennox Racing but especially for the great level of awareness reached and an International Super Cup KZ2 more won with Tony Kart. Same for the then tenth classified Marijn Kremers, still with Birel Art but after five years among the symbolic faces of the Red Army of Lissone and driver to beat after a historic World title in 2019 and a European Championship won in 2020. Steps in KZ also for Francesco Celenta and Paolo Ippolito (fresh third at the European Championship) both out of the top ten that year and pretenders to the title in a few weeks.

In addition to the names present five seasons later, the two Kristianstad races could unveil yet another thread in case of a CRG victory, which returned to win a KZ2 European Championship with Giacomo Pollini (NGM Motorsport) a few weeks ago and a KZ stage victory in the same race with Paolo Ippolito. Interesting clues that will have to be compared with the new regimes present at the moment, such as the predominance and the winning streak of Birel Art chassis, the inclusion of Kart Republic in the fight and the usual unknowns that will make the World Championship of Kristianstad unique again.