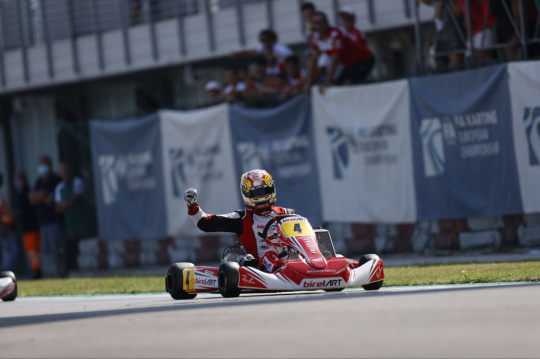 Author: Vroomkart International
An uncertain and spectacular final the one just staged on the circuit of Adria. Giacomo Pollini (KZ2) and Riccardo Longhi (KZ) are the new European Champions. 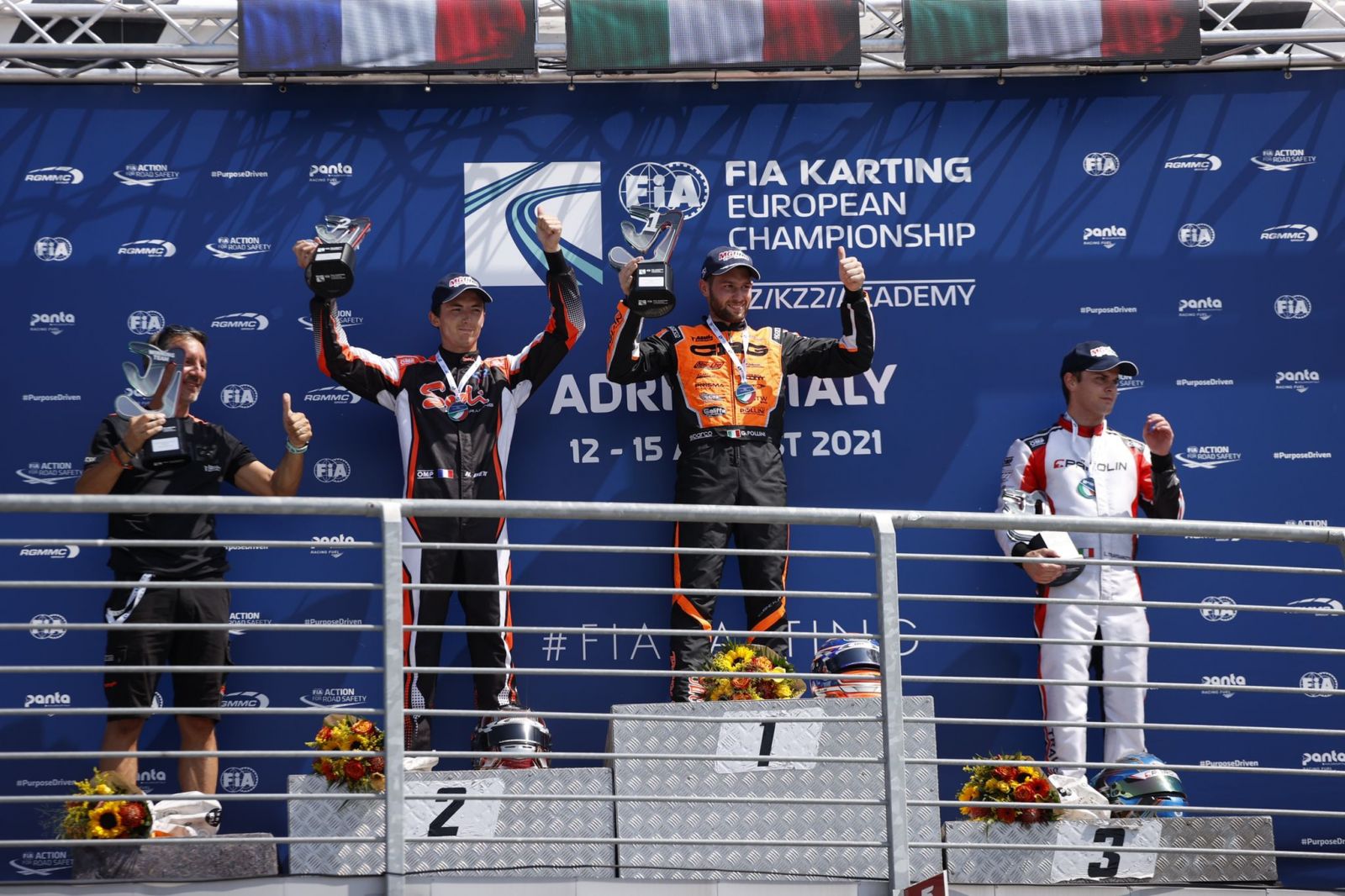 KZ2 - Pollini, Europe is yours
KZ2 opened the dances of the last day of races valid for the European Championship. A heart-stopping final which had its first twist of fate already during the second lap. Giuseppe Palomba (Birel Art) and Danilo Albanese (KR) were in fact protagonists of the fatal contact for the first place with Albanese out in the second sector and Palomba forced to lose positions. So it was time for the fight for the overall classification between Giacomo Pollini (NGM Motorsport) and Senna Van Walstijn (CPB), both spectators of the accident. Once in the lead of the race, the Italian driver gave his best to replicate the great performances shown in the heats (three wins out of five) and the dominant race pace, managing to dig a second and a half of margin in a few laps. With Giacomo Pollini firmly in the lead, it was Paavo Tonteri's (CRG) turn to "defend" his brand mate from the return of Senna Van Walstijn, who was lagging behind his rival but still in a dangerous third position for the classification. Twenty-four laps of suffering ended with the attack of the Dutchman on the second position, a manoeuvre perhaps reckless that, in fact, has put an end to the hopes Sodi Kart with the long Van Walstijn from second to fifth place. Giacomo Pollini therefore crossed the finish line alone with a three-second advantage and the title of new European Champion for the joy of the three NGM Motorsport members, Nico Biasuzzi, Ermanno Feltrin and Moreno Fortuni. The team from Veneto had already been very close to winning the European title in 2018 by finishing second. Continental title branded again Galiffa Kart and CRG, back on the roof of Europe.
Second position in the race for Hubert Petit (Sodi), third after ten positions recovered Lorenzo Travisanutto (Parolin), close the top five Carbonnel (CPB) and Van Walstijn, eighth Palomba. 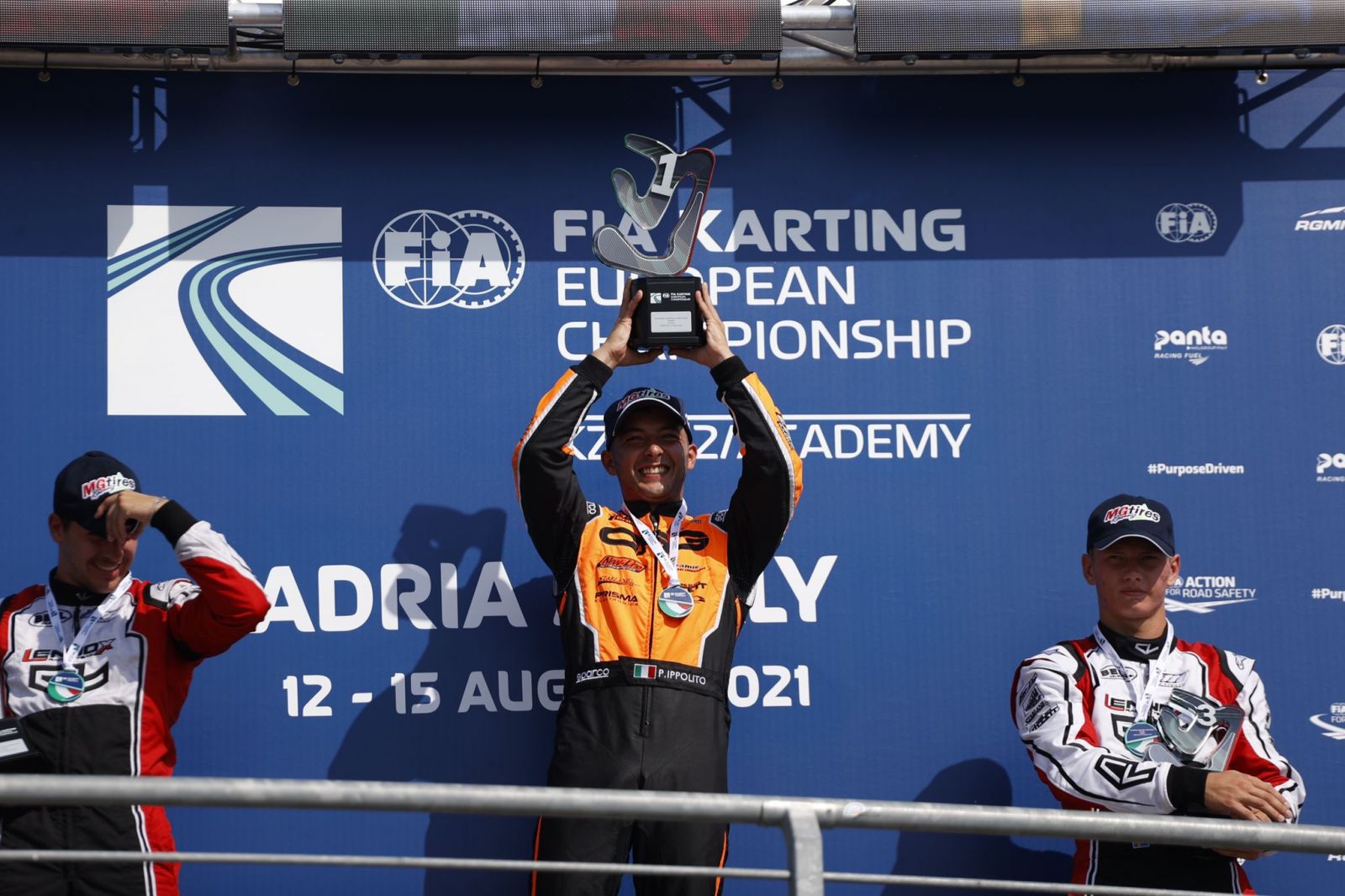 KZ - Ippolito wins the race, Longhi weekend as (European) Champion
High tension final also for the long-awaited KZ showdown. An all-Italian start with Matteo Viganò (Lennox Racing) and Paolo Ippolito (CRG) on the first row. When the lights went off, Ippolito took the lead after the uncertain start of Viganò, who was then overtaken by his mates Gustavsson and Hiltbrand (Lennox Racing). Just the Spanish driver, with the sensational second position gained was the main pretender to the title of European Champion for the first part of the race, however, dominated without problems by a Paolo Ippolito in splendid form.
As per the script of the entire weekend of Adria, all attention behind the first for the clash at high altitude between Riccardo Longhi (Birel Art) and Emilien Denner (Intrepid). A cold war between the two, who came very close to each other already from the fifth step until the maneuver of Longhi at the end of the long study phase. Everything happens in the last seven laps, the Birel Art driver braking to the limit at the last hairpin of the second sector, useful to put the wheels in front of Denner. An even more tragic ending for the Frenchman on the next lap, out of the race due to a race contact while he was in the fight and recovery phases against his rival.
Under the chequered flag it was a great party for CRG, with the solo success of Paolo Ippolito and the double win in both the categories. Second and third place for the Lennox Racing drivers Hiltbrand and Gustavsson, fourth Adrien Renaudin (Sodi) and fifth Jeremy Iglesias (CRG). European Champion title for Riccardo Longhi with the sixth place and seven more positions recovered at the end of the day. Yet another trophy in the trophy cabinet for the men in red, this time with their team manager.