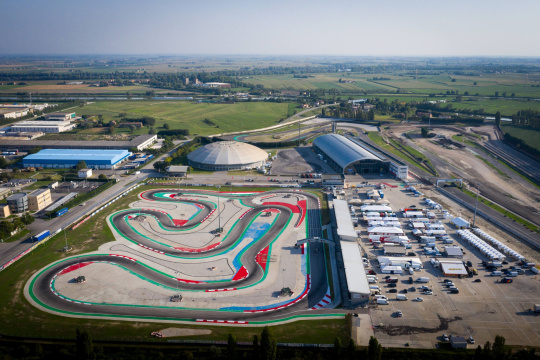 Author: Vroomkart International
On the hottest weekend of the year, KZ and KZ2 will put the spotlight on the 2021 European Championship. Who will win?
It is going to be a very hot August 15th on the circuit of Adria, scenario of the European season finale as far as the gearbox classes are concerned. KZ and KZ2 will follow up the spectacle already shown in Wackersdorf during the first of the two scheduled events.

KZ - Longhi vs Denner
All eyes are still on the title holders, that is the Birel Art men. After the great performance in Wackersdorf, "Riccardo Lionheart", as he was mentioned on Vroom in July, leads the general classification with 34 overall points and a great desire to write his name in the roll of honour. Longhi will have to confirm what he has done so far, keeping at bay the competition led by Emilen Denner. The French Intrepid driver has already made his mark on the Adria circuit, proving to be really strong and ready to make the European Championship his own in his comeback season in karting. Third force so far, the first of the CRGs, Alex Irlando with 22 points already obtained. Irlando will be among the favourites in the light of his success, then with Birel Art colours, last season. Stan Pex and Pedro Hiltbrand are also to be kept an eye on in the absolute top five, great expectations also for Jeremy Iglesias on CRG, Simo Puhakka for Tony Kart and Viktor Gustavsson. The Swedish driver made Adria his feud, winning the KZ2 European Championship last season. Decidedly underwhelming in Wackersdorf, the Lennox Racing driver will want to have his say. Debut for Jaime Algersuari (CRG) after the forced stop in Germany.

KZ2 - One seat for four constructors
KZ2 is ready to put on a show from the beginning to the end, with the best drivers of the category called to defend themselves from the outsiders. On the circuit of Wackersdorf, victory by a measure for a surprising Senna Van Walstijn (Sodi Kart) virtually unrivaled in the final category. The Dutchman with 35 points currently leads the rather compact group starting from Giacomo Pollini (NGM Motorsport - CRG), first of the Italians and direct pursuer for the success he has been skimming for a few seasons. Pollini, in turn, will have to watch his back against Laurens Van Hoepen (Lennox Racing), who is clearly improving his performance, and Leonardo Marseglia (KR), who was impressive in his race pace in Germany and in his recovery up to the foot of the podium. Holland against Italy, at least for now, a fight at the top that will almost certainly be reshuffled by many other pretenders to success.

The weekend will officially start on Friday with the qualifications, Saturday dedicated to the heats, Sunday 15th August dedicated to the category finals that will award the title of European Champion.