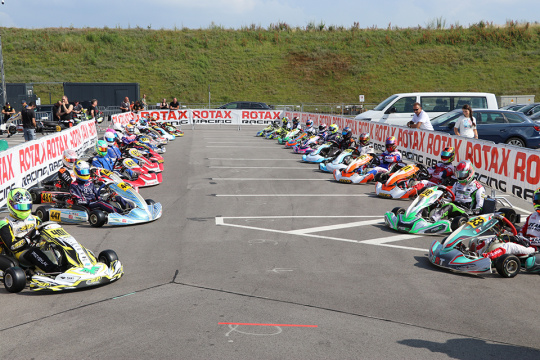 Author: Vroomkart International
Arena E, Mülsen Germany, July 16-18, 2021, Round 3 – The first visit to the Arena E circuit in Germany created an interesting third round of the Rotax MAX Challenge Euro Trophy over the weekend in Saxony, with the impact of the rain from summer storms that swept across the nation also influencing the final results at the international event. Two classes already determined the 2021 champions amidst the close and uncertain battles that played out: in Senior MAX, Callum Bradshaw reminded us again why he is the current FIA Karting World #1 and French DD2 Master Paul Louveau continued his successful campaign to secure the championship [Text – Jen Wade & Photos – ©Timo Deck/MotorsportXL & PH24]
The track at Mülsen proved to be difficult, to say the least, for numerous drivers during the heat races Saturday, while some random penalties and hard luck claimed the high expectations of others. Sunday was dry, but not so warm, when the field of nearly 100 competitors went into battle for the all-important points. This also included the much-anticipated first round of the Rotax Project E20 eKart Euro Series with an RMC Grand Finals 2021 ticket to Bahrain as an added incentive to win.

JUNIOR MAX
Mikkel Pederson was pole position for Final 1 Sunday, having qualified ninth, the consistent RS Competition driver had a best heat result of P2 to rank one point ahead of pole-sitter Ethan Jeff-Hall with a win. Defending champ Kai Rillaerts ranked third in keeping his title chances in sight, with one result outside the top 3 and would line up beside Thomas Strauven on the grid, while his German teammate Farin Megger took victory in two heats to rank P5. The first final was fought out between half a dozen front-runners, eventually seeing Megger, the Mini MAX winner of the RMCFG 2018 in Brazil, take line honours. However, a front fairing penalty promoted Jeff-Hall to victory from Matthijs Terlouw and Bruno Mulders of the Netherlands. The racing was action-packed once more in the afternoon final, as the leading group diced for positions. The high curbs added to the challenge, but it was the tiny British junior Ethan Jeff-Hall who got into the lead to pull a gap and record his best Euro result yet, climbing to third in the series’ points ahead of Matthijs Terlouw, P2 in the last final and second on the podium. Austrian Raphael Rennhofer took P3, while Bruno Mulders was third overall. Kai Rillaerts still holds his lead in the standings by 23 points over JJ Racing teammate Mulders, but was obviously disappointed with P6 and lost opportunities.
1. Ethan Jeff-Hall (GBR)
2. Matthijs Terlouw (NED)
3. Bruno Mulders (NED)

SENIOR MAX
The series leader and fastest qualifier, Callum Bradshaw, had a near perfect score in the heats to start Final 1 on pole, losing only the first race to Bouvin Power’s Luca Leistra. The Belgian ranked third by a point to Bradshaw’s Strawberry Racing teammate Mark Kimber with two wins, while the German champion Linus Henson was also a race winner. The field of 31 entries turned up the heat in the Finals when they were combined, with a shortlist of potential winners swapping the lead in the first main race. United Arab Emirates-based Lachlan Robinson crossed the line in front, only to be demoted to P5 with a bumper penalty, handing his KR Sport teammate [and former Australian rival] Sean Butcher the victory. Leistra was unable to prevent Bradshaw from relegating him to P3. Final 2 was another nail-biter! Robinson was on a mission and nobody could stop him; he grabbed the lead on turn 2 in lap 6 and set himself up for his first Euro Trophy race win and third step of the podium. With minutes to go, Bradshaw got into second ahead of Butcher, who won enough points to be first in the day results, and the British star Callum Bradshaw added another title to his portfolio to be crowned RMCET 2021 champion. Hungary’s Zsombor Kovacs made a remarkable recovery from ranking P26 after Saturday’s heats to take a superb P4 from pace-setter Kimber and Leistra, both caught up in race incidents early during the 18-lapper. The pair is split by Lachlan Robinson in the standings going into the deciding round at Wackersdorf near the end of the summer break.
1. Sean Butcher (GBR)
2. Callum Bradshaw (GBR)
3. Lachlan Robinson (UAE)

ROTAX DD2
Mathias Lund revisited his winning form from the opening round at Genk, taking two heats in the rain to start on pole Sunday ahead of the 2020 Rotax Euro 2-speed gearbox champion Xander Przybylak, with all top 5 places. The third race saw the talented Martijn van Leeuwen take the chequered flag to rank P3 in front of Lund’s RS Competition teammate, Ville Viiliaeinen. The Finn was too strong when it counted, conquering an outstanding line-up of experienced drivers to claim the third round victory. Lund was second in both finals and now sits in P3, three points in arrears of Viiliaeinen in the title race. Van Leeuwen was a close third in Final 1, but the series’ leader’s younger brother, Jakub Bezel, gained a position to take P3 next race, denying the Dutchman a podium place. The championship is still open with Petr Bezel leading. He lost vital points following a penalty for a collision with another former Rotax World #1, Paolo Besancenez. Missing from the front was Friday’s pole-sitter Sebastian Janczewski, who fell out of contention and was just unlucky, yet the Pole fought back from rear-of-field, setting the best laptime in each final to finish inside the top 10 overall.
1. Ville Viiliaeinen (FIN)
2. Mathias Lund (DEN)
3. Jakub Bezel (CZE)

ROTAX DD2 MASTERS
On his RMC Euro Trophy debut, Paul Louveau won his first outing in Belgium and added Mülsen to the tally, thereby confirming his first international DD2 Masters’ title at round 3. The DSS driver won of all three heats Saturday from pole position, while previous round winner from Italy, Alessandro Glauser, had sufficient points to join him on the front row in Final 1. Germany’s Michael Becker ranked one point behind the FM Racing entry and was part of the incredibly close combat Sunday, where he posted the fastest race lap. Unfortunately for Glauser, a retirement while leading the first race ended the Swiss driver’s chance of threatening Louveau’s victory, but he regrouped and came through for P3 in Final 2. The Frenchman won the day and stood proudly on the top step of the podium, flanked by Michael Becker and fellow-countryman Christophe Capitaine in third; the order of the initial final. Alessandro Glauser is P2 in the points over 2019 DD2 World #1 Roberto Pesevski.
1. Paul Louveau    (FRA)
2. Michael Becker (GER)
3. Christophe Capitaine (FRA) 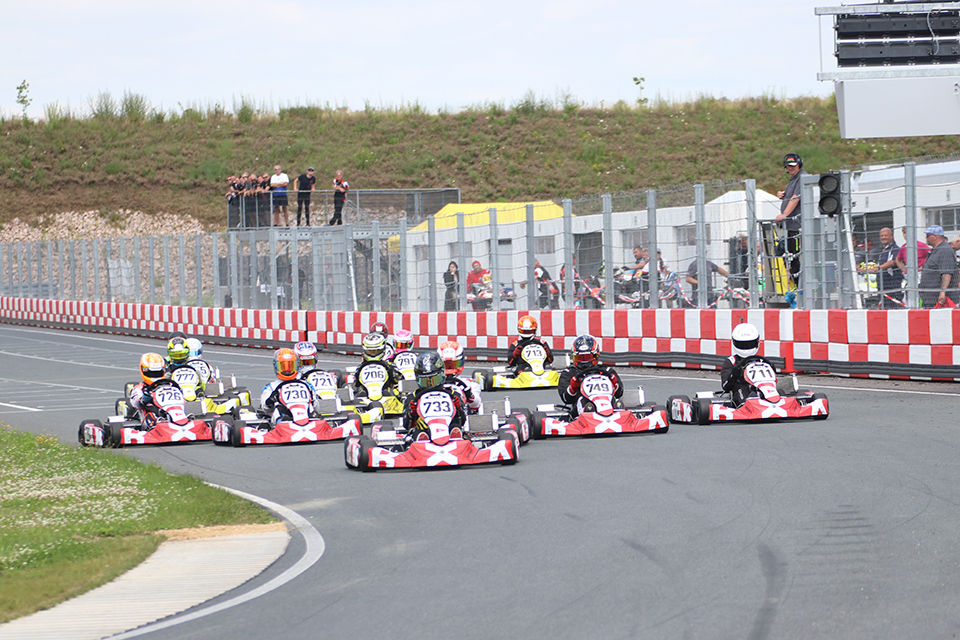 ROTAX PROJECT E20
10 nations were represented in the Rotax Project E20 field of 14 drivers, with most competing in the eKart for the first time. This provided an exciting series opener in the new two-round championship at the German editions of the RMC Euro Trophy, most new to the Saxon circuit and considering the changing track conditions across the weekend. DEKM series driver Theo Kekati ranked highest following the heats with a double win, hot off his Race 1 victory a week before at the DEKM German Electric Kart Championship at Mülsen. The Italian South Africa-born DD2 driver, Luca Munaretto, known for being the first Rotax International Trophy champion in Le Mans, took the other heat win to share the front row on Sunday. Denmark’s Mathias Jakobsen looked likely to be up there too, finishing twice in P2. In Final 1, Kekati was locked in a battle with Nikita Gense and narrowly won the race in a photo finish 0.005 seconds at the flag. However, a front fairing penalty for the German moved the Czechian Jan Matyas and Mete Argun of Austria into the top 3 places behind the Abu Dhabi teenager. Fastest qualifier Ellis Spiezia hit the limelight once again in the last race of the Euro program. Having lost some of his momentum in the wet, the American set the pace in Final 1 before ploughing through the field from grid 6 to take a convincing win. Kekati used his Boost strategy to take P2 from Gense, ensuring the UAE driver the round 1 victory and his RMCGF ticket to Bahrain. Ellis Spiezia was on the next step of the podium by a gap of only two points to Jan Matyas. The best race lap was set by the DEKM Final 2 winner from Mülsen the Sunday prior, Luca Nieuwenhuizen.
1. Theo Kekati (UAE)
2. Ellis Spiezia (USA)
3. Jan Matyas (CZE)

The final edition of the RMC Euro Trophy for 2021 returns to Bavaria in Germany to the popular Prokart Raceland circuit, Wackersdorf from September 3-5 at the end of the summer holidays. Two of the RMCET champions are yet to be decided and seven out of the nine Grand Finals tickets are still to be won. Plus the second edition of the Rotax Project E20 Euro Tour series invites competitors to join the grid for their chance to experience the unique performance of the BRP-Rotax ePowerpack.
The Wackersdorf round winner and the championship leader in the eKart class (including Mülsen) will also be awarded their RMCGF ticket to compete for the first Rotax Project E20 title in Bahrain.

RESULTS
Watch the racing action and the finals videos are on the Camp Company channel on YouTube – https://www.youtube.com/channel/UCooddsZW5ZnkBwULUHrihkA
The RMCET homepage has the direct media links, more info and details to register for round 4 – www.rotaxmaxchallenge-eurotrophy.com

Download the Rotax Global App from the App Store or Play Store to have complete access to all of the direct online links, entry list, track info, results and series details on your mobile phone or device.