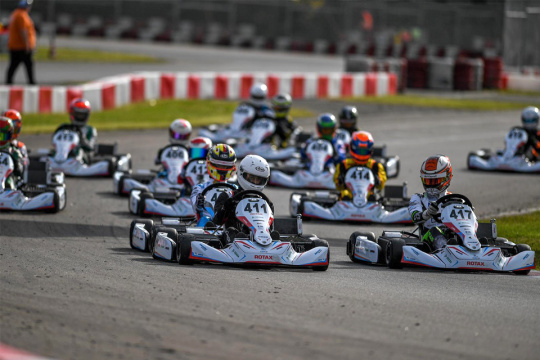 Author: Vroomkart International
This weekend will see the high performance Rotax Project E20 makes its racing debut at the Arena E circuit in Muelsen, Germany for the second round of the German Electric Kart Championship (DEKM) 2021 from July 9-11. (j.w)
Following the exciting season starter in Wackersdorf at the beginning of June, as part of the DKM program, this edition of the innovative eKart series joins the Rotax MAX Challenge Germany for the first time, bringing the latest sustainable concept in karting to feature within the Rotax national level racing. Finland’s Aleksi Jalava leads the DEKM standings coming into the event, having secured both pole-positions and a victory at the opening round in Bavaria.

Free practice got underway Friday, July 9 in rather cool [for summer] 14°C wet conditions, where the 14-year-old Finn was setting the pace in the rain along with Dutch driver Luca Nieuwenhuizen, who currently ranks fourth in the points. However, with warmer, sunny weather on the outlook for Saturday’s official timed practice, qualifying and finals, there could still be a few surprises in store. Sunday looks set to make a switch-back to showers, keeping the competition interesting for day two. Oscar Pellemele of France sits in P2 behind Jalava and is keen to turn the results in his favour. Eight countries are represented in the field, but the points are extremely close throughout, so the title and the prize of a RMCGF ticket to Bahrain remain open. Unfortunately, the third-placed Maxime Furon-Castelain is out injured, while two other series drivers are also missing from the grid due to illness.

The special VIP guest this weekend is a young Austrian lady, previously a Rotax MAX racer and motorsport driver, Corinna Kamper. She’s part of the team on the new ORF TV F1 Motorhome show alongside Rotax eKart ambassador Ferdinand Habsburg and the former F1 professional Alex Wurz, who’s now also the virtual race coach at the interactive Rotax MAX Dome eKart indoor centre in Linz. Corinna is excited to be back on track to take on the new generation of eKarters. Of course, like her ORF pitlane colleague and WEC driver Ferdinand, Corinna’s notable competitive nature means she’s aiming for nothing less than a podium finish when the lights go out in Muelsen at the DEKM!

The 1,315 metre Motorsportarena close to Zwickau opened its gates in 2019, providing another international venue in Europe. Located within half an hour of the iconic Sachsenring in Eastern Germany, this state-of-the-art track includes multiple straights combined with hard-braking zones and tight, technical corners that will test the drivers’ skills, regardless of the conditions. The much-anticipated DEKM round at Muelsen was cancelled last year during the Covid pandemic, but the eKart competitors will return once again in September as part of the DKM calendar, where guest drivers are also welcome to register for the final edition and their chance to experience the Rotax Project E20 for themselves. This also applies to round 3 in Genk, Belgium in just three weeks’ time.

Follow all the eKart action online from DEKM #2 via the official homepage – www.dekm.de

Saturday – Live Timing starts at 11am and Livestream from qualifying 1 at 1.15pm