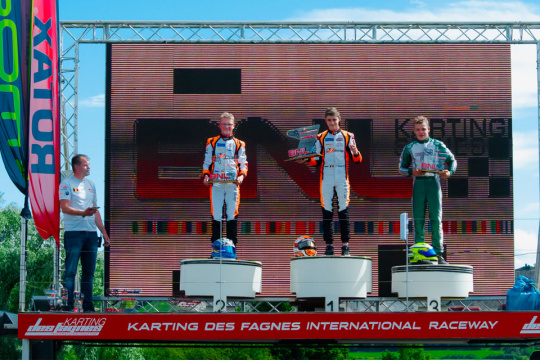 Author: Vroomkart International
Around 100 drivers from over 10 different nations headed to Karting Des Fagnes in Mariembourg, Belgium for the second round of the BNL Karting Series season, which headed to the Couvin region for the first time in nearly two years (Text Alex Goldschmidt -© Pictures of Things Going Quick)
With the welcome return of both Micro and Mini MAX drivers to the championship, both classes were competing for a prized ticket for the forthcoming Rotax MAX Challenge International Trophy at Le Mans later on this month.

Despite the very varied weather, which saw sunshine, clouds, thunderstorms and torrential rain, the action in all six classes did not disappoint.

Micro MAX saw Tom Papenburg take three out of four victories, securing him not only the championship lead but also his ticket for Le Mans in the process. He would come out on top of the likes of Boaz Maximov and Lorenz De Cock, who completed the top three.

Bouvin Power’s Mateja Radenkovic took top honours and booked his place at Le Mans by not placing outside of the top two all weekend, securing three race wins and a second, whilst Dutch wonder Mees Houben took a solid second place finish on his way to placing second, ahead of the #198 of Belgium’s Lawrence Herbots.

Kaï Rillaerts would have the perfect weekend in Junior Rotax, as the youngster from Belgium was simply untouchable, taking a maximum score in the process. Germany’s Farin Megger showed great consistency in his BNL campaign, and took three third place finishes, before taking second in the final on Sunday. Dutch racer Matthijs Terlouw was also showing some solid pace, with Saturday working out a bit better for the #242, but would still place in the top five all weekend long.

It was a welcome result for another Belgian in Senior Rotax, as GKS Lemmens Power’s Dylan Lahaye would hit the top step of the podium, after two dramatic races on the Sunday. He would finish just one point ahead of defending champion Sean Butcher, with new championship leader Luca Leistra rounding out the podium. Keep your eyes on KR-Sport’s Lachlan Robinson, who is in the hunt for the title with one more weekend to go.

It may have been a one-off appearance for DAEMS Racing team’s DJ Liveris, but the Greek driver showed that he has been very much missed in the series. The 2019 runner-up stormed to pole position on both days, and secured the top step with two wins and two second places.

This was ahead of defending champion Glenn Van Parijs, who with a good haul of points, extends his championship lead. Dutch racer Mick Nolten completed the top three, as the #403 would take two fourth place finishes on the Saturday, before a third and second place finish in the Pre-Final and Final on Sunday secured him the top step on the podium.

It was a weekend to remember for France’s Rudy Champion, who is very much on course to defend his title with a maximum score at the 1,388-metre circuit, putting him on the top step of the rostrum. It would be a French 1-2, as countryman Jonathan Wemaux took the runner-up step, with Belgian Tom Desair ending up third by just two points.

«It has been a welcome return to Mariembourg for us here at the BNL, and it really was a great atmosphere with great racing, despite the difficult and changeable weather conditions – explained series organiser Dave Ritzen. We were really happy to have both the Micro and Mini drivers back, and it was fantastic to give away the weekend winners a ticket to Le Mans for the International Trophy. But now we look forward to seeing who will be our champions in Genk this October.»

The third and final weekend of the 2021 BNL Karting Series season will take place at the “Home of Champions,” Karting Genk, between October 9th and 10th this year, where they decide their champions, and who will be heading to Bahrain in December for the Rotax MAX Challenge Grand Finals.