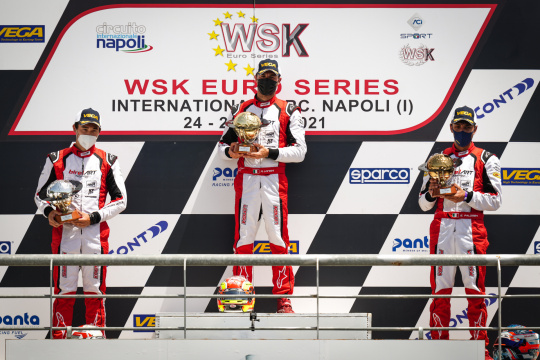 Press Release by: Birel ART
The Birel ART Racing team already made history in the WSK Euro Series last year by placing three of its drivers in the top three places in the KZ2 Championship. The brand from Lissone has repeated this formidable feat in 2021 with Longhi, Kremers and Palomba. The undisputed star of the category, Birel ART / TM Racing is definitely the ultimate weapon for collecting international victories.
"I felt a deep joy after this new overall success for the Birel ART colours," confided Riccardo Longhi, the team manager. "The confidence of its president Ronni Sala and the commitment of the entire factory behind the Racing Team have contributed greatly to our success, not forgetting our historic collaboration with TM racing for the engines. I am personally very happy to have won the WSK Euro Series for the second time in a row, but I am experiencing it differently this year because of my responsibilities in the team: it is much more intense. Big congratulations to Marijn Kremers who couldn't take the track in Sarno because of rib pains after his crash in Wackersdorf and who nevertheless finished 2nd. Congratulations to Giuseppe Palomba for his major role in the team's success along with Alessio Piccini. The rise of the Leclerc by Lennox Racing team adds to our satisfaction. Pedro Hiltbrand put in a fantastic performance by winning at Sarno and moving up to 4th place in the Championship to strengthen our brand's hold in KZ2 with no less than five Birel ART chassis in the top six. There were very positive results also for our drivers in the other categories."

The third and final round of the WSK Euro Series was held on the new 1547m Circuito Internazionale Napoli in Sarno. In the hot weather, the Red Army followed a team strategy to achieve their goals. Giuseppe Palomba was in the top five at the beginning of the meeting, and he was able to express his talent by coming back to 3rd place in the Prefinal before finishing 2nd in the Final, while Pedro Hiltbrand took his first victory at the wheel of a Birel ART / TM Racing kart. Riccardo Longhi, focused on the title, set the 3rd fastest time before holding on to 2nd place in the Qualifying Heats and then in the Prefinal. He managed his Final race perfectly and settled for 4th position to secure the WSK Euro Series victory. Alessio Piccini progressively climbed up to 6th position to complete the table. Winner of the WSK Super Master Series two months earlier, Marijn Kremers watched the race from the side of the track, as his sore ribs did not allow him to participate in the Final phase of the competition. Thanks to the lead he had after the first two races, he joined his team-mates on the second step of the podium of the season in a total success for Birel ART.

OK podium for Kucharczyk
Tymoteusz Kucharczyk had several setbacks since his 3rd in Qualifying in OK. Winner of his first heat, he was 4th in his Prefinal, but then he was eliminated at the very beginning of the Final, which did not prevent him from finishing 3rd in the WSK Euro Series thanks to his previous results. Cristian Bertuca put in a very good performance that saw him once again reach the top 10 in the Final, while Matheus Morgatto did not finish the race.

Top five for Macintyre in Junior
William Macintyre's performance demonstrated the excellent competitiveness of the Birel ART / TM package in OK-Junior. He obtained his best result of the season in Sarno thanks to good heats in which he set three fastest laps in the race. He continued his progression during the Final stages to finish in 5th position and enter the top 10 of the Championship.

Strong performance in Mini
After a difficult Qualifying, Dries Van Langendonck made up 32 places in the heats and qualified in 6th position in his Prefinal. Unfortunately an incident delayed him at the start of the Final and he was unable to show his talent and the competitiveness of his equipment.