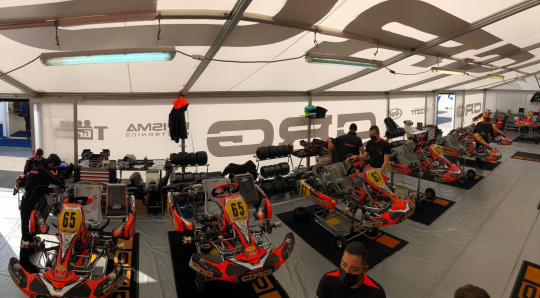 Author: Vroomkart International
During the last stages of 2020 and, above all, at the beginning of 2021, it was the team of the "All Blacks" to revive the great interest in the queen class. With the European Championship just around the corner, the moment of truth has arrived.
A top-level drivers' market since the beginning of the year, until a few weeks before the debut in the FIA European Karting Championship. A change of gear - it is the case to say - for CRG to attack the competition with the clear aim of conquering that Continental title which has been missing from the cabinet for some years, with the last successes in a row by Paolo De Conto in 2017. The arrival of Jeremy Iglesias, outgoing world champion, and Alex Irlando during the winter drivers' market was an unequivocal signal from the most emblazoned team in the history of Cik Fia competitions: to return to occupy the first step of the Cik Fia podium. And the addition of an expert driver like Jaime Alguersuari makes the CRG Team's ambitious intentions even better. However, the Spanish driver will not take part in the first round of the European Championship because of some problems with his ribs.

«We have strengthened the KZ team after a 2019 of transition for several reasons: on the one hand because of De Conto's retirement and Hiltbrand's exit from the team, but also and above all because of the advent of Co-vid in the first months of the year which conditioned our strategies. It must be said, however, that the main objective that we set ourselves with such an experienced team, even before the sporting results, is to develop the technical material in the best possible way in order to offer our customers all over the world a quality and performing product». Said Giancarlo Tinini in our last interview.
Continuous development as a mantra that must necessarily pass through results on the track. To this purpose, in the few days before the German weekend of Wackersdorf, the first round of the European Championship, we talked with Marco Angeletti - Marketing and Communication for CRG - about the prospects of the umpteenth new start of the CRG season.

- Since the "market movements" at the end of 2020, CRG has created interest in its KZ and KZ2 line-up. With the European Championship now just around the corner, how does the team arrive in Germany?
«The preparation work for the FIA races has not been smooth for the simple reason that the Federation only communicated the tyres that will be used in these events a few weeks ago, after delays and changes of suppliers. In spite of everything, we believe that we will be ready, both from a technical point of view and in terms of the harmony between the drivers and the technical staff, which is one of the points on which we have worked the most in the first months of the year, having 6 new drivers out of 8 in the team. Obviously, having two top drivers like Iglesias and Irlando alongside Paolo Ippolito in KZ, makes us raise the bar of our ambitions significantly. To complete the KZ line-up, moreover, we also had the opportunity to record Jaime Alguersuari's return to Karting, so we can say we have one of the most competitive teams in terms of drivers. The same is true for KZ2, where we have joined Brandon Nilsson with a very experienced driver like Pescador and two very fast youngsters like Tonteri and Giannoni».

- There have already been races where the team has tested its potential. What aspects have you concentrated on, especially with the newcomers?
«As I said, the races at the beginning of the season allowed us to familiarize the new drivers with the team and from the technical point of view we worked on our models for KZ, which include, next to the classic Road Rebel with 32mm tubes, also the KT4 with 30 and 32mm tubes and a third model with 30mm tubes. From this point of view the experience of drivers like Iglesias and Irlando is guaranteeing us an excellent added value. The other key point of our programme in KZ is the partnership with TM, which will officially supply Iglesias and Irlando with factory engines, while Ippolito and Alguersuari will be followed on track by the trainer Cedric. In KZ2, on the other hand, our drivers will be assisted by the experience of Gianfranco Galif-fa, again with TM engines».

- There is great interest in Alguersuari's return to karting with CRG colours. Considering how well he performed in the Spanish Championship, what do you expect from Jaime?
«Jaime has shown since the very first test that he has a great determination from a mental point of view, but above all that he is very competitive and fast. He has not forgotten anything about the automatics of driving on the track and today he is able to benefit from all the experience he has gained at the highest levels of motorsport. He took part in the CEK race to regain his feeling for the action, the starts and the overtaking and it all came naturally to him. Unfortunately he had to stop on Sunday because of a sore rib and we are monitoring the situation day by day. Unfortunately he won't be able to race in Germany, but we'll see what happens at Adria».

- With only two rounds on the calendar Wackersdorf will be decisive, but it will be Adria that will close the games. This can be a favorable data to fight even more on one of the tracks "home"?
«A championship on two rounds makes both races decisive and it could happen to win the title even with two simple placings, as a withdrawal in one of the two races is very penalizing. You may or may not like this for-mat, but the fact is that drivers who don't score points in Germany will go into the Adria race with zero chance of winning the title. So, for the time being, we're concentrating on this race and then we'll think about the home race, where, of course, we have much more known data, even if being part of the WSK circuit, besides having already hosted a European KZ race, all the teams and drivers of International Karting know it very well».

- What are the strong points of the CRG Team at present?
«For the moment we have only run the first two rounds of OK and OK Junior and, honestly, the di-rect drive categories in our Racing Team are the ones where we are mostly "working in progress", from the drivers to the technical staff. On these categories, moreover, the effects of the FIA races are even more marginal because few ASNs have adopted them and we have to work on several fronts also with the single-make Trophies for our promotion activities. As far as KZ classes are concerned, on the other hand, the market is much more homogeneous at international level and for our company these categories have always been a priority from a commercial point of view. Also the investments made during the winter go in this direction: we have set up a team to be competitive and the most important FIA races of the season for us start right now in Germany».