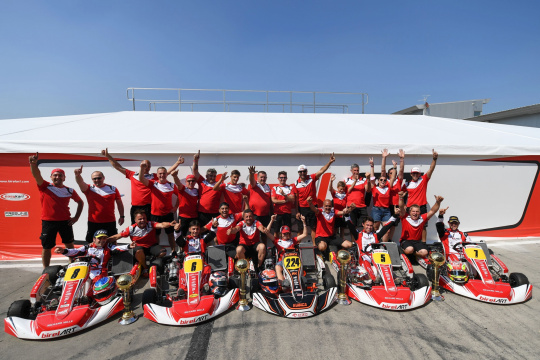 Author: Vroomkart International
Birel Art scores a dominant poker in the WSK weekend in Adria. First four places monopolised in the KZ2 final.
If Birel Art had by now become accustomed to the absolute monopoly of the podium in the queen class, with the poker obtained yesterday he has put one more milestone in his winning path, which is about to experience the European Championship.

A complete domination that left no space for imagination, led by the usual Marijn Kremers. The Dutchman continues to send important signals to all the competition, taking home the umpteenth "Grand Chelem" with pole position, victory and fastest lap of the race. In second place a solid Riccardo Longhi, this time in the role of experienced driver as well as Team Manager of the team of Lissone. The silver medal came in a comeback over his teammate Alessio Piccini, now in tune with the Birel Art universe and increasingly competitive during his first season in red. Fourth position assigned to Giuseppe Palomba, also making a comeback from the start and author of the final poker.

A real "Red Army" in fact that will be so in Wackersdorf for the opening of the European Championship. An important visiting card to make things clear from the start with the opponents of the category, KZ and KZ2. With only two appointments on the calendar, every placement will be decisive, a "tactic" that Kremers, the reigning European Champion, knows well, after the great ride in 2020 with Daniel Ricciardo's colours.

In addition to the poker in the queen class, it is also worth mentioning the second position of the Robert Kubica/Birel Art driver, Tymoteusz Kucharczyk in the OK category.