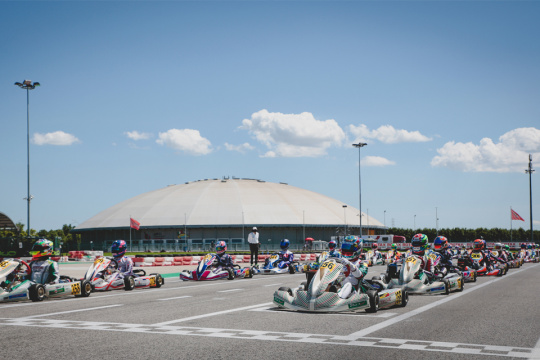 Author: Vroomkart International
Adria Karting Raceway (I) May 30, 2021 - Round 2. Following an intense day of qualifying heats Saturday, the round 2 finals of the Rotax MAX Challenge Euro Trophy saw the close racing continue, with new winners gracing the podium at Adria Karting Raceway in Italy Sunday [Text – Jen Wade & Photos – ©Matteo Segato & ©Nina Meggar]
Making their single appearance on the program at the international event, the Micro MAX and Mini MAX categories gave the youngest drivers an insight into what they can look forward to at this level, while the wide-open 1,302 metre Adria circuit allowed for many exciting battles across the weekend.

In Micro MAX, pole-sitter Dragos Avasilcutei fought back to take the victory in Final 1 by just 0.052 seconds ahead of heat 3 winner Jakub Gasparovic, while Paul Schoen led the fight for third to the line. However, Schoen turned the tables in Final 2, taking the win from Avasilcutei and setting the pace in both races. He was therefore second on the podium behind the Austrian, who took home the ticket to Le Mans for the Rotax International Trophy in July. A superb comeback from Boaz Maximov in Final 2 to take P3 ahead of Gasparovic, third on the podium, meant the Dutch driver narrowly beat Noah Janssen in the points tally to be fourth in the day results. All of the Micro MAX competitors really deserve congratulations for their great sportsmanship displayed throughout the event.

The standout driver in the Mini MAX was without any doubt Mees Houben from The Netherlands, qualifying on pole and unbeaten in his faultless execution of every race, including both finals. He was also awarded with an invitation with free entry to the RMC International Trophy this summer, where he’ll compete against even more drivers from many other countries. Full credit goes to local Lorenzo Lanzara, who gave it his best shot at the start of Final 2 to take the lead from the eventual winner and pushing to further bridge the gap by the end of the day. He was second overall and Latvia’s Tom Strele outdrove his rivals to finish with two third places for a spot at the prize-giving ceremony too. The little lady of the field, Lisa Billard, fought hard to maintain her P3 ranking after the heats, ending up only four points in arrears of Mats van Rooijen to be fifth overall. Watch out for this French girl!

The Junior MAX champion of the Euro Trophy in 2020 led both finals from pole position for a lights-to-flag victory, collecting maximum points and assuming the lead in the overall standings. A focused Kai Rillaerts said he was really enjoying the good racing at this great venue in Adria, aiming to leave no room for error to set himself up for the best chance to take control of the series. The Belgian was shadowed by teammate Bruno Mulders, who shared the front row and posted quickest lap in the second race, while Italian Alberto Kiko Fracassi was fastest in Final 1, just outside the top 10. Leon Zelenko and Matthijs Terlouw finished third and fourth in the morning race after some wheel-to-wheel combat amidst the front pack, then the results were swapped for the last final, seeing them end on equal points for the day and the latter being the decider for the podium. Behind them in the overall rankings were two of the winner’s teammates, Farin Megger and Max Knapen. The racing was not represented by the front-runners in effect though, with a lot of dicing and constant overtaking happening at every stage in the each of the finals throughout the field. As far as the championship goes, Rillaerts leads Mulders at the top and Thomas Strauven, with P7 in the day results, is in third ahead of the two absent SP Motorsport drivers from the podium at round 1.

f it appeared that Senior MAX newcomer Callum Bradshaw has been riding shotgun for his Strawberry Racing teammate Mark Kimber this year, having conceded both the BNL and Euro Trophy opener by a narrow margin, then he set the record straight in Italy this weekend. The FIA Karting OK Champion found his rhythm and was not about to let anyone else change that. Kimber did not have the best of events, yet gained as many places as he could in the finals to secure two top 5 results and sit P2 on the series ladder behind the new leader, Bradshaw. Belgium’s Luca Leistra managed to pass the second round winner temporarily in Final 1, but in the last race had to settle for second again, after battling with fastest qualifier Sean Butcher and Zsombor Kovacs, who unfortunately retired after the duo clashed in the fight for third and he bounced over the curb. Leistra had a much better result than he did at his home track in Genk to be P3 in the standings ahead of UAE-based Aussie Lachlan Robinson and German RMC champ Linus Hensen, all of which were in the leading group. Apart from Bradshaw’s best final lap, local MAX hero Elia Galvanin was quickest in Final 2 in P6.

The Rotax DD2 took some unexpected turns over the course of the day, impacting the results and the championship. Rotax DD2 2019 champ Petr Bezel lined-up beside qualifying pole-sitter Philipp Moitzi in Final 1, with rival Xen de Ruwe and karting icon Davide Forè behind them. On the first lap, a pile-up left a handful of the highly accredited internationals out of contention; namely Luca Munaretto, Paolo Besancenez, Florian Breitenbach, Martijn Van Leeuwen, Mick Nolten and others. De Ruwe was hunting down Bezel in the lead, until the throttle cable broke on lap 7, leaving him devastated and Moitzi up to P2 ahead of defending title-holder Xander Przybylak. This was the finishing order and Austria’s Machacek fastest closing on top 10. In the late afternoon final, Moitzi got the jump to lead, but Bezel regained it for a convincing win, sealing the overall victory and first in the standings. Przybylak came under pressure from heat winner Ragnar Veerus and Ville Viiliaeinen; the pair eventually finishing second and third, while Moitzi was forced to stop, as was round 1 winner Mathias Lund with some damage. Poland’s Sebastian Janczewski clocked best race lap on his way through to take P4 and be fifth overall ahead of Przybylak P5; classified fourth in the day results and now third in the series, only five points behind Lund. Just a few points separate Viiliaeinen and Van Leeuwen, a non-starter in Final 2, ranked fourth and fifth going into round 3 in Germany.

Rotax DD2 Masters is the only class not to see a new championship leader following the event in Adria. Paul Louveau was unable to repeat his dominant result from Genk, still managing to be runner-up on the weekend after taking second place in both finals behind Alessandro Glauser. The driver from Switzerland was simply too fast for the competition, setting the pace Sunday and making it a double victory to move up to second behind the Frenchman. 2019 RMC Euro and World #1 Roberto Pesevski rounded out the podium with two P3 finishes, boosting his title hopes by ranking third after two rounds. With the Masters running their own finals independent of the DD2 class Sunday, the racing was action-packed to the very last moments in any case. Priit Sei drove well to be a front-runner and confirm P4 in each final and the overall results, although Slovenia’s Primoz Matelic came extremely close to being third in the closing race of the day. It was an exciting end to the meeting and no doubt an indication of what’s in store next time! The most decorated Master on the grid, Christophe Adams, was P6 and ranks fourth in the standings three points in front of the previously second-placed Rudy Champion, who was not on track in Italy.

The third edition of the RMC Euro Trophy will be hosted by the 1,315 metre state-of-the-art Arena E circuit at Muelsen, nearby to the iconic Sachsenring in eastern Germany from July 16-18, 2021.

All the racing from the weekend RMCET Livestream coverage and the finals videos are on the Camp Company GmbH channel on YouTube – https://www.youtube.com/watch?v=AN2GUdlK43Q

The complete results are available on the Motorsports-events site – https://www.motorsport-events.se/camp/index.php?dir=rotax+euro+trophy%2F2021%2F03+Adria+Round+2%2F

Download the Rotax Global App from the App Store or Play Store to have complete access to all of the direct online links, entry list, track info, results and series details on your mobile phone or device