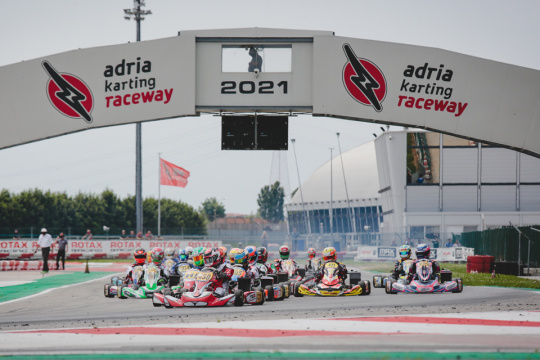 Author: Vroomkart International
DAY 2: Saturday – Qualifying heats. The second round of the Rotax MAX Challenge Euro Trophy is definitely turning on some of the best racing we’ve seen at the event over more recent years and judging by the level of the competition, it’s only going to make the finals another exciting day of track action at the Adria Karting Raceway! [Text – Jen Wade & Photo – ©Matteo Segato]
With 180 entries representing 28 different nations for the second round event, there were 24 qualifying heats run Saturday, each driver lining up on the grid three times in the six classes. The weather conditions were perfect at the 1,302m circuit in Italy, topping around 24°C and blue skies.

First to hit the track was Micro MAX, with the youngest category in the Rotax engine classes sporting an encouraging field of 17 drivers in its initial appearance at the Euro Trophy this season. When there’s 11 karts nose to tail mid-race, it offers an excellent possibility to learn so much as an entry level introduction to future international competition. The drivers are so excited to be able to compete together with many others who share their racing dreams and watch on as the more experienced drivers battle for positions. Obviously, having the chance to win a ticket to the Rotax MAX Challenge International Trophy in the summer is also an amazing prize for both Micro and Mini.

Fastest qualifier Dragos Avasilcutei from Austria won two of his races today, so he ranks at the top of the points following Saturday’s heats. Lining up alongside him on the front row for Final 1 on Sunday will be Slovakian Jakub Gasparovic after he took one victory and a second place. Maximilian Pilch P3 finished on equal points with fellow German driver Noah Janssen and they will start together on row 2. However, for those who were unlucky today, there are still two races left to fight for the podium.

In the next age group, Mees Houben continued his dominant run following on from official timed practice Friday, with the Dutch young gun taking three victories from three heats in Mini MAX. In fact, the top three remained the same as in the qualifying at the end of the day, seeing Italy’s Lorenzo Lanzara ahead of Lisa Billard from France, while Latvian Toms Strele ranks P4. There are twelve drivers in the category that uses the same smaller chassis as the Micro MAX, and they come from eight countries; four of which are from The Netherlands, host of the Rotax Grand Festival 2021.

With a full field of Junior MAX drivers pushing the limits from start to finish, there was no limit to the constant dicing and swapping positions throughout all six of the qualifying races. Although, it was a case of teamwork when the defending champion Kai Rillaerts looked set to claim his third win of the day, taking the opportunity to give his teammate and the Mini MAX World #1 in 2018, Farin Megger, a better look at the chequered flag. Keeping it in the team, the Belgian ranks P1 after the heat racing on equal points with another of his JJ Racing squad Bruno Mulders, with both taking two victories out of three. In P3 overall, pole-sitter Thomas Strauven was consistent with three second places and Croatia’s Leon Zelenko, who beat this Belgian across the line in heat 3, sits in P4 by just one point over Germany’s champion driver Megger. Meanwhile, local driver Alberto Kiko Fracassi will be aiming to regain his top three position considering his last heat didn’t go to plan. He’s been very fast since Friday practice. Of course, there’s always a list of new names to watch out for too.

Taking the racing to yet another level, Senior MAX is proving to be an absolute nail-biter, as they set some blistering laptimes in the warm conditions! Naturally, when you bring so many superstar racers and skilled drivers together at a great circuit like Adria, this is bound to create some fantastic racing. Leading the way into Sunday’s finals is the runner-up from Euro round 1 and current FIA Karting OK champ Callum Bradshaw, the Brit falling short by one place of making it a triple victory in the heats. He’ll start alongside double race winner Sean Butcher, who was classified on pole after the official decisions of the Group 1 qualifying session. One of Belgium’s most outstanding teens, Luca Leistra, shares the same points following a win and twice P2, just nudging race winner and well-known Hungarian Zsombor Kovacs out of a top three ranking. Behind the first two rows on the grid, the fireworks are set to go off with a pack of former racing champions that include Lewis Gilbert, Elia Galvanin, Linus Hensen, Lachlan Robinson and the series leader with a Junior Rotax #1 title in his lengthy portfolio, Mark Kimber, and all had top 3 results in the six heats. This is not to be missed!

Rotax Grand Finals 2019 DD2 champion Petr Bezel went one better than everyone else in the heats Saturday; the seasoned Czech taking two wins and a second to secure pole position for Final 1. Not to forget, he was runner-up at the Euro opener in Genk. Ranking one place behind with a win and two P2 is best qualifier Philipp Moitzi, while the driver who was third on the world podium to Bezel, Xen de Ruwe, was also a race winner and posted a fastest race lap – as did Austria’s Moitzi. Adding fuel to this fire, multiple FIA Karting World Champ and likely the most accredited driver currently racing today, Davide Forè ranks fourth after taking a heat victory plus P2 with the best lap. Ragner Veerus from Estonia took the flag first in the other heat and he’ll start on row 4 Sunday next to the defending 2020 European DD2 title-holder Xander Przybyla ranked 7. Finland star Ville Viiliaeinen and Saturday’s race pace-setter Florian Breitenbach fill the third row in the two-speed showdown. Prior to the final, the Second Chance decider will determine the remaining six grid places left.

The DD2 Masters was combined with the DD2 in the initial stages of the event, but the finals will see the two gearbox categories separated for the last day of competition as the drivers race for vital championship points and the prize of the coveted RMCGF ticket to Bahrain in December. It’s no surprise that another of the 2019 champions from the 20th edition of the Grand Finals in Sarno, Italy tops the rankings after the heats. Austria’s Roberto Pesevski was the highest-placed qualifier in the 32+ years class with a top 10 finish Saturday and is four points clear of round 1 winner Paul Louveau. A margin of only two points off the Frenchman, Priit Sei of Estonia will start beside Swiss Alessandro Glauser on the second row ahead of former series’ champions Christophe Adams and Slawomir Muranski. Depending on the outcome of the finals, the title fight going into the half-way mark in the season is well and truly shaping up to be a close one.


Live coverage on YouTube kicks off at 10.05am (CEST) Sunday, May 30th after the warm-up sessions with the Senior MAX Second Chance Heat. Each of the qualified drivers in the six classes will contest Final 1 and Final 2 for the overall winners. The prize-giving ceremony is scheduled from 4.45pm.

Livestream on YouTube is on the Camp Company channel – https://youtu.be/AN2GUdlK43Q

Find all the event results and time schedule on the virtual noticeboard – https://www.motorsport-events.se/camp/index.php?dir=rotax+euro+trophy%2F2021%2F03+Adria+Round+2%2F

Download the Rotax Global App from the App Store or Play Store to have complete access to all of the direct online links, entry list, track info, results and event details on your mobile phone or device