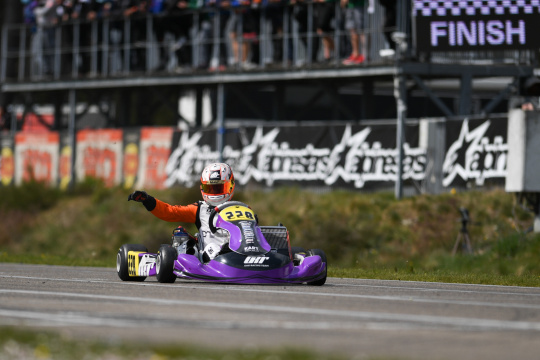 The Brazilian driver continues to be the fittest candidate for the next European Championship. Camara dominated the second Sunday in a row and managed to win the race despite starting in third place. After immediately taking the lead, Camara literally ran away, leaving his rivals behind. A good signal for the KR driver who is now preparing to climb the European Championship. Podium for the Tony Kart duo, Tuukka Taponen moved up three positions and Joseph Turney, still among the top drivers of the category. Top five completed by Arvid Lindblad and Andrea Kimi Antonelli, who started in pole position.

The reigning World Champion was not long in coming and on the circuit of Genk took the first leadership of the Champions Of The Future by dominating the race from the first to the last corner. The Englishman will have a fierce competition to beat but the preconditions to defend his title are good. Another podium for Tony Kart, second place with Harley Keeble, third place for Sonny Smith. Fourth and fifth place obtained by Alex Powell and William Macintyre, excellent comeback for the Birel Art driver with twelve positions gained.