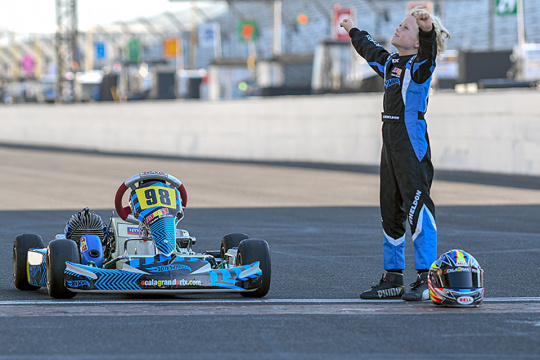 Author: Vroomkart International
Andretti Autosport has announced an expansion to the team’s development efforts with the addition of brothers Sebastian and Oliver Wheldon as junior drivers (© photo Indycar.com)
Most of you will remember that in 2011, at the age of 33, the two-time Indianapolis 500 winner and 2005 IndyCar champion Dan Wheldon passed away tragically following an horrific crash at Las Vegas Motor Speedway in the season finale. Ten years later, the Wheldon legacy continues.

«Dan was family to us, and we had a lot of on track success together, we see a lot of Dan in both Sebastian and Oliver and are very proud to officially welcome them into our racing family –, said Andretti Autosport CEO Michael Andretti – No one will ever be able to replace Dan in their lives, but we’re happy to offer a network for mentorship to help the boys grow their careers. Karting is the first step, but we have hopes of helping foster promising Road to Indy, and eventually even INDYCAR opportunities»

They are 12 (Sebastian) and 10 (Oliver) years old and the road in Motorsport has just started:  «I’m really excited to be a junior driver for Michael Andretti and follow in my dad’s footsteps. I hope Oliver and I can both win the Indy 500 too» said Sebastian. His younger brother is also focused on his future in racing: «It would be so cool to race for Andretti Autosport one day. I think we will get to win a lot of races, just like my dad».

Under the new mentorship program, the Wheldons will carry the Andretti shield into three national level karting series: Rok Cup USA, Super Karts USA and United States Pro Kart Series while competing with JC Karting. The boys will receive oversight and career guidance from Michael Andretti and the Indianapolis-based team where, the late Dan Wheldon recorded his first Indy 500 victory in 2005.