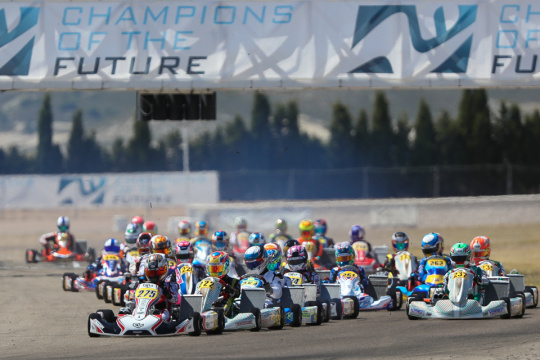 Author: Vroomkart International
The Champions of the Future begins the second season of their CIK Classes series in Europe next week from April 29 - May 2 at the Karting Genk – ‘Home of Champions’ circuit in Belgium (Photo: © RGMMC - Racebox/Alex Vernadis)
The first edition of the planned four round series is gearing up to welcome a total entry list close to 200, with OK Junior reaching nearly 100 drivers alone, as well as the Mini and OK fields, including more than 70 in the senior category. With numerous changes to the international calendar over recent months, the race promoters and hosts, RGMMC, announced their decision early last month to update the championship dates, in order to avoid conflicting events that would directly impact their competitors and suppliers. This, together with the ongoing influence of the Covid-19 situation, means the remaining dates are yet to be finalised at a later point during the season. At this stage, only two venues have been confirmed, with the second round planned for August 5 - 8 at Castelletto, Italy.

James Geidel, President of RGMMC, is extremely positive about the upcoming season, especially with the amount of interest from so many teams and drivers to be back on track racing once more.
«I’m pleased to see how the year has started already with the numbers of competitors racing in so many of the karting events, in all different series’, which is such a positive start for karting in general. We’re very much looking forward to another exciting competition, always working to improve too. Our plan was originally to make it four rounds, but with all the other series’ changing their dates, we just wanted to stop and wait to see what happens, then get this year up and running, so by the end of the season it should be back to four rounds hopefully. Naturally in one way, it makes sense for logistics and other things to follow the calendar where other events are being held because most of the teams are there already and they don’t have to travel from one place to another every week.»

The FIA Karting European Championship for OK classes follows the event two weeks later at Genk, with a driving ban enforced in between, which obviously makes the Champions of the Future an ideal opportunity for those drivers and teams planning to compete. However, with the busy 2021 calendar, there are also other races scheduled for the first weekend in May plus another interesting factor that is yet to play out – that the regulation tyres are not the same for the two events. The choice of MG Tyres by the organisation was ultimately determined by availability, unfortunately limited by the global pandemic, although the plan was always to follow the FIA guidelines. In any case, they are notably also the designated tyre for the FIA World Championships for OK in 2021.

«The gap coming from a mono-make championship into something like the FIA Karting Championship is a massive step, not necessarily for the drivers as it is for some teams,” he explains. “It’s completely different. Even though we say ‘karting is karting’ the difference of the markets is day and night, so I think the ‘Champions’ provides that next step and this opportunity when they may not be that dedicated, ready or prepared to go directly into the FIA limelight. It is that middle step that I think is really good for the people and we are noticing that more teams are inquiring. It’s a very good sign. I believe the Champions of the Future, in time, needs to become a standalone championship, but for now it is definitely seen as a preparation ground for the FIA events.»

When asked what can be expected or is different this year at the Champions of the Future, Geidel replied:
«Organising events costs increasingly more money every year. Take into account the extra staff required for managing the health and safety now, the personnel we bring to be able to produce the coverage and the social media for the service we want to deliver today. It’s a really hard process and we have to find ways to simplify this. The focus now for me is how we can use technology to give a better user experience. We also use the ‘Champions’ events as a little bit of a testing ground for new ideas and materials, as you know we are getting closer with the teams and there are people out there who have good ideas; whether it’s the technology or cameras, filming or streaming and so on, which gives us a great platform where we can test on a really high level, that I personally think is great. More and more – also in Genk, you’ll see some rather special new products coming up, which will soon be standardised products. It’s no secret we’ve started our own television graphics software company at SportsTVGraphics.com. This is the first cloud-based graphics software of this kind that we have spent the past 18 months developing. It makes it easy for race organisers to use for their own events, connecting directly to their timekeeping computer where they send the data to us and we deliver really high quality graphics for their livestream, as a very affordable solution. It’s quite unique. For karting, I believe this is going to be really special. And there’s even more to come!»

Track action begins Thursday with open practice before qualifying Friday ahead of the weekend’s race program. Find all the links to follow on the official website - www.championskarting.com