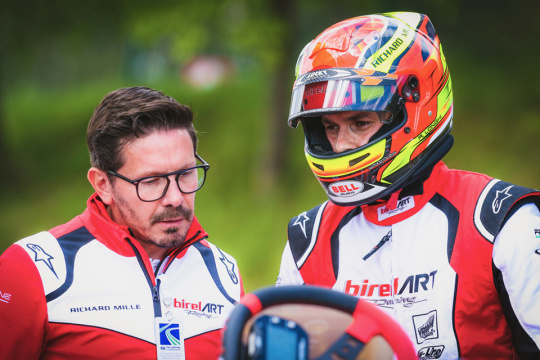 Author: Vroomkart International
For years he has been part of the Birel Art technical staff on the weekends he isn't driving as an official driver; starting today, he takes on the role that belonged to Luca Filini and, thus, takes up the challenge of being on the track in the dual role of driver in contention for the KZ World Championship and Team Manager. (© photo FM Images)
«I'm happy to have been chosen by Ronni Sala for such an important role. We certainly talked about the future and outlined various hypotheses, but for me it's a great opportunity in any case and I thought I'd accept the challenge. For now I will remain a driver and my objective is to be successful in both roles. There is a lot to learn but fortunately I can count on a great team. I know the company and the environment well, ours is a very close-knit team used to working together on the track.»

Birel's "Red Army" will certainly not fail its new Team Manager with providing the necessary support to face the dual and stimulating role of driver on the track and key man at the helm of the racing team under the tent.

Originally from Reggio Emilia, Riccardo was born in 1994 and, like many drivers of his generation, he began driving around the age of 8 on a baby kart, before trying his hand at 60 Minikart before moving on to KF and then in 2013 to KZ, again at the regional level. The first major success for him came in the Italian ACI Prodriver Championship in 2015, when he became champion in KZ2 with the colors of Team Modena Kart. He stayed stationary for most of 2016, while working as a mechanic for Team Emilia Kart: he returns to the wheel for the Trofeo delle Industrie which he wins again in KZ, showing that there is still potential to be developed.

In 2017 comes the call from Birel Art with which he wins a prestigious double by winning the Trofeo delle Industrie and the Trofeo Margutti in his debut season with Sala's team. He wins the WSK Open Cup in 2018 and fights to the last for the European, always in KZ2. Moving to KZ the following year, he obtained his best result ever in Lonato in 2019, finishing as Vice World Champion behind his teammate Kremers. Longhi's first official engagement will be the WSK Master series stage in Lonato on April 25th.