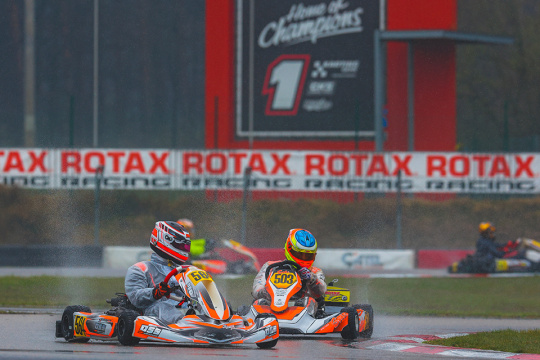 Author: Vroomkart International
Karting Genk, Belgium – Round 1 – April 11, 2021 (by J. Wade, © photo Rik Van Mulken/FM IMages)
RACE REPORT
Junior MAX was the first of the finals out on track Sunday for the last day racing at the Rotax MAX Challenge Euro Trophy, challenging the young Rotax racers in the chilly conditions after snow was forecast in the early hours. However, the close competition at Karting Genk – ‘Home of Champions’ was nothing like the low temperatures once the lights went out, explaining why this international event gives these budding motorsport stars the best chance to experience wheel-to-wheel racing.
Keen to defend his title, Kai Rillaerts lined-up on P1, after winning all three heats Saturday, alongside fellow Belgian Tom Braeken. The pair had fought it out in the qualifiers, so Braeken was quick to make his move to pass the pole-sitter early in the 10-lapper and resisted being caught before the flag, while his Dutch teammate Tim Gerhards took third ahead of Antoine Broggio and Marius Rose.
With grid positions swapped on the front row for Final 2, there was a shuffle for places at the start that left Rillaerts out of order and Gerhards soon into the lead ahead of Braeken. At 4 °C the track was still slippery enough for wet tyres and there were some pretty intense battles amongst the field. Thomas Strauven closed in on the leader, unable to overtake as he pulled a gap, finishing the race in P2. Rillaerts was setting some fast laps towards the end to climb back to third in front of pace-setter Braeken and Max Knapen, his JJ Racing teammate in fifth. It was an SP Motorsport double victory over Rillaerts with a close result at the end of the first round once the Finals’ points were combined.

The Senior MAX pole-sitter Mark Kimber left nothing to chance in Final 1, taking a most convincing lights-to-flag victory by a margin of four seconds while setting the best time of the race in the final lap. By the halfway distance, his British teammate Callum Bradshaw had passed Dylan Lahaye for second, to make it another front row lockout for Final 2, from Linus Hensen and Lachlan Robinson. As the rained stayed away, the circuit appeared to be drying somewhat and the brash decision was made for Kimber and Bradshaw to start on slicks, as did several other drivers hoping it would offer an advantage by the end of the race. Bradshaw got off to a flyer from the outside, but the pair were soon swallowed up by the pack, landing them mid-field in the opening stages in a struggle to keep it on track. It was the Aussie racing for the United Arab Emirates who shot to the front on wet tyres, Lachlan Robinson, only to be overtaken later by local star Dylan Lahaye, until of course the original front-runners showed up when their choice to run on dry tyres gave them the pace they needed. Bradshaw crossed the line ahead of Kimber, who had been swapping places until a slight mistake in the wet conditions saw him go wide, but a bumper penalty relegated the winner back to P2 and Lahaye also had five seconds added, so it was Robinson who was classified third ahead of German champ Linus Hensen and Lahaye fifth. Winner of the second chance race, Storm Broer, finished sixth. It was another 1 – 2 finish in Senior MAX, this time for the Strawberry Racing team, while Robinson won the countback for third having ended up on equal points with Lahaye in the overall day results.

Last season’s Rotax DD2 Euro Trophy champion Xander Przybylak started Final 1 alongside qualifying pole-man Glenn Van Parijs, but the Belgian duo tangled as they went side-by-side out of turn 3, likely ending the title-holder’s opportunity to continue his unbeaten race record this weekend. The fight for positions saw the two dicing as the laps wound down. It was 19-year old Mathias Lund who leapt into the lead to take the eventual win from French star Paolo Besancenez and Czech Petr Bezel, who posted the quickest laptime to lead his brother Jakub to the finish, followed by Van Parijs. Light rain arrived again just as Final 2 hit the track for the 2-speed gearbox class, where everyone was out on dry tyres so the early stages of the race was more like a full-course yellow until the pace picked up after around five minutes. Petr Bezel grabbed the lead initially and was ultimately the fastest on track; until he was passed by Martijn Van Leeuwen who went on to take an impressive five-second victory. In the meantime, the action was non-stop further back and the chassis set-up choices played a significant role in the greasy conditions, together with who could stay on the black stuff without exiting the track until the very end. Mathias Lund was a close third then Jakub Bezel sporting a penalty due to an incident with Van Parijs, who would have actually been in P3, but was later removed from the results. Fifth place was Van Leeuwen’s Schepers teammate Jarne Geussens. Leading the championship points going into round 2 is first edition winner Mathias Lund for the Danish team RS Competition ahead of Petr Bezel by a gap of only one point to Martijn Van Leeuwen.

A new face in the Rotax DD2 Masters category has resulted in a new challenger this season where the last three series’ champions were also present in the line-up at Genk for the first round. The experience of Paul Louveau definitely showed in his Euro Trophy debut over the weekend, with the Frenchman taking race honours and setting the pace in both Finals Sunday to claim maximum points. The racing, as can be expected in the Masters class, was nevertheless eventful and exciting to watch, with present and past World #1 drivers in the mix as well. Belgium’s Ian Gepts led Final 1 to begin with, surrendering only to Louveau to beat the 2019 Grand Finals winner Roberto Pesevski in third, then came Swiss driver Alessandro Glauser ahead of Rudy Champion in P5. With the slicks on for the last race of the meeting, Final 2 saw Louveau hitting times around 16 seconds quicker at the front than the previous race and the battles heating up behind him. Pesevski and Champion were joined by defending champ Sebastian Rumpelhardt in a three-way race that became an epic fight between the latter, while Slawomir Muranski escaped early to chase the leader. The official results showed Louveau with a win of more than 13 seconds to Champion and Glauser, which was the day result as well for the top three, P4 was the another French driver Bruno Dos Santos and Tom Desair in fifth.

Find the event results here for each class

All the racing from the weekend RMCET Livestream coverage can be found on the Camp Company GmbH channel on YouTube and all session results on the Motorsports-events page online.

Direct links to the RMCET media and results from the Karting Genk round 1 event plus more details about the championship are on the official website - www.rotaxmaxchallenge-eurotrophy.com