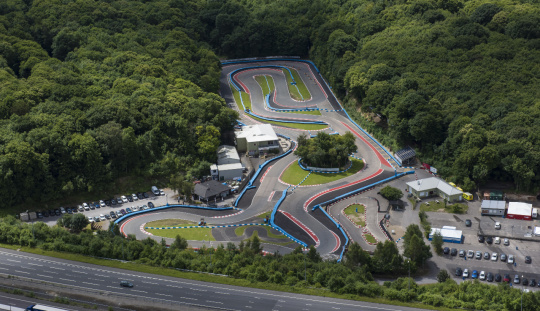 Press Release by: Buckmore Park Karting
The future of karting at Buckmore Park looks bleak after planning officers rejected an application that would have secured the Kent circuit’s ride out of the pandemic.
The owners had submitted an application to Tonbridge & Malling Borough Council to allow the circuit to rent out its unused overflow car park to commercial tenants and generate much needed income for the business, which was already struggling pre-pandemic.

However, despite lengthy pre-submission discussions, planning officers rejected the application without giving Buckmore Park the opportunity to put their case to councillors at a planning committee.

Commenting on the decision, Buckmore Park’s Rich Martell, said: “The combination of three lockdowns, not qualifying for the initial Government financial support, and the simple fact of a changing market, meant this application was effectively our last hope to save the business.

“The irony is that the planners have undermined their own policy of supporting community facilities for recreation, leisure and culture by blocking our ability to generate much needed revenue from an unused car park. By listening to a small but vocal group of private karters, the planners have failed to understand how the business operates and have effectively consigned Buckmore Park to the history books.”

Tonbridge & Malling planning officers said that by removing overflow car parking in the paddock area of the site – which was previously used by private owner-drivers – activities at the karting circuit would be severely reduced. However, it is four years since regular private owner events took place at Buckmore Park, with the circuit having focused solely on recreational karting for the public since November 2017.

As a sport, karting has changed over the last decade. Circuits like Buckmore Park now depend for their survival almost totally on the leisure market, such as office away-days, stag-dos or birthday parties, and have to compete against E-sports on games consoles. During the pandemic, in an attempt to cut costs Buckmore Park has had to reduce its workforce from 50 to just two members of staff.

Rich Martell added: “This rejection is hugely disappointing and we feel our proposals have been refused out of hand. We had dropped our plans for a new building on the site, and believe none of the original planning issues raised, such as operating hours, were insurmountable.

“Having been forced to close for more than 200 days in the last year, and not being in a position to reopen when lockdown measures ease, the opportunity to secure a commercial rent from the use of the paddock car park was our only hope of survival.”

The paddock is already permitted as an overflow car park, and in effect the planners have rejected the circuit’s plans to continue to use it is as a commercial car park, and generate much needed income for the business.

The owners are now considering their options, which include appealing this refusal or simply to close the circuit for good and put the site up for sale.
ENDS

Notes to Editors
If using the image attached with this press release we would ask that it is Attributed/Credited to Simon Burchet.