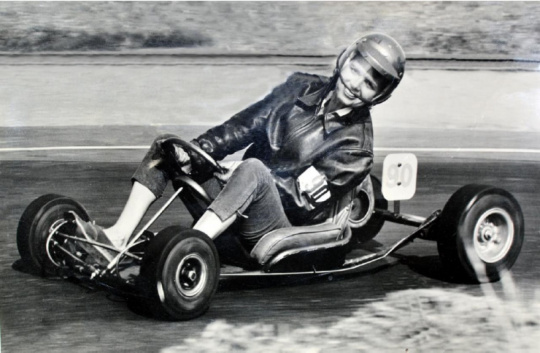 Author: Vroomkart International
President Gary Crawford of the Vintage Kart Club of America has made the sad announcement that Faye 'Ladybug' Pierson, the Queen of Karting has passed away (11 July 1928 – 6 March 2021).
Faye Pierson drove a kart for the very first time on Christmas Day 1957. Faye and her late husband Tom Pierson were initially introduced to karting by a neighbour who had purchased a kart kit as a Christmas gift for his teenage son. Tom Pierson kindly volunteered to help with the assemble of the kart and the two families went to a school parking lot in West Covina located within the greater Los Angeles area to experience karting for the first time that Christmas morning.
Once at the school car park everyone got to drive the kart. Faye just would not get off the tiny machine; driving it she later said was infectious. Faye was most definitely hooked that day on this new form of motorsport and soon her husband Tom was busy making karts for Faye and himself.

That was the very early days of karting in its birth place of Southern California and around the beginning of 1958 the Pierson’s along with family friend Dick Geer started making karts in a semi professional manner in the Pierson’s garage located in a Los Angeles suburb. The demand for the Pierson manufactured karts became so high that it was just not feasible to continue to make them in a domestic garage; a proper factory had to be sourced. Bug Engineering was formed and the Pierson kart manufacturing operations relocated to premises on Irwindale Avenue in the city of Azusa.
Previous to becoming a kart manufacturer Tom Pierson’s business involved the distribution of the then Los Angeles Mirror-Times newspapers which incidentally was were Faye perfected the art of driving fast as she made daily wholesale paper deliveries not that she openly advocated speeding on the streets.

The first ever National kart races were scheduled to be held at the Go Kart Raceway during the summer of 1959. That year Bug team driver Dick Geer won the Grand National title and Faye set the fastest time in the A class qualifying beating the track record by one full second. Faye went on to win her first heat, broke her chassis in race two and placed second in heat three, taking second place overall. Actually Faye taking part in the racing at that time was a milestone. In America sixty years ago racing was a sport that considered women to be signs of bad luck especially if they were found in places where they could possibly interfere with operations. Faye recalled on an occasion being asked to leave the pits at Indianapolis for that very reason!

During the early days of karting at the start of the sixties decade Faye 'Ladybug' Pierson, as she was known and her Bug karts travelled extensively throughout the United States and as far away as Europe racing in England and Italy. Back at the time of the English race, September 1961, she was one of only a few women to have her photo appear on the front page of the London Times. The photo, which also featured the World Champion at that time, teenager Bobby Allen, was snapped when the two disembarked together from the aircraft after landing in England on their way to the Banbury race at Shenington airfield.
Faye was very much accustomed to travelling by aircraft; both Tom and Faye held pilot licences and at weekends they would load her kart into the back of their Cessna and off she and husband Tom would go to wherever there was a kart race in the western part of the United States that warranted an appearance by Bug Karts.

Faye can most certainly be described as a pioneer of the sport because she was there at the beginning and thus instrumental in the involvement of women in karting. She was intelligent as well as being extremely easy on the eyes and soon she was appearing in television quiz shows filmed in studios associated with the Hollywood movie industry. Despite her celebrity status Faye remained a most approachable and helpful individual who always looked like a million Dollars.
Because of Faye’s iconic status she was chosen in 1962 to participate in an experiment sponsored by an American motoring magazine to determine the capabilities of kart drivers in sports and Formula Junior cars. The driving took place at the now defunct Riverside International Raceway. Faye put in some scorching and faultless laps in a Lotus 20 and then repeated her performance in a Lotus Junior. A three litre Austin Healey sports car was unfortunately her undoing, she lost it in a big way in the fast 'S' section and wrote the Healey off. A broken jaw and facial lacerations requiring 300 stitches were treated at the local hospital and thanks to skilful surgery Faye was soon her smiling self again. The accident put an end to her racing career by orders from husband Tom.

Twenty four years later in 1986 she was back in a competition kart at a track in Redlands, California, to prove that neither gender nor age were limiting factors particularly in the world of karting; Faye finished fifth that day.

Since then a lot of water has flowed under the bridge at Bug Engineering. The manufacturing plant on Irwindale Avenue was relocated to a purpose built facility at 950 West Foothill Boulevard, Azusa, California. Sadly Faye’s husband Tom died on 26 October 2000 leaving her solely in control helped by her sons Tommy and Jon. Not quite two decades later Faye had to deal with further bereavement when Tommy passed in September 2017.
From 1959 to 2014 the doors remained open at K & P Manufacturing the new name for Bug Engineering. During that time karts were manufactured across all the disciplines although a Bug was never homologated at the CIK. In the middle 1990’s Bug produced a model known as the FF-1 which was influenced by European design of that time. Around then the company also represented Birel and for decades beginning in 1978 K & P also acted as distributors for Bridgestone kart tyres. Later the main business for K & P was tire sales plus manufacturing replica copies of the rear engine Bug Sprint chassis that was first introduced in the middle 1960’s and the Stinger sidewinder kart from the early 1970’s. As well the fabrication of associated parts sought after by vintage karting enthusiasts to keep their historic Bug karts running also featured as a prominent part of the business.
In the beginning the Bug title was actually arrived at after a brain storming exercise to come up with a name for the Pierson kart; no suitable names were forth coming and Faye was reported to have said that the exercise was bugging her hence the name Bug!

As the years rolled by Faye thought that she was pretty much done with racing karts competitively but her long time friend, the late Tom Medley, the well known hot rod and karting writer at Petersen Publications, encouraged her to get involved with vintage kart racing. Faye returned to competition at the late Gus Traeder’s first Vintage Karting Olympics held at West Quincy, Missouri, in 2002. Since then she has been a regular on the Californian vintage kart scene and was guest of honour at the 2008 Numurkah Vintage Karting Grand Nationals held in Victoria, Australia. Faye has also on occasions attended Jeff Brown’s vintage extravaganza held each year in June at Mark Dismore’s pristine karting facility located at New Castle near Indianapolis.
For many years Faye hosted the karts of the Australian contingent who have competed at the Vintage Karting Association Reunion held each year during early February at the Adams Motorsport Park in Riverside, California. The event is actually called the Faye Pierson Vintage Kart Reunion in her honour. Faye generously allowed the Australians to use the Bug premises for their race preparation and helped with the transportation of their karts to and from the track.

Faye, who became a nonagenarian in 2018, was an inspiration to all who had been fortunate to have met her decided to finish up K & P as a manufacturing plant in the middle of 2014. Faye however had no intentions of disappearing from the American vintage karting scene; she retained part of the upstairs level of the old Bug plant and turned that area into a private museum dedicated to Bug karts.
Faye’s meritorious induction to the World Karting Association’s Karting Hall of Fame in 1989 as well as her induction into the Karting Hall of Fame in Talladega, Georgia, is proudly recorded in a section of her museum. 'Ladybug' continued to participate at vintage karting events close to her Californian home right to the end.

The sport of karting gave Faye Pierson hundreds of fantastic stories and experiences collected across a sixty year period. The Adams event named after her will always be a lasting memorial to Faye 'Ladybug' Pierson the Queen of Karting.