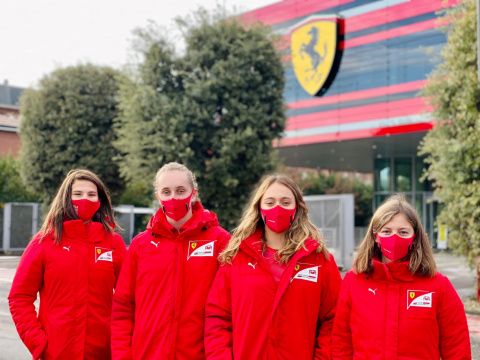 Author: Vroomkart International
The wait is almost over, tomorrow Friday 22 January, the Ferrari Driver Academy will have a new female face!
In the previous days we have told you about the path that the four chosen girls have faced, divided between psycho-physical activities and of course track activities. In the two days at Fiorano with the F4 cars. All of them have shown that they can progress and add experience to their personal baggage. Data and telemetry were analysed by the FDA staff who, tomorrow, will decide the winner.

As with any grand event, the awards ceremony will be broadcast tomorrow at 4.30pm live on Facebook (LINK HERE).

Michèle Mouton, President of the FIA Women in Motorsport Commission. "All four have shown great motivation and progression in recent months and should feel proud of their achievements. The knowledge they will take home is invaluable to further develop their careers, both on and off the track, and I wish them all much success."

Mario Isola - Head of F1 and Car Racing Pirelli: "For Pirelli it is a great pleasure to support this initiative because it is absolutely in line with our tradition of supporting young driver programmes, which is something we have been working on together with the FIA for many years. With the FIA Girls on Track - Rising Stars programme, we share a common goal and mission with the FIA and Ferrari: to promote the progression of young women in motorsport, to support equal rights and opportunities on the track and in everyday life".

So let's get to know better the four possible winners of the contract with Ferrari Driver Academy and next participants in the 2021 F4 Championship.

Maya Weug
Maya has a lot of experience in international karting, always present in all the categories she has competed in so far. Winner also of the 2016 WSK Final Cup, second in the 2015 Spanish Championship and author of several placings in the last years with Birel Art Richard Mille colours in the OK category.

Antonella Bassani
Second name for Brazil thanks to Antonella Bassani. The finalist's karting career has been purely national with good placings in the "sulbrasileiro" championship. Bassani also boasts important results in the Rotax field, such as the eighth place in the Micro Max Grand Finals in 2017. In 2020 she competed in the Junior category.

Doriane Pin
The French girl is the only one of the finalists to have already competed more than one race in a category other than karting. After finishing fifth in the French Junior Championship and winning the 2019 Women's Championship, Dorian in fact took part in six rounds of the Renault Clio Cup France 2020, winning in the Junior category.

Who will be the winner?