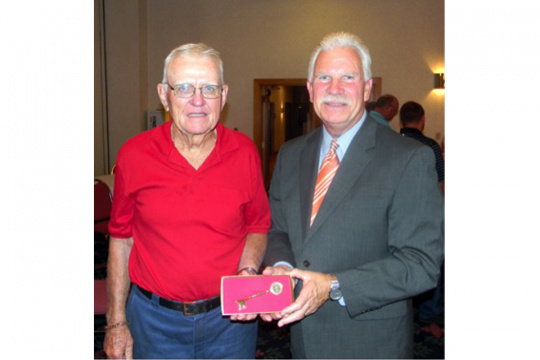 Author: Vroomkart International
Thank you Pearl for all that you did for American karting/December 1935 - January 2021
Friday night the 7th of September 2012 was a proud occasion for New Bloomington, Ohio, resident and longtime kart racing enthusiast Pearl Gamble when he received the keys to the city of Quincy, Illinois, from Mayor John Spring.
Over one hundred vintage karting enthusiasts assembled in the City Centre Hotel in downtown Quincy to hear Master of Ceremonies for the evening, the late Gus Traeder, recount Pearl’s karting achievements.

Gus began by relating how Pearl’s twin brother Vearl was instigative in getting the Gamble boys started in karting back in 1960. At that time Vearl asked Pearl to go with him to a race at a small dirt oval in Richwood, Ohio. Soon after that first karting experience Vearl purchased a used kart and Pearl was appointed to the position of crew chief in the Gamble brothers kart team. That did it for Pearl; he became hooked on karting and later that season Pearl also became a kart owner.
Pearl’s first race was at a dirt oval in Larue, Ohio. After going one lap behind he managed to finish third. His award from that race is still proudly displayed in his trophy cabinet.
A couple of years later Vearl decided that he was finished with karting and stopped. Pearl continued to race four and five times a week at the small dirt oval that had been constructed behind the Gamble home. Entry fees at the Gamble track then were the pricey sum of 50 cents!

After two years of racing on dirt Pearl heard about the Dart Kart Speedway in Mansfield, Ohio, which was part of the Rupp complex. Since he was very fast on dirt he thought racing on asphalt would be easy. Boy was he wrong; he finished last in the 100cc Open class at his first Mansfield race.  Dart Kart Speedway then was a magnificent facility and only the best of the best raced there. It would take Pearl three seasons before he was victorious at the Mansfield track.
However the race after his maiden victory at Mansfield turned out to be a disaster. His super engine, a McCulloch MC40 that he alone had spent many hours modifying blew into a million pieces. Not deterred he continued to race, and in 1966 he attended his first national event at TNT Kartways in Quincy. Pearl qualified third and finished in fifth position. His trophy from that event still has pride of place in his display at home. In the following years Pearl won six national championships competing in the B Stock Piston Port and US 820 classes. Pearl won the last of his six WKA titles at age 64.

In 1995 the World Karting Association which Pearl had a hand in forming back in 1971 inducted him into their National Hall of Fame.  In 2011 he was further honoured when he was inducted into the Vintage Karting Hall of Fame at Newcastle, Indiana.
In his acceptance speech Pearl said, “Recognition by American karting’s governing associations of vintage and modern day karting was a very pleasant surprise as well as a great honour.”
In his later years Pearl continued to enjoy karting, albeit the vintage variety, every bit as much as he did when he started out in the sport back in 1960. Pearl said, “It’s the company of all the friends that he has made through karting that he enjoys and that he has no plans to retire from vintage racing; if you have a break down or just need advice all you have to do is ask and everyone will help”.
Thank you Pearl for all that you did for American karting during your adult lifetime; Requiescat In Pace.
Written: Frank Weir; Photo: Frank Weir