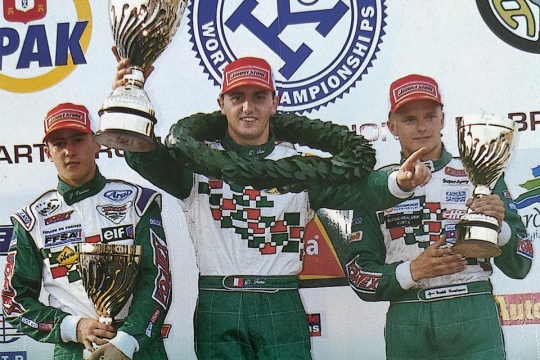 Author: Vroomkart International
The Tony Kart/Vortex team wins all three tiers of the podium at the OK World Championship in Portimao, thanks to British driver Callum Bradshaw's victory ahead of compatriot Joe Turney and Spaniard Pedro Hiltbrand.
It is certainly the greatest milestone for a team to conquer the entire podium at a Fia Karting World Championship. It is synonymous with absolute domination. The Vortex-powered Tony Kart thus returns to victory in the world's most important karting event after a fast of 8 years, when with the Roman Flavio Camponeschi they climbed atop the highest step of the podium in Macao.

But it is not the first time that the green-liveried Prevalle-based team takes full bounty in a World Cup in direct drive. It was in the year 2000, the category was the FSA 100cc debut with liquid-cooling circuits and Ø 32 carburetors. And it so happens that the same result was again achieved in Portugal, albeit on a different track, namely in Braga. In 2000, it was Davide Foré who climbed the top step, flanked by the French driver Frank Pereira and the Finn Heikki Kovalainen, all obviously on Tony Kart/Vortex.