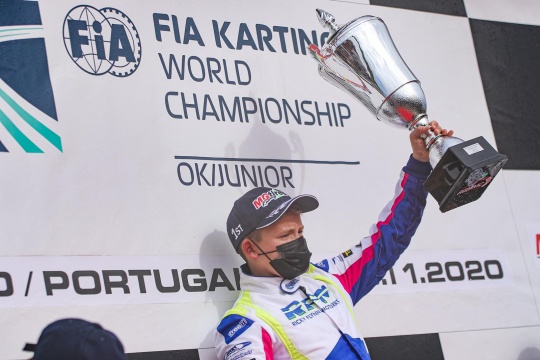 Author: Vroomkart International
At the Portimao karting track, the OK and OKJ World Championship concludes the FIA Karting season. Callum Bradshaw and Freddie Slater are the new World Champions. Fear for the terrible accident in OK between Andrea Kimi Antonelli and Maya Weug.
OK - Powerful Bradshaw and Champion, fear on lap two
The very final Senior plate had two important moments during the Portuguese afternoon. After the lunchtime rainstorm, the Algarve go-kart track, which in any case was too flooded to think of a dry race. After the first chaotic start, on the second lap of the race there was a twist on the straight with the frightening accident involving Andrea Kimi Antonelli (KR) and Maya Weug (Birel Art). A confused dynamic that saw the Spanish girl spin over and then take off and land rolling on the asphalt (with no consequences). Antonelli, paraded backwards at the start, was completely stuck on the whole of his kart after being hit in a straight line. From what he learned on the track, Antonelli was blocked by the front of the chassis and the steering, bent after the bang. The young man from Bologna was unfortunately transported away in an ambulance with repercussions on his left leg (information currently being updated).
After the consequent red flag, the race restarted with the same positions giving life to the world show. Callum Bradshaw (Tony Kart), who started in second position, immediately got rid of Barnard and flew towards a stunning victory with more than eight seconds ahead of the competition. The race was conducted in full English style in the rain at Portimao, which was decisive for the title victory. Behind the British rider, it's a big party at Tony Kart's home with Joe Turney and Pedro Hiltbrand in second and third place respectively, authors together with Bradshaw of the resounding hat-trick. Weekend considering for Hiltbrand, back upstairs, the same for Turney with six overtaking comebacks. Morgan Porter (Argenti Motorsport) was fourth, Taylor Barnard (Rosberg Racing) fifth after an initial pole position at the end of the heats.

OKJ - Freddie Slater Champion in the rain
The Junior final opened the World Championship dances. Under the flood of lunchtime, despite the risk of a red flag, the race went on stage in any case delivering a new Champion to history. In the weather conditions closest to him, Freddie Slater (RFM) had no choice but to use his race pace to recover two positions and seize the final success, not without effort. In the final laps, the fight for the title became a British affair with Arvid Lindlad (KR) back in the limelight in the last two rounds. Lindblad tried to take the lead in the race, succeeding but only for a moment, then having to give way in the final corners to a great Slater at photofinish. After the five-second penalty for the incorrect front nose position, no podium for Lindblad and therefore promotion to Vice World Champion for Tuukka Taponen (Tony Kart), more than positive over the weekend with seven positions recovered, third surprise Harry Burgoyne (KR). Fourth was Christian Ho (Sauber), who took pole position and was the victim of contact with Lindblad, fifth after the penalty.
RACE RESULTS