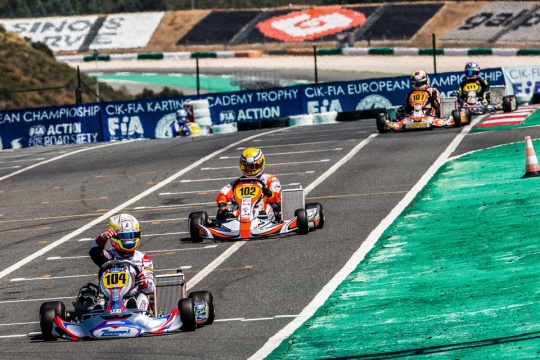 Author: Vroomkart International
We retrace the highlights of what happened on the Portuguese track during Round 2 of the Cik Fia OK and OKJ European Championship.
The world championship event in Portimao is certainly an exclusive event for the track that for the first time hosts a world championship competition in the OK category that will be remembered also and, above all, for the critical moment the world is experiencing due to the Covid-19 pandemic.

Expectations for the final victory of the most coveted title by every kart driver recognized by the FIA are thus laid fown starting with free practice and then the official qualifying times on whichever driver is fastest.

But the candidates eligible to conquer the coveted world title shall have to overcome difficult exams this weekend, regardless of the times they set. And the heats, first of all, will already be the first important test bench to understand who among them will be able to aim for that final objective.

While waiting for a clearer situation of who will be the protagonists of this world event, let us remind you that the last time OK and OKJ landed at Kartódromo Internacional Do Algarve was in 2016 for the second round of the Cik FIA European championship.

The edition of that European was one of the most captivating of the new millennium. And in Portimao on that occasion it was Marta Garcia Lopez (Evokart/Iame) to set the best time in qualifying, stopping the clock at 55.681 seconds. We recall that the Spaniard indeed left her mark, confirming herself as the fastest of the qualifying rounds in all the events of the continental event that year.

In 2016 the regulation added, besides the qualifying points, also those of the pre-final and the final. While today, as you well know, the pre-final is no longer held and points are assigned to the top ten in the heats and to the top 15 in the final.

In the final, Tom Joyner excelled in front of Ben Hanley and Pedro Hiltbrand. Karol Basz set the best time in the final in 56.213.

In the end, the European was conquered by the Spaniard Pedro Hiltbrand, thanks to his second place in Genk, the last stage of the European Championship, ahead of Tom Joyner and Polish driver Karol Basz in the general classification. Marta Garcia Lopez finished 4th.