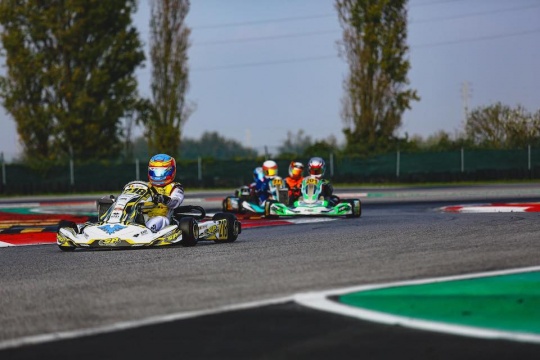 Press Release by: AG Media and Management
The last act of the Rotax MAX Challenge Euro Trophy took place at the Adria Karting Raceway, with Tom Braeken among the protagonists in the Junior MAX.
The Belgian driver performed well in the final round of Adria (after the cancellation of Genk’s round), confirming himself among the fastest all weekend, despite the long absence from the Rotax racing circuits. After obtaining the best lap in the last free practice session, Braeken obtained the 5th position in timed practice, conditioned by the rain that fell on the circuit just before the start of the session.
In the qualifying heats on Saturday, the track was once again dry, a condition that gave prominence to the Belgian driver. Thanks to 3 heats concluded in the top 3, one of which he won, Braeken earned the start from pole position in the first race on Sunday.
In race 1, Tom fought hard to get the best possible result, crossing the line in third position. In Race 2, a contact compromised Braeken's race, which he then finished in 12th position, thanks to an excellent comeback.
Adding up the scores, the SP Motorsport driver obtained the 6th final position, a result that would have been very different without the bad luck of Race 2, but which still makes Braeken among the best of the lot in Junior MAX.
Tom Braeken, SP Motorsport: “The weekend was positive, the pole position after the heats and in general the pace we had on a dry track was really noteworthy; unfortunately a few situations were unfavorable. I want to thank everyone who supported me, the SP Motorsport team for the fantastic vehicle, and Stan for always being by my side.”
© M. Segato