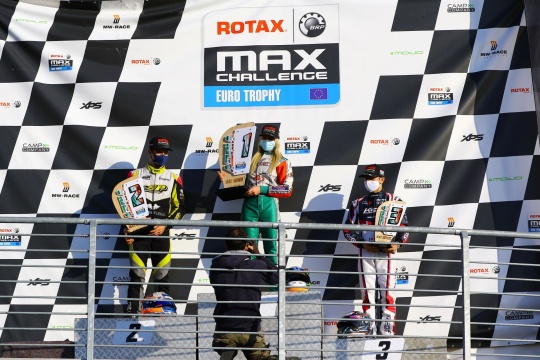 Press Release by: Rotax Euro Challenge
Gunskirchen / Adria, October 27th, 2020 – The Rotax MAX Challenge Euro Trophy has herald-ed the final spurt of the 2020 racing season.
The penultimate event of the championship took place on the Adria Karting Raceway, near Venice, from October 23rd to 25th. After stops in Belgium and Germany, the race in Italy opened the decisive stage of the four-round series. Despite the increasingly tense situation surrounding the COVID-19 throughout Europe, a total of 115 drivers from 23 nations made their way to the 1,302 metre-long track, facing another high-level competition of Rotax racing. In addition to the classic RMC Euro Trophy classes of the Juniors, Seniors, DD2 and DD2 Masters, the Micro MAX and Mini MAX categories were again included in the program for the younger racers.

Mees Houben (GKS Lemmens Power) was the benchmark in the field of the youngest participants of the RMC Euro Trophy. The Dutchman set the fastest time in qualifying and made perfect use of his pole position during the heats, which saw no-one else winning, but him. Houben also remained unbeaten in both the final races on Sunday. With a double win, he took first place in the day’s classification. Behind him, Swiss driver Paul Schoen (MH Racing) prevailed in second place against Luka Malbasa (AKSK Crvena Zvezda) of Serbia in the fight for the further podium positions.

In the field of the Minis, Veljko Vranic (Energy) succeeded in qualifying. With a lead of just 0.043 seconds, the Serb was able to secure the best starting position for the heats. However, during the heats on Saturday Mateja Radenkovic (Bouvin Power) took the reins. With three wins, he boosted himself to the top of the ranking, making him a favourite for the finals the following day, which he dominated as well. In each of the races, the Tony Kart driver was the first to cross the finish line with a clear lead. As a result, he was rewarded with the overall win on the day. Second place went to the Belgian Karel Staut (PG Motorsport), who finished both races second, while Dutchman Reno Fernon Francot (GKS Lemmens Power) completed the podium in third. 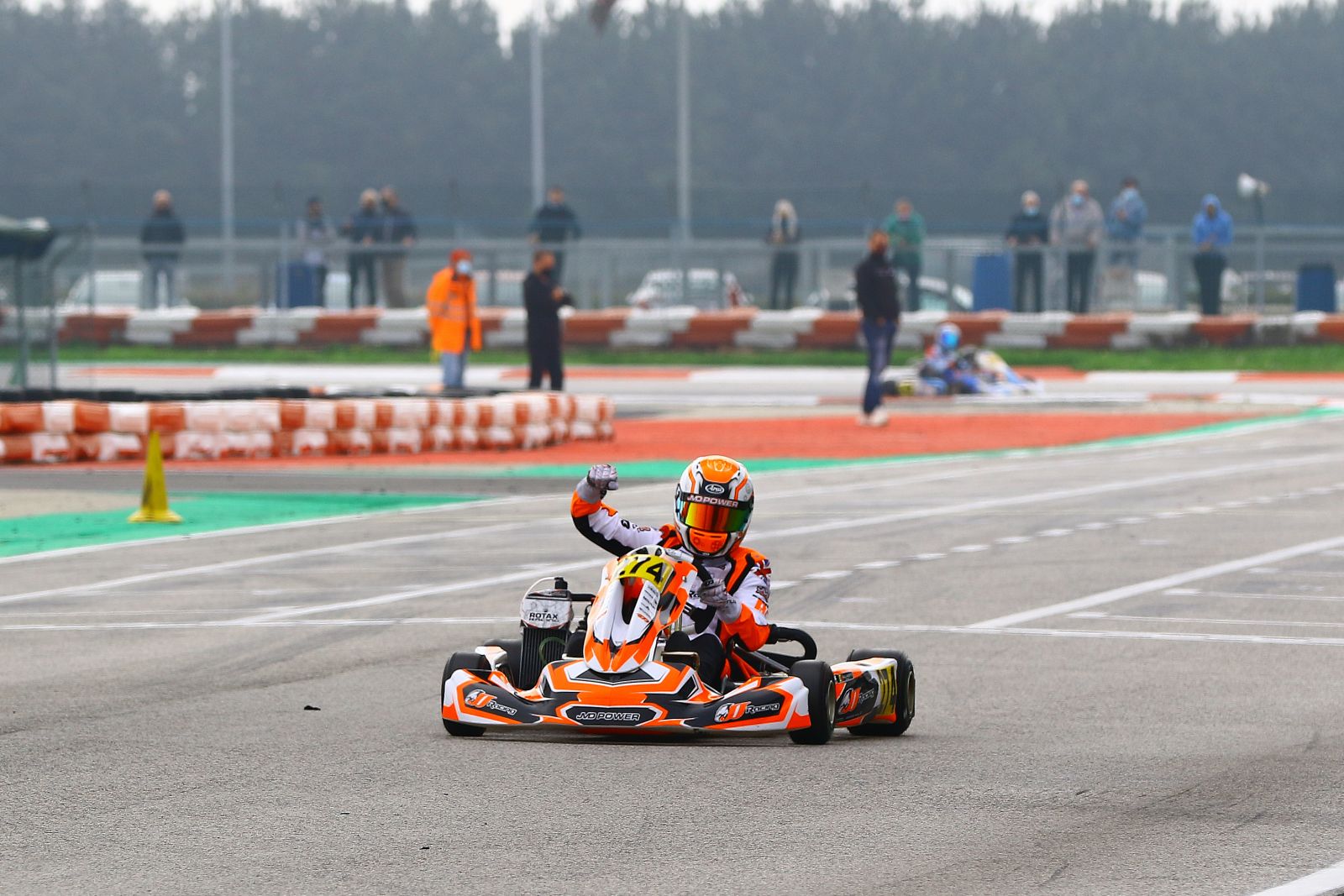 The juniors displayed a competitively balanced field. In the qualifying, Christiaan De Kleijn (CRG Holland) set the pace, although he had to make way for his opponents during the heats – especially to Belgium's Tom Braeken (SP Motorsport). The rookie took the victory in one heat, finished second and third in the others, which meant he would start from pole position for the final day. But it was championship leader Kai Rillaerts (JJ Racing) who rocked the boat! Having only qualified in the middle of the grid Friday, he fought his way back into the top five in the heats. In the finals, the young Belgian put on a brilliant performance to win both races with a clear gap. As a result, Rillaerts also took the triumph in the day's standings and then had another reason to celebrate: considering the drop results, he gained enough points to already secure the 2020 championship title before the final meeting at Genk. Behind the newly crowned champion, Christiaan De Kleijn finished second in the day's ranking ahead of the German Farin Megger (Kartschmie.de), who was able to take his best result in the RMC Euro Trophy so far. 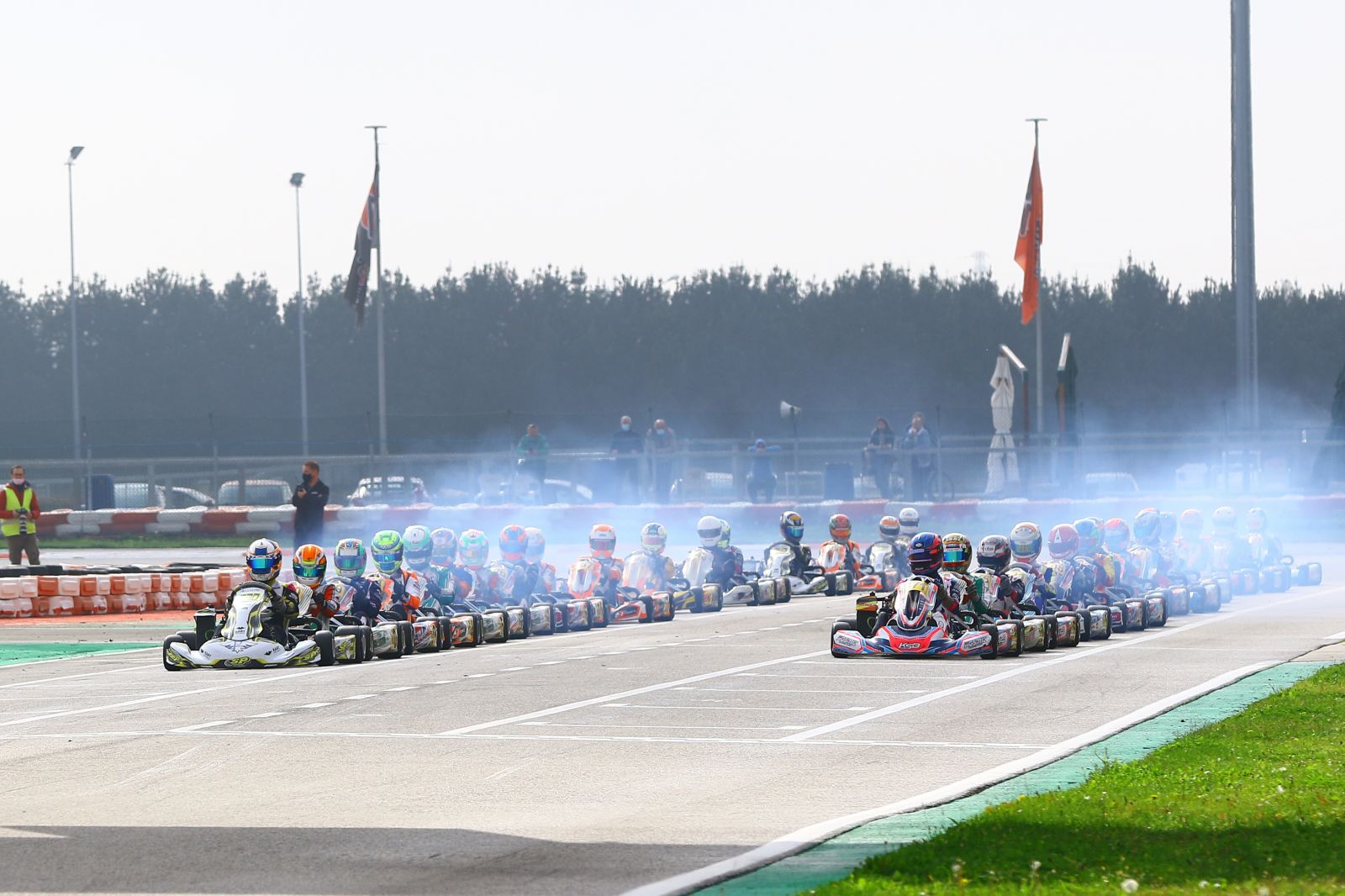 Mathilda Olsson (Strawberry Racing) once again proved her exceptional position in the senior MAX category. Yet, the weekend did not start according to plan for the reigning champion. In qualifying she ranked P8, where Hungary’s Zsombor Kovacs (KSB Racing Team) set the fastest time. In the heats, the Swede made her way up the order to rank third, while RMC Euro Trophy Winter Cup champion Juho Valtanen (SP Motorsport) topped the competitive line-up and claimed pole position for Sunday. The Finn continued his strong performance in the first final, but lost out in a photo finish to Olsson after 18 laps of racing. In Final 2, the pole-sitter stepped it up a notch and complemented the double victory with a winning margin of 1.3 seconds. As a result, she significantly expanded her lead in the overall standings, providing the best chance to defend her crown at the season finale in Genk. Second in Adria went to Juho Valtanen, who crossed the finish line in P2 in both final races, while local hero Elia Galvanin (KSB Racing Team) from Italy took third place on the podium.

Michael Rosina (54 Squadra Corse) was the pacemaker in the DD2 class. The Italian set the pace in qualifying on home soil and was unbeaten in the heats too. He continued his dominance in the first final, which he won with an impressive lead. But in the decisive second final, it was Daniel Machacek (Machacek Racing Team) who put himself in the spotlight. The Austrian took the win and prevented Rosina making it a walkover. In the end, the two race winners were tied at the top. Since Machacek won the higher rated second final, he was awarded first in the day's classification. Championship leader Xander Przybylak (Bouvin Power) from Belgium completed the podium in third place.

Sebastian Rumpelhardt (RS Competition) was in command of the Rotax DD2 Masters, which was integrated in the field of the DD2 class at round 3. The German was at the top from start to finish and took over the lead in the championship with the double victory. The further podium positions went to Sei Priit (TGT Racing) from Estonia and Frenchman Rudy Champion (PKS Competition) in Adria.

Meik Wagner, organizer of the RMC Euro Trophy, summarized the weekend: “With regard to the situation of COVID-19, times are currently not easy for us as organizers. Therefore, we can be really happy that we have been able to run the event in Adria smoothly with a comparatively big field. I am now looking forward to the final round in Belgium and hope that we experience a worthy end of this really outstanding season."

Now, the RMC Euro Trophy is anticipating the big season finale, which will take place from November 6th to 8th. For this occasion, Europe's RMC elite will return to Karting Genk, Belgium, after already opening the 2020 season in Flanders. The so-called “Home of Champions” could not be a more suitable venue to crown the four new champions. The award of a total of nine RMC Grand Finals tickets and other valuable prizes will make for a really thrilling showdown. All information about the Rotax MAX Challenge Euro Trophy is available on the web at www.rotaxmaxchallenge-eurotrophy.com.


About BRP-Rotax:
BRP-Rotax GmbH & Co KG, a subsidiary of BRP Inc., located in Gunskirchen, Austria is a leader in the development and production of innovative 4- and 2-stroke high performance Rotax engines for BRP products such as Ski-Doo and Lynx snowmobiles, Sea-Doo watercraft, Can-Am all-terrain, side-by-side vehicles and Can-Am Spyder lineup as well for motorcycles, karts, ultra-light and light aircraft. In the last 50 years, the company has developed more than 350 engine models for recreational vehicles and produced over 9 million engines.
www.rotax.com
www.rotax-kart.com

About BRP
We are a global leader in the world of powersports vehicles and propulsion systems, built on over 75 years of ingenuity and intensive consumer focus. Our portfolio of industry-leading and distinctive products includes Ski-Doo and Lynx snowmobiles, Sea-Doo watercraft, Can-Am on- and off-road vehicles, Alumacraft and Manitou boats, Evinrude and Rotax marine propulsion systems, as well as Rotax engines for karts, motorcycles and recreational aircraft. We support our lines of product with a dedicated parts, accessories and clothing business to fully enhance your riding experience. With annual sales of CA$5.2 billion from over 120 countries, our global workforce is made up of around 12,500 driven, resourceful people.
www.brp.com