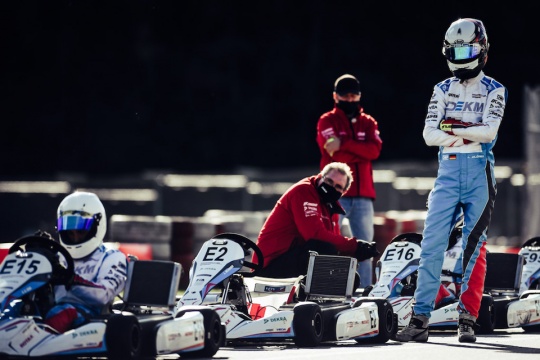 Author: Vroomkart International
It’s over. The 2020 DEKM racing season celebrated its last round at the Motorsport Arena of Oschersleben last weekend, and Lucas Wlömer won the title.
Once again, the weather was a central factor. This made the fight for the victories even more exciting. Diego Stifter won Race 1 as Axel La Flemme triumphed in Race 2.

The weekend started in the best way possible for Wlömer, who took the pole position, but the difficult conditions extolled Stifter who managed to win Race 1. La Flemme, who won the Pre Final, joined the Final’s pre-grid too late and this forced him to start from the back of the field. Later he was also forced to retire from the race.

Axel La Flemme took the pole position, and then he won both Prefinal and Final. He was the driver who had the best feel with the wet track. Behind him, Joel Mesch and the champion Wlömer fought hard; at the end, Wlömer won the 2nd place, which allowed him to grab the 2020 title.

In addition to winning the championship, Wlömer can look forward to a lot more to. Porsche Motorsport accompanies him in the racing driver development with various training programs. In addition, he receives a test day in the Porsche 718 Cayman GT4 Clubsport with Team Allied Racing and an Arai karting sport helmet voucher from DEKM partner Point Racing.

At the same time, champion Wlömer and runner-up Mesch will be invited to the Rotax MAX Challenge Grand Finals in Portimão, Portugal. The two are supported by Jasmin Stein, who was drawn among the DEKM participants and receives the third ticket for the World Final in Portugal.